Gov. Tim Walz has announced a $2.7 billion package of building projects that would be the biggest bonding bill in state history. However, the final bonding bill will be the result of negotiations between the governor, the House and the Senate. The governor and Lt. Gov. Peggy Flanagan unveiled the proposal Tuesday morning during a press conference.

"For Minnesotans to know, this is your property," the governor said outside a construction project underway on the University of Minnesota Campus. "These are assets that belong to the people of Minnesota."

The bonding bill he proposes would borrow about $2 billion through general obligation bonds with the other $700 million coming from a combination of cash and other financing methods. The governor says even with a projected $7.7 billion budget surplus, it makes sense to borrow money for long-term investments. "The bonding bill that you heard about is an investment much like your home, whether it be in replacing windows or roofs or adding an addition when your family grows," he said.

"In 2020, we passed the largest jobs bill in state history, investing in the projects that local communities told us matter most to them. Now with Minnesota’s strong economic outlook, we have an opportunity to make even more progress," Walz said. "With a focus on projects like roads, bridges, fire stations, and veterans homes, our plan will repair and replace critical infrastructure and improve the lives of Minnesotans in every corner of the state."

University of Minnesota President Joan Gabel says the $213 million earmarked for the university system would have a direct impact on students. "With investments at the university it helps us invest in our students in unique ways and allows us to have a widespread impact on their learning, our research and the student experience," she said at the news conference with the governor. 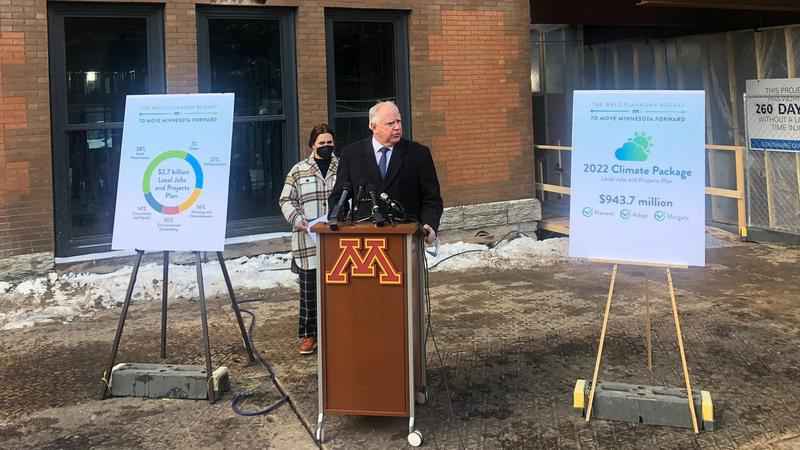 The 2020 bonding bill totaled nearly $1.9 billion. A more detailed breakdown of the bonding proposal can be seen online.

Lawmakers head back to the Capitol on Jan. 31 and will have to decide how to spend the projected state surplus of more than $7.7 billion.