The White House has already said there will be no national vaccine mandate.

"Let me be very clear on this, and I know there have been lots of questions: The government is not now, nor will it be supporting a system that requires Americans to carry a credential," White House Press Secretary Jen Psaki said Tuesday.

"There will be no federal vaccinations database and no federal mandate requiring everyone to obtain a single vaccination credential," she added. "As these tools are being considered by the private and nonprofit sectors, our interest is very simple from the federal government, which is Americans’ privacy and rights should be protected so that these systems are not used against people unfairly." 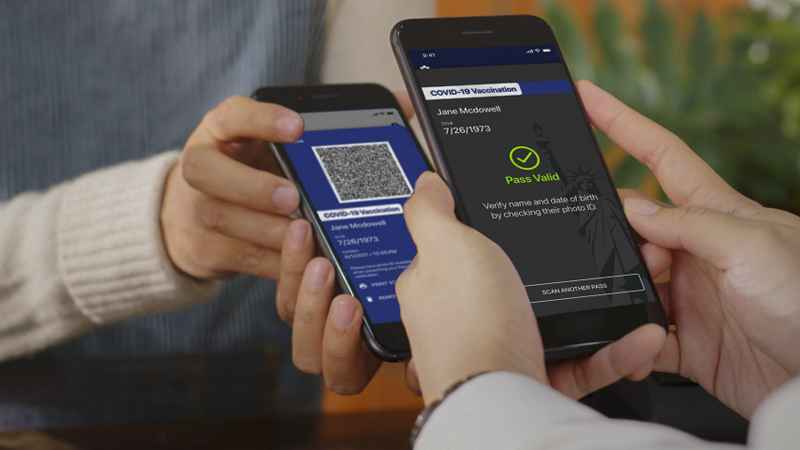 In this undated photo, provided by NY Governor's Press Office on Saturday March 27, 2021, is the new "Excelsior Pass" app, a digital pass that people can download to show proof of vaccination or a negative COVID-19 test. Vaccine passports being developed to verify COVID-19 immunization status and allow inoculated people to more freely travel, shop and dine have become the latest flash point in America’s perpetual political wars, with Republicans portraying them as a heavy-handed intrusion into personal freedom and private health choices.[NY Governor's Press Office via AP]

However, states appear to be taking their own stances on the subject.

New York recently launched an Excelsior Pass. The digital app will work like a boarding pass, which participating businesses and venues can scan to verify a person’s proof of vaccination or proof of negative COVID-19 test results. Some major venues, including Madison Square Garden, have announced they will begin using this technology in the coming weeks.

Meanwhile, states like Texas and Florida are banning the use of government-mandated vaccine passports. Florida Gov. Ron DeSantis said he also plans to block businesses from requiring proof of vaccination over concerns it would create two classes of citizens based on vaccination status.

5 EYEWITNESS News asked Walz where Minnesota stands on this issue.

Still, even without a state or federal mandate, private businesses throughout the United States are making their own rules.

Norwegian Cruise Lines, for example, announced that proof of vaccination will be required for all passengers and crew members. Colleges, including Brown University and Rutgers University, have also said they will require students to get vaccinated by next fall unless they have a medical or religious exemption.

KSTP medical expert Dr. Archelle Georgiou said the topic of immunization requirements is not new, but there are some gray areas when it comes to the current pandemic.

"Back in the 1930s, the World Health Organization started issuing yellow cards that people would use to travel internationally, and it would prove they had received certain vaccines. A vaccine passport, conceptually, is no different than the yellow vaccine cards that we’ve been using for decades," Georgiou explained. "I think the really big question mark is that the vaccines currently have emergency use authorization, but they don’t have FDA approval. Legally, that’s where it becomes a very gray area."

"Imposing a vaccine requirement at this point in time feels a little premature. We don’t know how long immunity lasts when you get a vaccine, so there are still so many scientific details we haven’t figured out," Georgiou said.

She said vaccine passports have become another polarizing topic in the pandemic and there are concerns over how it is playing out across the country.

"Once again, we’re going to have a patchwork quilt of rules, which is just a bad foundation for more confusion and more chaos," Georgiou said.