Hennepin Healthcare is using cuddly creatures to help ease anxiety in the hospital. For the last few months, three Twin Cities women have been sewing "worry monsters" and dropping them off at Hennepin County Medical Center.

“They’re soft and cuddly and so it just seemed like a great idea for kids,” said Hannah Lakin.

The worry monsters are stuffed animals with a zipper mouth. Patients can write down their worries, put the piece of paper in the mouth pouch and zip it shut. Later, hospital staff or family or friends can open the mouth, pull out the paper and address the concerns.

Lakin has sewed as many as 40 worry monsters for the hospital.

“People have so many worries that we don’t express and this is one more way to express them,” Lakin said. 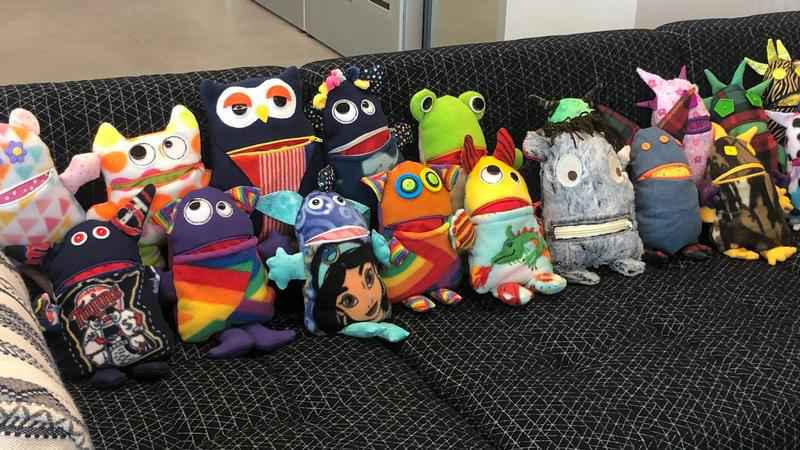 She was approached by the hospital’s volunteer service manager in the spring of 2021. Lakin had been dropping off hundreds of homemade masks during the pandemic.

“It was nice to have something to do that was helping someone,” Lakin said. “I love to sew.”

As the vaccine rolled out and mask mandates lifted, the hospital no longer needed masks.

Lakin, along with two other volunteers, Jocelyn LaBerge and Vicki Christensen, were asked to make the stress-relieving stuffed animals instead.

“I thought it sounded really sweet and thoughtful,” LaBerge said.

LaBerge and Christensen are good friends and also made hundreds of masks for the hospital during the pandemic.

“We were looking at being stuck at home,” LaBerge said. “We wanted to do something to contribute so we decided, well, maybe we can make masks.”

Christensen added, “We wanted to help.”

None of the women had heard of "worry monsters" before. LaBerge and Christensen went online to find a pattern but, unable to, they decided to create a template from scratch.

“Once the first one was done, we just sort of looked at it and thought these are cute and they’re funny,” said LaBerge.

It became another way for the friends to stay connected.

“When we first started, I hadn’t been in Jocelyn’s house for 15, 16 months so we were still meeting out on the front porch,” Christensen said. “Just trading, physical exchanges, to see what the [worry monsters] looked like.”

LaBerge added, “I would make one and give it to her and she’d, ‘Oh, OK, you’re doing this,’ and then she’d have some, ‘I’m doing this with the feet,’ and […] I’d borrow it. So we were bouncing ideas off each other and modifying based on what works and what’s fun.”

Meanwhile, Lakin created her own worry monster pattern. She didn’t know the other two sewers at the time.

The volunteers drop off dozens of monsters about every other week. Hennepin Healthcare Child Life Specialist Katie O’Hearn hands them out to her young patients.

“Kids love it, for starters, it’s kind of like a stuffed animal,” O’Hearn said. “They are adorable and cute and squishy and it’s really easy for kids to use their imaginations and imagine that worry monster gobbling up their worries so they can move on to something else.”

She initially came up with the idea of using worry monsters after working with a particularly anxious patient.

“We are just so thankful for our volunteers that have jumped into this with such excitement and enthusiasm,” said O’Hearn.

They’ve become a tool to address a wide range of concerns, from patient worries over the outcome of a procedure to their fears about a loved one’s condition.

“There was a week where we had quite a few very, very anxious kids,” she said. “We were able to talk through those worries. It helped them cope better in the hospital, it helped them move past those things that were really scary and figure out things that we could do concretely to make it easier for them.”

The worry monsters are so popular that they’re now used across HCMC to help patients of all ages.

“We pass them out in pediatrics, in our burn unit, in our [pediatrics] ICU, in our adult ICUs, in our addiction medicine program, in our mother-baby program,” O’Hearn said. “It’s throughout the system we’ve been using them.”

O’Hearn said the cute creations seem to bring just as much relief to adults as they do to kids.

“When we’ve had such a rough year and a half any little bright speck, anything positive anything that can help is a great tool,” she said.

The worry monsters are also bringing joy to the women who make them.

“You have this magic moment when everything is inside and you can’t see it and then you turn it right side out and suddenly you see the whole thing with the face,” Lakin described. “Everyone is just a little different and a little magical.”

Lakin met LaBerge and Christensen this week, each equally as excited to get to know the person behind the designs.

Each stitch has created a connection between these volunteers and the community as well.

“With the masks, they go out and you don’t always get feedback unless it’s for friends or family,” LaBerge said. “With these, the really fun part has been the excitement and the comments that we’ve gotten back from people.”

Christensen added, “It makes you feel motivated and appreciated and you just keep going.”

The friends estimate they’ve made more than 100 worry monsters so far.

Hennepin Healthcare doesn’t need any more sewers for this project. If you’d like to help through a donation, however, contact volunteer services.