The head of U.S. Bank is now apologizing for what is being called a classic example of “Banking while Black” after a customer was accused of fraud and put in handcuffs while trying to cash his paycheck.

As 5 INVESTIGATES first reported this week, a U.S. Bank branch manager in Columbia Heights called police to report a “possible fraudulent check” and a suspect posing a threat.

Joe Morrow’s check was real, but police body camera video shows the manager didn’t call to verify that fact until after Morrow was in handcuffs.

“I am deeply sorry for where we have failed,” U.S. Bank’s Chief Executive Officer Andy Cecere wrote in a letter Friday. “What Mr. Morrow experienced is not the experience that any customer should have.” 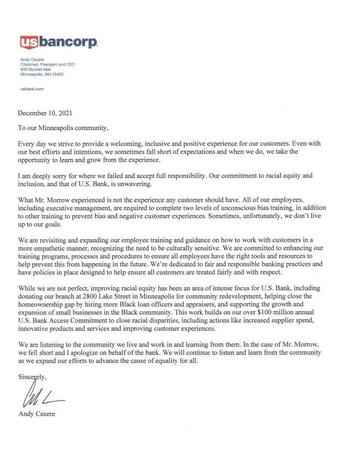 The apology came days after 5 INVESTIGATES reported on the police body camera video that outraged racial justice advocates, civil rights attorneys and other people of color across the country who shared similar experiences.

BREAKING: @usbank CEO issues apology for incident w/Black customer accused of fraud and cuffed trying to cash his paycheck. Total reversal from earlier statement to @KSTP that there was "nothing to indicate" race was a factor. Watch the body cam video: https://t.co/GWv0DJjvfR pic.twitter.com/2Jg1sJcM0n

U.S. Bank reached a confidential settlement with Morrow last month according to his attorneys, just weeks after 5 INVESTIGATES started asking questions about the incident.

A company spokesperson issued two previous statements saying U.S. Bank disputed the portrayal of the incident and added that the bank’s own internal investigation found there was “nothing to indicate” Morrow’s race played a factor in how he was treated.

“I think that their response is appalling. We all have eyes. We all saw the same video,” Levy Armstrong said. “They can’t just put on their website that they value diversity and inclusion and equity and then when they have the opportunity to live those values to turn the other way. It’s not acceptable.”

Less than 24 hours after her group demanded more accountability, U.S. Bank released Cecere’s letter to the community, stating that the company is “revisiting and expanding” employee training.

A spokesperson confirmed the branch manager who called police on Joe Morrow is still employed with U.S. Bank and that it is “reviewing the situation.”