UPDATE: Frey wins reelection after second round of ranked-choice voting is counted

Follow the latest updates on the mayoral race in Minneapolis below.

MINNEAPOLIS (AP) — Minneapolis Mayor Jacob Frey was reelected to a second term, surviving a bitter challenge in a race that focused on calls for changes to policing and racial justice, elections officials announced Wednesday.

Seventeen candidates ran in the race, including many who took issue with the way Frey has handled changes to the police department since one of its officers killed George Floyd last year. Frey, a Democrat, risked his political future and drew the ire of the city’s most liberal voices by opposing a ballot question asking voters to eliminate the police department.

Voters soundly defeated that ballot question on Tuesday but left Frey guessing until Wednesday about his own fate. Frey had 43% of the vote after the first count Tuesday night, which was more than double the support of his closest challengers but short of the more than 50% needed to win outright under the city’s ranked-choice voting system. 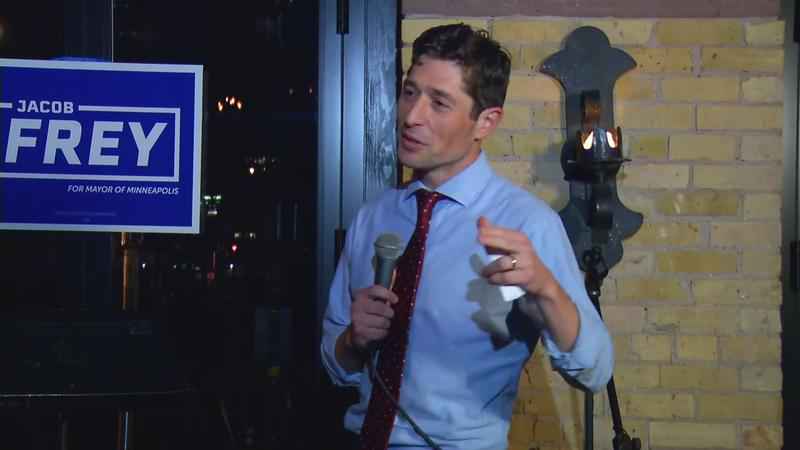 Frey was announced the winner after city officials allocated voters’ second- and third-place choices when their first choices were eliminated. The city said Frey won with 49.1%, or 70,669 votes, to runner-up Kate Knuth’s 38.2%, or 55,007 votes.

Only a handful of candidates were thought to be serious threats to Frey, with two — Knuth and Sheila Nezhad — teaming up on a strategy that urged voters to leave Frey off their ballots entirely. The pair had the backing of U.S. Rep. llhan Omar.

Frey, a Democrat in a liberal-dominated city, faced sharp pressure from competitors on his left flank. Seventeen candidates had entered the race for mayor, including many who took issue with the way Frey has handled changes to the police department since George Floyd was killed by a Minneapolis officer last year. Frey positioned himself as an opponent of an effort to eliminate the police department and of the most vocal liberals who were seeking a symbolic victory in Floyd’s city.

Voters soundly defeated the proposal to replace the department, with about 56% opposed. Two council members who backed elimination were ousted by challengers, and two others were in close races.

Knuth, 40, is a former state representative and environmental justice activist. Nezhad, 33, is a community organizer who worked as a policy analyst for one of the leading groups out to eliminate the police department. Both women also supported rent control, another proposal on Tuesday’s ballot, in contrast to Frey’s general opposition.

Under the ranked-choice system, candidates with no chance to win after the first round of counting are eliminated. A voter who backed such an unsuccessful candidate would then have his or her second choice tabulated, presuming that candidate remained in the race. The process is repeated until a candidate is declared the winner.

Frey late Tuesday called it “a really good night” but stopped short of claiming victory. By remaining in office, he stands to benefit from voters’ approval of another ballot question Tuesday — one that moves the city to a strong-mayor form of government. Critics have long said the city’s weak-mayor system sometimes meant confusion over who has clear authority over city departments and staff.

Frey was the face of Minneapolis during some of its darkest days, including Floyd’s May 2020 death and the rioting that marred ensuing protests and led to the burning of a police precinct after Frey ordered officers to abandon it. Floyd’s death sparked the most widespread unrest in the U.S. since the Rodney King riots.

During the worst of the Minneapolis unrest, conservatives accused Frey of failing to stem the riots and crack down on soaring crime and gun violence. Meanwhile, the left criticized him for not doing enough to overhaul the police department.

Frey, a lawyer by training and a Virginia transplant, first won a City Council seat in 2013. He ascended to the mayor’s office in 2017 by ousting incumbent Betsy Hodges in a race also roiled by police accountability issues, including the 2015 shooting of Jamar Clark, a Black man, in a struggle with white officers and the 2017 shooting of Justine Ruszczyk Damond, a white woman, by a Black officer.

The city announced Wednesday afternoon that in the second round of tabulation, no other candidate was able to reach the threshold. Frey wins with 49.1% of the vote.

The city uses a ranked-choice voting system and with all precincts reporting, incumbent Jacob Frey leads in first-choice votes at 43%.

However, because no candidate earned 50% of the votes, the city will start counting second- and third-choice votes later Wednesday.

Not only do experts say Frey has the clear lead, likely winning a second term, but also that the election could not have gone more in his favor, with all ballot questions going his way.

"If Frey wins, he will have more authority, he can directly appoint department heads, which is new for him. The council will be more sympathetic to his agenda. And the police department will remain, and that is very much what he wanted," political analyst Steven Schier said.

If he wins, Frey will have more oversight over the city’s agencies than he did before. That’s because voters decided they’d like a "strong mayor" system in Minneapolis.

Frey says it gives the city the chance to get serious about the work ahead, including police reform.

Election officials say they don’t know how long it will take to finish conducting the other rounds of vote counting Wednesday, but they will declare a winner in the mayor’s race as soon as possible.

Incumbent Jacob Frey has a commanding lead in the Minneapolis mayoral race with over 99% of precincts reporting, but he is still shy of the majority threshold needed to win in the city’s ranked-choice voting system.

The future of the Minneapolis Police Department has perhaps gotten the most attention leading up to Election Day 2021, but the city’s mayoral race features more than a dozen candidates.

Incumbent Mayor Jacob Frey is opposed to Question 2. His top opponents have been Sheila Nezhad and Kate Knuth, who both support the move to a Department of Public Safety.

The three are also split on Question 1, which asks residents about changing the structure of city government to a "strong mayor" setup, where the mayor would be in an executive role and the City Council would propose and pass policy.

The "strong mayor" system is how St. Paul operates, with proponents saying it’s too difficult for departments to report to 14 bosses with the City Council and mayor both in charge — with the exception of the police department, which already reports directly to the mayor.

Frey is in favor of the "strong mayor" system, while Nezhad and Knuth oppose it.

Using ranked-choice voting, the city may not know its next mayor until Wednesday.