"John Thompson did show up unannounced at our Western District offices…so he could apologize to the sergeant who pulled him over on July 4th," St. Paul Police spokesman Steve Linders told 5 EYEWITNESS NEWS.

The apology comes on the same day there’s new scrutiny of allegations of domestic abuse involving Thompson. 5 EYEWITNESS NEWS obtained evidence photos from a 2004 case at an Eagan apartment complex.

The incident report by Eagan Police back then portrays an argument that turned violent and life-threatening between Thompson and a woman, in the presence of three children.

"They argued and when they went back to the master bedroom, she told him if he touched her, she would call the police," the report says of Thompson and the victim. "She stated he jumped on her on the bed, put both his hands around her neck and started choking her and told her ‘I’ll choke you until you can’t breathe anymore’. (The victim) said she could not breathe, it hurt and she was scared. She said when she felt like she was going to pass out, he let go and they fell off the bed. She said she tried to get up and he slapped her. She said she told him if he hit her again, she’d call the police. He did hit her again and when she tried to grab the phone, he grabbed it and dismantled it so she could not use it." 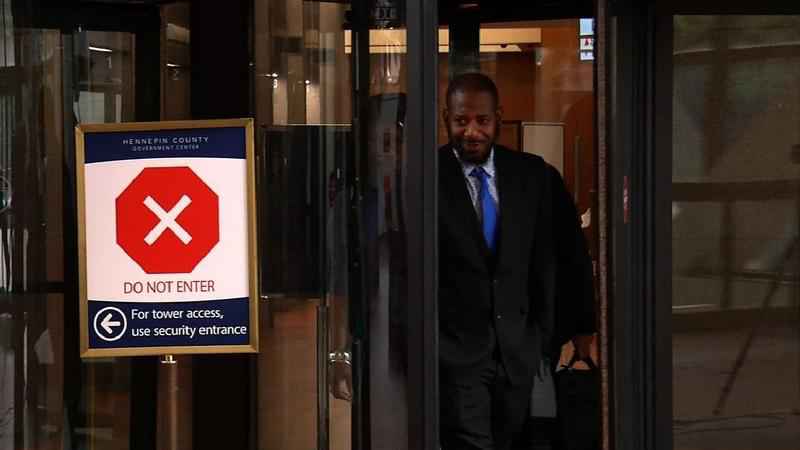 The photographic evidence compiled by police the night of Aug. 9, 2004, correlates with what the victim told police that night. The photos show abrasions and bruising on the neck and arms of the victim, a broken kitchen table, a broken phone and blinds that were pulled off a window as the victim says she was trying to escape.

"When she grabbed the phone, she said Thompson ran in and grabbed the cord and broke the cord in half," according to the report. "She said she ran to the window and tried to climb out the window, but Thompson grabbed her and pulled her back. She said she was hanging onto the blinds and the blinds ripped off the wall. She said (a child) was in the room and watched the assault occur. She said she ran into the master bedroom and tried to climb out the window, and the same thing happened. Thompson pulled her back and she ripped off the blinds from the master bedroom window. She said she ran towards the kitchen to get the kitchen phone. When she grabbed for the phone and dialed 911, Thompson started choking her again. Austin said she was unable to talk to the dispatcher because she could not breathe. She said she grabbed a small club and hit Thompson on the head to try to get him to let go."

There is also a police evidence photo showing a mark on Thompson’s forehead where she claims to have hit him in defense.

In the Eagan case, Thompson was initially charged with felony assault, gross misdemeanor interference with a 911 call and misdemeanor domestic assault. He eventually pleaded guilty to disorderly conduct, was sentenced to one year of probation and ordered to undergo anger management counseling.

On Wednesday, after Thompson was convicted of misdemeanor obstruction of legal process in Hennepin County Court, attorney Jordan Kushner again questioned the authenticity of the police reports of domestic abuse from 2003, 2004, 2009, 2010 and 2011 in several jurisdictions.

"In a court, police reports by themselves don’t mean anything," Kushner said. "You actually have to have the people involved testify. I’ve seen so many police reports that are wrong. The police get it wrong. Somebody makes something up."

He declined to comment on photos 5 EYEWITNESS NEWS sent him Thursday. Thompson said on Wednesday he still won’t answer questions about the domestic assault cases or calls for him to resign.

"Please, no questions," he told reporters. "I will answer questions at a later time. Just allow me time to spend with my wife. She’s been through a lot."