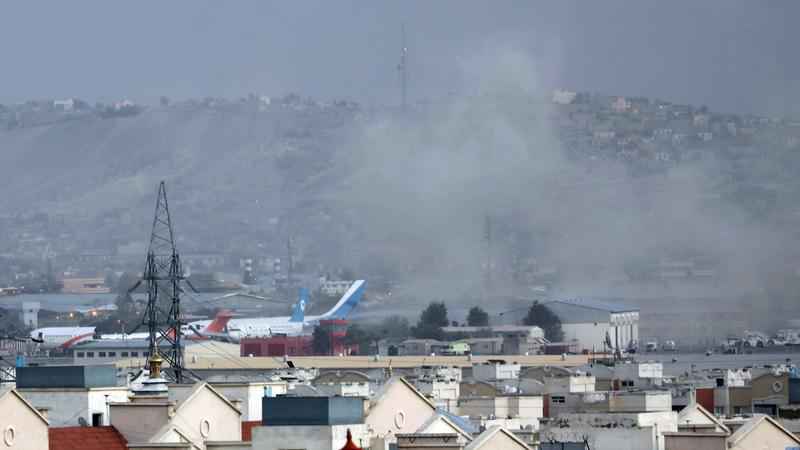 Smoke rises from a deadly explosion outside the airport in Kabul, Afghanistan, Thursday, Aug. 26, 2021. Two suicide bombers and gunmen have targeted crowds massing near the Kabul airport, in the waning days of a massive airlift that has drawn thousands of people seeking to flee the Taliban takeover of Afghanistan.[AP Photo/Wali Sabawoon]

The death toll in the attack at Kabul’s airport on Thursday has increased.

An Afghan official says at least 60 Afghans were killed and 143 wounded.

A U.S. official said the attack was believed to have been carried out by the Islamic State group.

President Joe Biden spoke directly to the attackers in a speech to the nation and said “We will not forgive. We will not forget. We will hunt you down and make you pay.”

President Joe Biden says the U.S. service members who were killed in attacks outside the airport in Kabul, Afghanistan, were “heroes.”

Addressing the nation from the White House, Biden says they were “engaged in a dangerous, selfless mission to save the lives of others.”

At least a dozen U.S. service members were killed in Thursday’s attacks, along with scores of Afghans.

The Islamic State affiliate in Afghanistan has claimed responsibility for the attacks.

President Joe Biden is set to speak following the deadly explosions outside the airport in Kabul that killed 12 U.S. service members and scores of Afghans.

Two suicide bombers and gunmen struck crowds of Afghans waiting in Kabul to flee life under the Taliban on departing flights. A U.S. operation airlifting American citizens and vulnerable Afghans to other countries is set to end Tuesday, a deadline set by Biden.

The Islamic State group’s affiliate in Afghanistan has claimed responsibility for the attack.

Biden has been under intense pressure to extend the evacuations beyond Tuesday, but repeatedly has cited the threat of attack for sticking to his deadline.

Two suicide bombers and gunmen have targeted crowds of Afghans flocking to Kabul’s airport, in the waning days of a massive airlift that has drawn thousands of people seeking to flee the Taliban takeover of Afghanistan. An Afghan official says at least 60 Afghans were killed and 143 wounded.

A U.S. official said the complex attack was believed to have been carried out by the Islamic State group. Pentagon spokesman John Kirby said the two blasts were near an airport entrance and a short distance away by a hotel.

Two United States officials say at least 12 U.S. service members were killed in the Afghanistan bombings, including 11 Marines and one Navy medic. Officials say a number of US military troops were wounded. They warn, however, that the numbers may grow.

A U.S. official says several Marines were killed and a number of other American military were wounded Thursday in an attack on Kabul’s airport.

U.S. officials have said that information is still coming in and they are trying to determine exact numbers of casualties.

The official spoke on condition of anonymity to discuss ongoing military operations. The Pentagon would not say what troops were involved but acknowledged that "a number of U.S. service members were killed."

A U.S. official says the complex attack outside Kabul airport is "definitely believed" to have been carried out by the Islamic State group.

The official says members of the U.S. military were wounded in Thursday’s attack, which involved two suicide bombers and gunmen. The official spoke on condition of anonymity to discuss ongoing operations.

The Islamic State group is more radical than the Taliban and has carried out a wave of attacks targeting civilians. The official says evacuation flights have continued to take off from Kabul airport in the waning days of an airlift to help people flee the Taliban takeover of Afghanistan.

Russia’s Foreign Ministry says a second explosion has gone off outside Kabul airport.

The twin suicide attacks killed at least 13 people and wounded another 15. U.S. officials said that American personnel were wounded in the blast, without elaborating. They spoke on condition of anonymity to discuss ongoing operations.

The blasts happened outside the airport, where thousands of Afghans have gathered hoping to join a U.S.-led airlift after the Taliban takeover.

We can confirm that the explosion at the Abbey Gate was the result of a complex attack that resulted in a number of US & civilian casualties. We can also confirm at least one other explosion at or near the Baron Hotel, a short distance from Abbey Gate. We will continue to update.

An explosion has gone off outside Kabul’s airport, where thousands of people have flocked as they try to flee the Taliban takeover of Afghanistan.

Officials offered no casualty count, but a witness said several people appeared to have been killed or wounded Thursday.

Western nations had warned earlier in the day of a possible attack at the airport in the waning days of a massive airlift.

Suspicion for any attack targeting the crowds would likely fall on the Islamic State group and not the Taliban, who have been deployed at the airport’s gates trying to control the mass of people.

The Pentagon confirmed the blast, with no immediate word on casualties.