Before jurors were called in for the morning, Judge Paul Magnuson said a request has been made for former Brooklyn Center police officer Kimberly Potter’s sentencing to take place on the afternoon of Feb. 18 instead of the morning, as scheduled. Earl Gray, the defense attorney for Potter, represents Thomas Lane. Magnuson said he hopes the federal trial can continue in the morning on Feb. 18 and then send the jury home early so Gray could attend Potter’s sentencing.

However, Magnuson would later say court won’t be in session on Feb. 18 but declined to explain why to the jury.

When the trial resumed Friday, jurors heard from Mendota Heights Police Chief Kelly McCarthy, who is also the chairperson of the Minnesota Board of Peace Officer Standards and Training (POST). She, like previous government witnesses, testified that officers have a duty to care for subjects in their custody.

“Once someone is in your custody … they are essentially your baby,” McCarthy said.

After McCarthy quickly wrapped up, prosecutors called Alyssa Funari, a bystander at the scene. She explained for jurors that she drove past the scene and got out of the car when she saw what was happening.

“I instantly knew he was in distress,” Funari said of Floyd. When asked by the defense if she knew what had happened prior to Floyd being on the ground, Funari replied that she didn’t but had “a gut feeling something wasn’t right.” 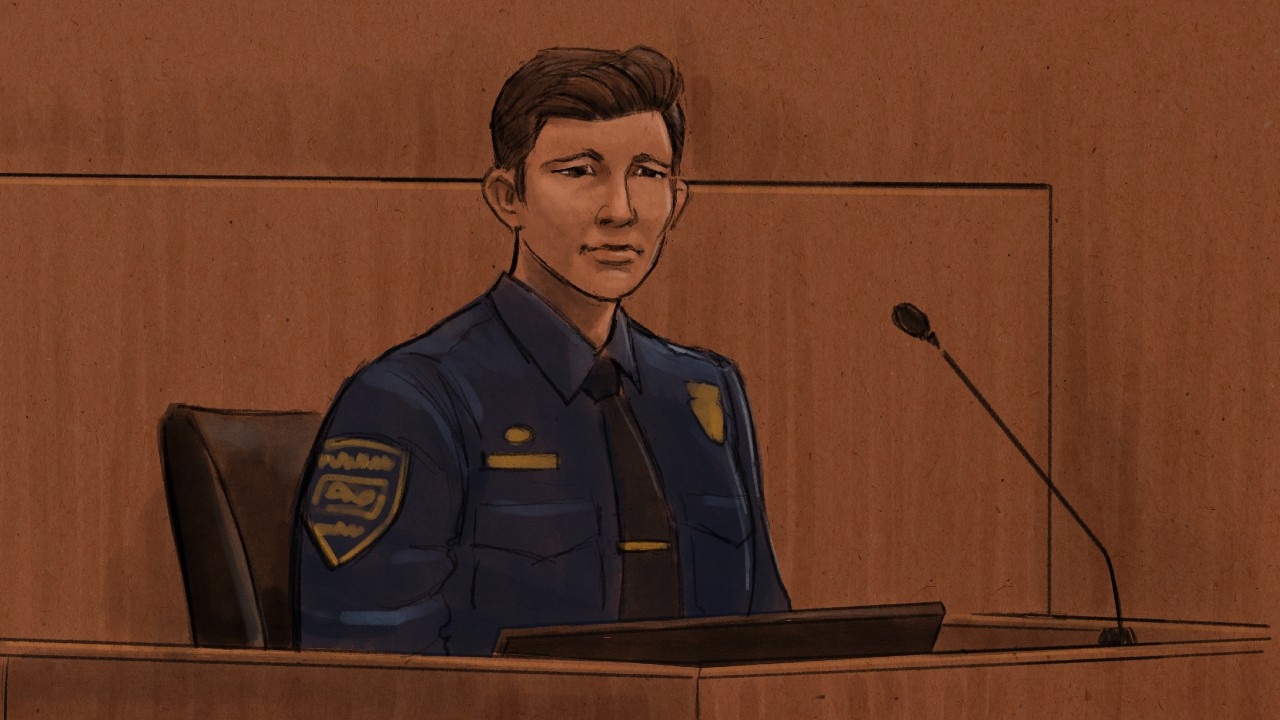 The third witness to testify Friday morning was FBI Special Agent Matt Vogel. He mainly discussed the basics of how body cameras work and how officials made transcripts for the videos. He also made a timeline of the events that day, showing when Floyd started getting restrained, when he became unconscious, when Kueng checked Floyd’s pulse and when the ambulance arrived and restraint ended.

As Vogel and prosecutors walked through that timeline, Vogel noted Thao at one point asked Floyd, “What do you want?” and Floyd responded, “I can’t breathe, knee on my neck.” He also noted, after Lane left the ambulance and the officers met with a sergeant, Kueng and Lane never mentioned any neck restraint, Floyd going unconscious or their inability to find a pulse. Chauvin and Thao were silent during that interaction.

Kueng’s attorney noted the test Kueng took at the police academy didn’t say “EMS,” “recovery” or “intervene” anywhere. Lane’s attorney pointed out that Lane did try to find Floyd’s pulse and then helped in the ambulance. Thao’s attorney argued about the transcript of the videos, saying different people can hear different things. He specifically asked at one point if Floyd said, “I ate too many drugs,” and Vogel responded, “it was unintelligible to me.”

Jurors were dismissed a little early Friday. The trial is set to continue Monday at 9:30 a.m. and it’s likely that the prosecution will rest its case at some point that day.

As proceedings resumed after the lunch break, Judge Magnuson announced they will not have court next Friday. He did not specify why but Feb. 18 is also the day of former Brooklyn Center Police Officer Kimberly Potter’s sentencing. Potter is represented by Earl Gray, who is also Thomas Lane’s attorney.

Court will, however, be held on Presidents’ Day.

Vogel confirmed that the former officers looked for a hobble device to restrain Floyd after they brought him to the ground. After EMS was called, however, Thao asked “do you still want to hobble him at this point then? … we’ll just hole him until EMS .. if we hobble him a sergeant’s going to have to come.”

The Special Agent testified that Floyd said “I can’t breathe” approximately 25 times while being restrained. Prosecutors asked Vogel to read various passages from body-worn camera transcripts, including Lane asking twice whether the officers should roll Floyd over. He confirmed Thao upgraded the EMS call.

He noted that after Floyd had been restrained on the ground for about three minutes, Thao asked him “What do you want” and Floyd responded, “I can’t breathe, knee on my neck.”

Vogel explained he noted that in the timeline because “it was a direct interaction” between Thao and Floyd.

He also noted that Charles McMillian, a bystander, eventually told officers to move from Floyd’s neck.

“I thought it was significant because up until that point he had been making comments that were encouraging Mr. Floyd to get up and get into the car […] in that moment there seems to be a change in what he was observing and that was his statement, that something was wrong in the interaction between the officer and Mr. Floyd.”

As Vogel read various parts of the body-worn camera transcript out loud for the jury, he testified that when Lane asked to roll Floyd to his side, both Chauvin and Kueng responded they should leave him the way he was.

He also noted, a few minutes later, when Thao said ‘hard to talk if you’re not breathing. Vogel said that was significant because “that was a moment where he acknowledged that the bystanders had been talking about Mr. Floyd not breathing properly and directly responded to it.”

Assistant U.S. Attorney LeeAnn Bell referred to comments Alyssa Funari made on the scene. She testified on Friday morning.

Bell specifically pointed to the part where Funari asked whether Floyd was “talking now” and said, “he’s about to pass out”.

Jurors then watched Thao’s body camera video from the point officers restrained Floyd onto the ground to the point where bystander Donald Williams asked for Thao’s badge number. Portions of Lane’s body camera were also played for the jury.

Vogel testified that before Floyd was unconscious, “… he was generally in line, parallel with the other three officers […] or standing behind them at certain points.” Defense attorneys have argued Thao’s back was to Floyd, Kueng, Lane and Chauvin.

As they walk through Vogel’s timeline, he confirms that Lane asked if they should roll Floyd over a second time and later, when Kueng checked, the ex-officers couldn’t find a pulse. According to Vogel, 1 min. 36 seconds passed before the ambulance arrived.

According to Vogel, “the officers generally continued to maintain their position .. with Officer Chauvin on the neck and back, Officer Kueng in the middle of Mr. Floyd’s back and Officer Lane at the feet but not necessarily holding them down.”

He detailed pleas from several concerned bystanders who urged the former officers to check for a pulse as he became unresponsive.

cell phone video of the interaction. She was the shift lead at the Speedway gas station across the street from Cup Foods.

Vogel confirmed Lane assisted with compressions in the ambulance and later returned to the scene. Bell showed the jury body-worn camera footage of his arrival back to 38th and Chicago after leaving the ambulance.

Vogel testified, however, that neither Kueng nor Lane mentioned the inability to find a pulse, Floyd becoming unconscious, or the use of a neck restraint.

He said, “The reports showed that they responded to basically a gamut of urban policing calls: violent crimes, property damage, they made arrests, they had medical calls, drug overdoses, and assaults […] no two calls were exactly the same.”

Kueng’s attorney Thomas Plunkett was the first to question Vogel, focusing on his client’s training. The defense attorney drew up an exam Kueng took at the Police Academy and searched for the words “EMS”, “intervene”, and “recovery”. Vogel confirmed those words did not appear in the search.

Later, during re-direct, Bell pointed out Kueng did correctly answer a question on the test about an officer’s duty to intervene.

Plunkett also argued Chauvin “actually makes the decisions” about where each officer would go following their conversation with Sgt. Pleoger.

Vogel countered, “I took it as more of a discussion…”

Defense attorney Earl Gray, representing Thomas Lane, took the same approach as with previous witnesses. He walked Vogel through the moments he argues Lane checked for a pulse.

While Vogel noted Lane’s hand did not go to the correct place for an ankle pulse check, he said, “ […] he may have attempted to.”

Gray also argued the ambulance pulled up within 10 seconds of that pulse check. Once paramedics arrived, he pointed out that Lane provided compressions in the ambulance.

“After the EMT directed him to do chest compressions […]” said Vogel.

Thao’s attorney Robert Paule was the last to cross-examine Vogel. He pointed out Vogel is a federal investigator.

Paule argued defense attorneys might disagree with the moments Vogel noted as significant on his timeline. He also questioned the transcripts by raising the possibility that two people could hear entirely different things while listening to the same audio.

As an example, Paule played a portion of body camera footage and asked Vogel if he heard Floyd say, “I ate too many drugs.” Vogel responded, “[…] it was unintelligible to me.”

The head of the Minneapolis Police Department’s homicide unit testified Thursday that the officers should have intervened to stop fellow Officer Derek Chauvin when he had his knee on the Black man’s neck.

Lt. Richard Zimmerman added that the duty can mean intervening to begin first aid or even moving an officer out of the way if necessary.

J. Alexander Kueng, Thomas Lane and Tou Thao are accused of depriving Floyd of his civil rights by failing to give him medical aid while he was handcuffed, facedown with Chauvin’s knee pressed onto his neck.

Kueng and Thao are also accused of failing to intervene to stop the killing.

Stay with 5 EYEWITNESS NEWS and KSTP.com for trial updates throughout the day.