The taps were flowing, and beer lovers returning.

“Yeah, I’m really happy,” says Annie McFarland, of Minneapolis. “I think it’s really exciting, especially after this past year. It’s been tough for everybody.”

After a seven-month pandemic shutdown, Surly Brewing Co. reopened Saturday with a reduced staff — and beer, sandwiches and hope on the menu.

"The excitement, the energy amongst the staff is contagious,” said Dan DiNovis, Surly’s vice president of hospitality operations. “The number one question everybody asks is, ‘When is the tap room reopening?’ There’s just so many people that want to come back and just enjoy what we have." 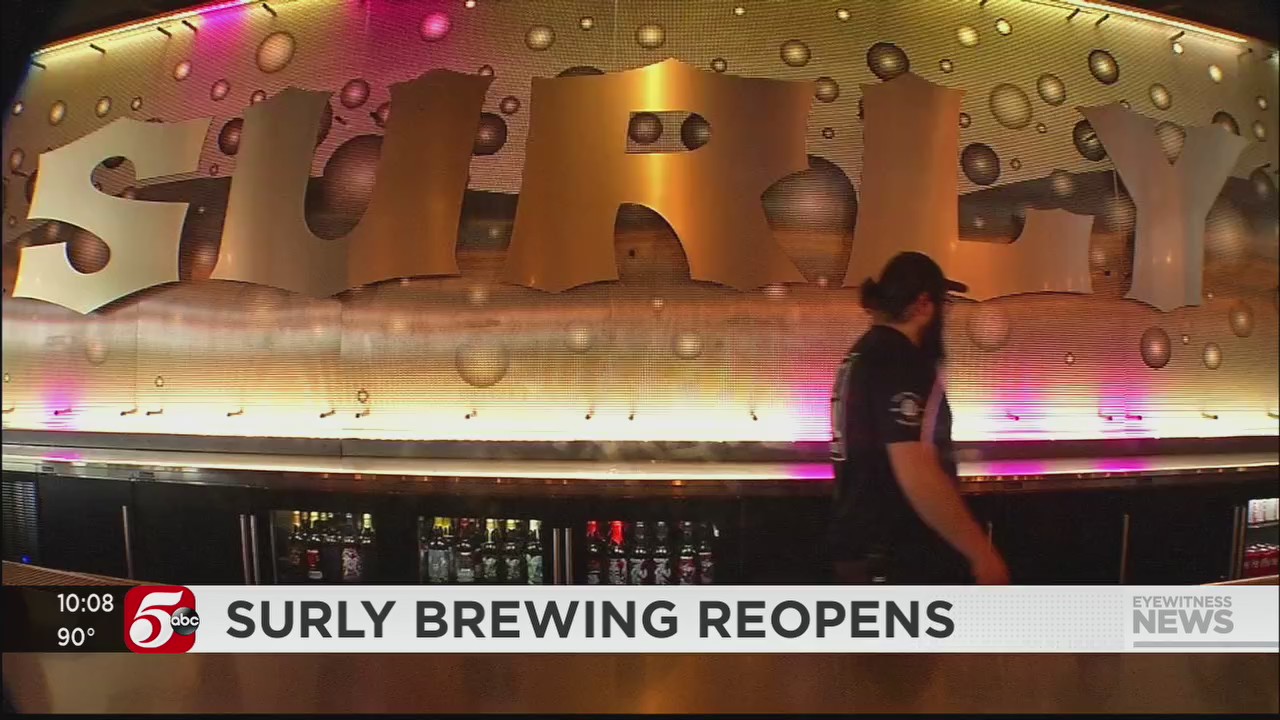 Surly beer hall reopens after closing shop for the winter

The pandemic has had a huge impact on the state’s hospitality industry. Restaurants and bars were closed, and an estimated 116,000 jobs were lost, according to Hospitality Minnesota.

Surly and its employees were confronting that hard reality, too.

“So in March we had to wind things down, and we pretty much came to a crashing halt,” DiNovis recalls. “We pretty much had to lay off our entire staff.”

The only exceptions, he says, were a handful of managers.

Months later, just 30 employees are working at Surly. Managers are planning to have 75 employees in place by July, and they hope to get staffing levels back up to their original 200 at some point.

The road to this reopening hasn’t been easy.

After Surly closed as a hospitality venue last November, staffers were working around the clock brewing beer. Sales of packaged and canned beer went up, DiNovis says, but draft sales dried up because restaurants and bars were closed.

He says by March, that small group of managers was trying to keep things going with meal kits and delivery service.

“We were just like everybody else, pivoting and changing every day,” DiNovis said. “Every day was walking into new restrictions changes and a lot of fear. We were all scared.”

Last fall, a number of Surly employees wanted to unionize. The election failed by a single vote, but the majority of employees who did vote were in favor of unionization. At the time, organizers also said many employees didn’t vote, and a majority wasn’t reached.

Now, months later, Surly’s owners have implemented an 18% service charge for customers instead.

“That service charge allows us to take that money that comes in, and spread it out to the entire staff,” DiNovis says. “So basically, all our front line workers and kitchen staff are making on the same level."

After 60 days at work, employees can get health, dental and 401(k) coverage.

DiNovis says the plan is to build out a full-time staff with benefits.

“If it’s a part-time job, you’re fighting for tips,” he said. “We want to make it easier for people to come here, and not have to worry that you’re going to have a dependable amount of income.”

Woods says the benefits take a big financial burden off her mind.

“Just the type of freedom and like the calm with that, knowing these resources are an option for you and other people as well,” she said. “Adds a level of peace and contentment for sure.”

DiNovis says employees are being trained to work in all areas at the brewery, from food prep to behind the bar to the retail store. Previously, different sections of the business were operated as separate entities.

“If you’re a retail employee, and there was only two shifts available, you’d never have the opportunity to have full-time status,” DiNovis explains. “Now a lot of our staff are cross-trained, so we have these flex positions.”

As far as pandemic precautions are concerned, masks are not required inside, Surly says, although employees have the option to wear them if they want.

Meanwhile, customers like McFarland says it’s just nice to have a beer with friends: a sign of summer.

“I think there was a sense of community kind of coming back to,” she says. “I think it was really isolating this past year and just being back with everybody and having that sense of community, I think that’s a really great feeling.”