Aundrea Wiley says a call from her mother woke her up in the middle of the night. Wiley’s younger sister had been shot in downtown St. Paul.

“The detective was waiting outside of Regions [Hospital] and told us… she didn’t make it,” Wiley said. “I wouldn’t wish that on anybody.”

Marquisha Wiley, 27, was killed in a shootout that injured 14 others inside the Truck Park bar on Oct. 10. Police arrested two men within hours, but Wiley’s family later learned that the suspected shooters were not the only ones connected to the mass shooting.

Horton is accused of buying that handgun and 32 others in a series of straw purchases in just four months — using his clean record to buy guns on behalf of others who would have been prohibited from having firearms, according to court records. 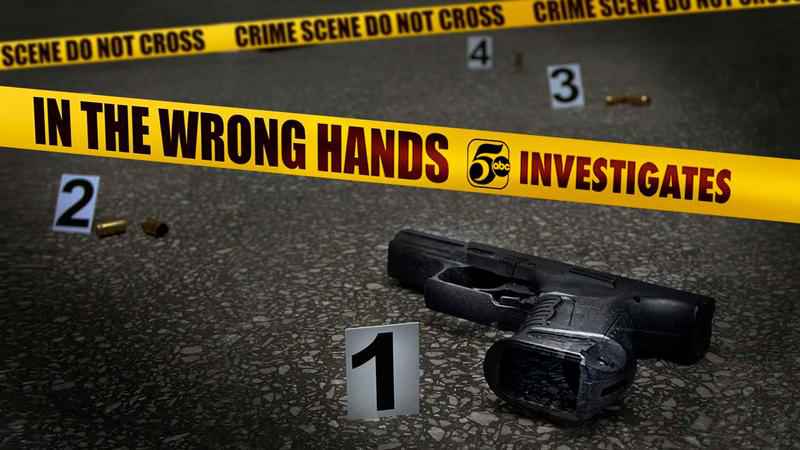 It’s part of an “uptick” in straw purchasing that is contributing to the surge of violence across the Twin Cities, according to the Bureau of Alcohol, Tobacco, Firearms, and Explosives (ATF).

Horton has denied buying firearms for anyone else.

A 5 INVESTIGATES review of court records in his case, as well as several other cases, shows numerous firearms found at recent crime scenes have been linked back to suspected straw purchases.

“That makes me angry,” Aundrea Wiley said. “And it scares me that (Horton) is not the only one out there. There’s a lot of people doing what he’s doing.”

The court records, as well as interviews with federal agents and local gun shop owners, reveal how a few individuals can put dozens of firearms in the wrong hands in just a matter of months, weeks, and even days.

Including Horton, 5 INVESTIGATES analyzed a total of six cases involving people charged with the same crime and found they were suspected of purchasing a total of 118 guns.

Agents say Sarah Elwood bought 47 guns in the month of May 2021 alone. At least three of the guns were recovered by police investigating crimes, according to the federal complaint.

After her arrest, agents say Elwood admitted to buying the guns and selling them for a profit. “Usually about $100 per firearm.”

Investigators say Tess Fair illegally purchased 14 guns between March and July of this year, including at least one for a gang member in Minneapolis.

“Two of the guns she purchased have been recovered at crime scenes in the Twin Cities area where one or more victims were shot,” prosecutors wrote in their complaint filed in July.

Attorneys for Elwood and Fair have not responded to requests for comment.

Jon Ortiz, assistant special agent in charge for the ATF’s St. Paul division, says his agency has seen an “uptick” in straw purchasing.

While it’s difficult to determine how much the increase is driving the spike in violent crime, the ATF says it’s making such investigations a top priority. The agency has an ongoing campaign called “Don’t Lie for the Other Guy” to warn possible straw purchasers that they could be committing a felony punishable by up to ten years in prison.

Ortiz cannot comment on open cases such as Horton, Elwood, and Fair, but the ATF agreed to share evidence from what it calls a classic case of straw purchasing that shows how guns bought by one person end up at crime scenes involving someone else.

Investigators say they began taking a closer look at the guns connected to an accused gang member, Fausi Mohamed, in 2015.

“We started seeing a pattern of firearms that were recovered and purchased by the same person. That’s when we started leaning forward,” Ortiz said.

When ATF agents initially questioned Ikar, she said at least one of the guns was stolen, but later admitted to buying them on behalf of her husband.

“We got lucky because every firearm that she ended up buying ended up going into his hands and ended up getting recovered for the most part,” Ortiz said. “If you look at every time he was arrested in possession of a firearm, it got progressively worse.”

Soon after Mohamed shot someone in Burnsville in June 2015, agents discovered his wife had bought the gun 18 days earlier from Bill’s Gun Shop in Robbinsdale.

Agents said security video from the store showed the couple entering together, but Mohamed dropped back when it was time to complete the purchase.

“Now that we look at the video, we can tell exactly what’s going on,” Ortiz said.

Bill’s Gun Shop was not accused of any wrongdoing in the Ikar case and store owner John Monson points out it’s not illegal for a wife to buy her husband a gun.

He added that while some straw purchases may appear to be obvious in retrospect, differentiating a lawful transaction from a straw purchase can be difficult.

“We see that type of behavior all the time and not all of them are straw purchases,” Monson said.

He says stores track multiple purchases made by the same person in a short period of time and those records can later help agents make a straw purchasing case.

“It’s an ongoing problem we fight. We’re watching for it every day,” Monson said.

Monson says his stores have not seen an increase in suspected straw purchases, but other licensed gun dealers, including Kory Krause, say the number of attempted purchases flagged by his employees has gone up.

“In the last year and a half, it has increased significantly,” said Krause, who owns Frontiersman Sports in St. Louis Park.

He recently posted additional signs warning customers that it is illegal to buy a gun on behalf of someone else who is prohibited.

“We’ve had to refuse service or ask people to leave. It was at a point where it was multiple times a day for a while,” Krause said.

Frontiersman was the last place where Horton Jr. bought guns, according to a federal complaint. Prosecutors say he continued to make purchases after the mass shooting in St. Paul until store workers got suspicious and turned him away.

“They’re our first line of defense,” Ortiz said about licensed gun sellers. “You don’t want to deprive somebody of their right to possess or purchase a firearm, so it’s a hard job for them.”

Aundrea Wiley and her family say they want more accountability from everyone and she is now determined to be a voice for her sister.

“If somebody can just hear what I have to say and realize the pain that these people are bringing to families, maybe someone will think twice before they buy somebody else a gun,” Wiley said. “I don’t want anyone else to go through this.”