Damage from overnight storms was reported in parts of Minnesota and Wisconsin Wednesday.

According to Hubbard Broadcasting affiliate KAAL-TV, early reports from the National Weather Service (NWS) in La Crosse, Wisconsin, indicated two people were hurt in Mower County during the storms. Area law enforcement said they received a call for two people who were trapped in their basement.

According to the Mower County Sheriff’s Office, the two were eventually rescued and taken to Mayo Clinic with injuries not considered to be life-threatening.

In Taopi, a house reportedly slid off its foundation, roofs were off houses, grain bins were destroyed and power lines were down.

The NWS says there was a “damage track several miles long” through the western side of the town. NWS officials reported early Wednesday morning there was a “high likelihood of a tornado,” however, the La Crosse NWS stated shortly before noon the damage found damage equal to EF-2 wind speeds.

“I come out and I just couldn’t believe it,” Scott Hatley said. 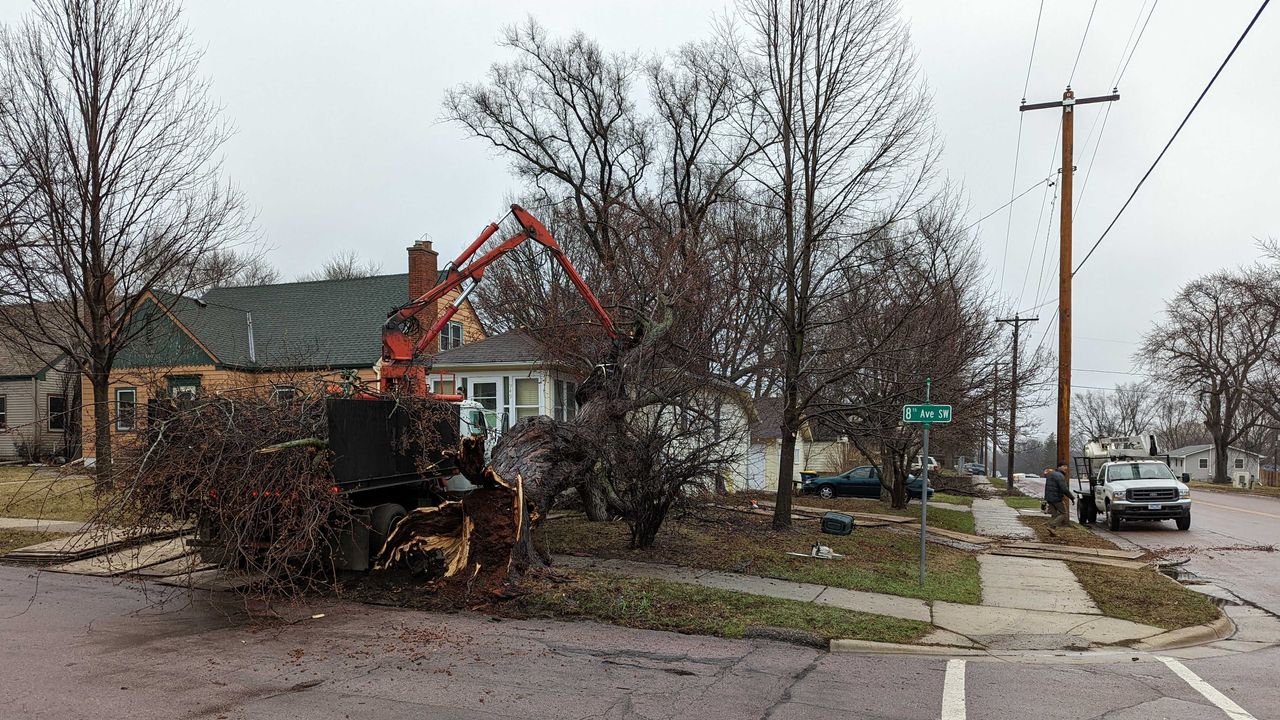 Hatley said he rode out the storm at his home, only to come out later and find it destroyed.

“It just sounded like a freight train coming through … glass shattering, this is the result,” he added.

Family, friends and strangers came out to help his family search for anything they could save.

“It feels like a nightmare we haven’t woken up from,” said Jane Boe, a family member who came to help.

“Yes, this is devastating and terrible, we talked about — thank you, God, that everyone is OK — in the end, that’s what matters,” Boe said.

She made sure to bring lunch — which was donated by staff at Sacred Heart Catholic School in nearby Adams — for the volunteers.

“When a disaster happens, you get it done, cleaned up, so your lives get back to normal, if there’s such thing,” said Dennis Lewison, one of the volunteers.

As the cleanup continued on a cold day Wednesday, the Hatleys’ spirit was warmed by the community support.

The Mower County Sheriff’s Office reported the affected areas in Taopi were searched and evacuated as needed. Sheltering was supplied to three families and others sheltered with family and/or friends.

NWS crews were in southeastern Minnesota and northern Iowa Wednesday to survey the damage.

“I would say it was a tornado, when I was downstairs in my basement, I could see it over here, and it worked its way along here, and just went straight through that valley,” one Taopi resident said.

In Faribault, there wasn’t widespread damage, instead, small pockets of snapped trees and tipped power poles.

There were obvious signs of wind damage, such as a split tree that fell and crashed a Mazda. Trees could also be spotted on houses, broken limbs, and shingles missing from a few homes.

Storm cleanup will be done over the next few days.

Meanwhile, KSTP meteorologist Matt Serwe reported the storms he was tracking were primarily to the south, with the metro seeing some isolated storms.

The NWS office in Chanhassen reported seeing pea-sized hail at its location around 10 p.m. Tuesday.

Serwe reports that, after the storms, lingering rain showers are possible through Wednesday morning. Strong winds remain likely on Thursday, with west winds gusting around 50 mph at times. Highs fall into the upper 30s, and light snow is possible from the Twin Cities to the north Thursday afternoon and evening. A dusting is possible in the metro. Highs are expected to stay in the 30s on Friday and hold in the low 40s through the weekend.