A 75-year-old man died Tuesday afternoon following a police pursuit of a truck that was entangled in a chainlink fence.

The Brooklyn Park Police Department said officers were called to the area of Highway 610 and Zane Avenue just before 10 a.m. after a citizen saw their construction trailer being stolen by a blue Ford truck.

Responding officers found the stolen trailer and truck in the parking lot of a Hy-Vee on Zane Avenue. When officers tried to stop the truck, it fled. Officers didn’t pursue it for safety reasons.

However, police say the driver then drove through the grass, into a ditch and through a chainlink fence to escape onto Highway 610, and the 200-plus feet of the fence became entangled in the truck. As the suspect fled onto south Highway 252, the fence was dragging behind the truck. Due to the dangers that posed, officers initiated a pursuit.

Near Highway 252 and 66th Avenue, the suspect truck passed another vehicle, which was struck by the fence. The impact caused the other vehicle to strike a traffic pole and also dislodged the fence from the fleeing truck. 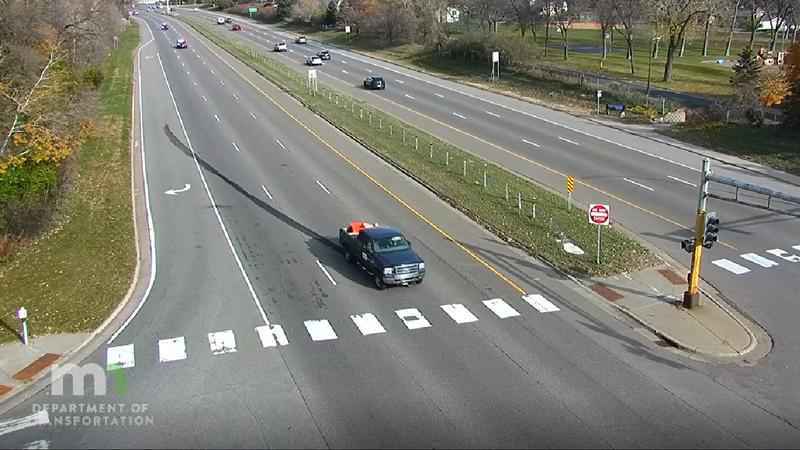 Officers stopped to render aid to the driver of the vehicle that was impacted by the fence. However, police say the 75-year-old man died from his injuries.

The suspect truck was last seen on Highway 100, exiting onto France Avenue. It’s described as a blue 2007 Ford F-250 with the Minnesota license plate number MJW169. It was also reported stolen.

The Minnesota State Patrol and Bureau of Criminal Apprehension are investigating the incident.

Anyone with information regarding the suspect truck’s location is asked to call 911.