A search warrant signed by a McLeod County judge in the midst of an ongoing standoff Monday reveals more about the raid that resulted in two deputies being shot.

The application for a no-knock nighttime warrant states McLeod County deputies Angela Malz and Darrell Caturia were serving an arrest warrant Monday morning at a home in Winsted — a community about an hour west of the Twin Cities — but the homeowner wouldn’t open the door.

The injured deputies were identified only by their last names in the search warrant application, but their first names appeared in a search of online records from the Minnesota Board of Peace Officer Standards and Training.

McLeod County Detective Matt Rolf, who applied for the warrant, stated Malz and Caturia breached the home at 11:40 a.m. A minute later, Caturia radioed that he had possibly been shot. The male suspect then barricaded himself in a bedroom.

Backup officers arrived at 11:53 a.m., and Malz and Caturia were taken to a hospital in Waconia because they had both been shot in the waist. 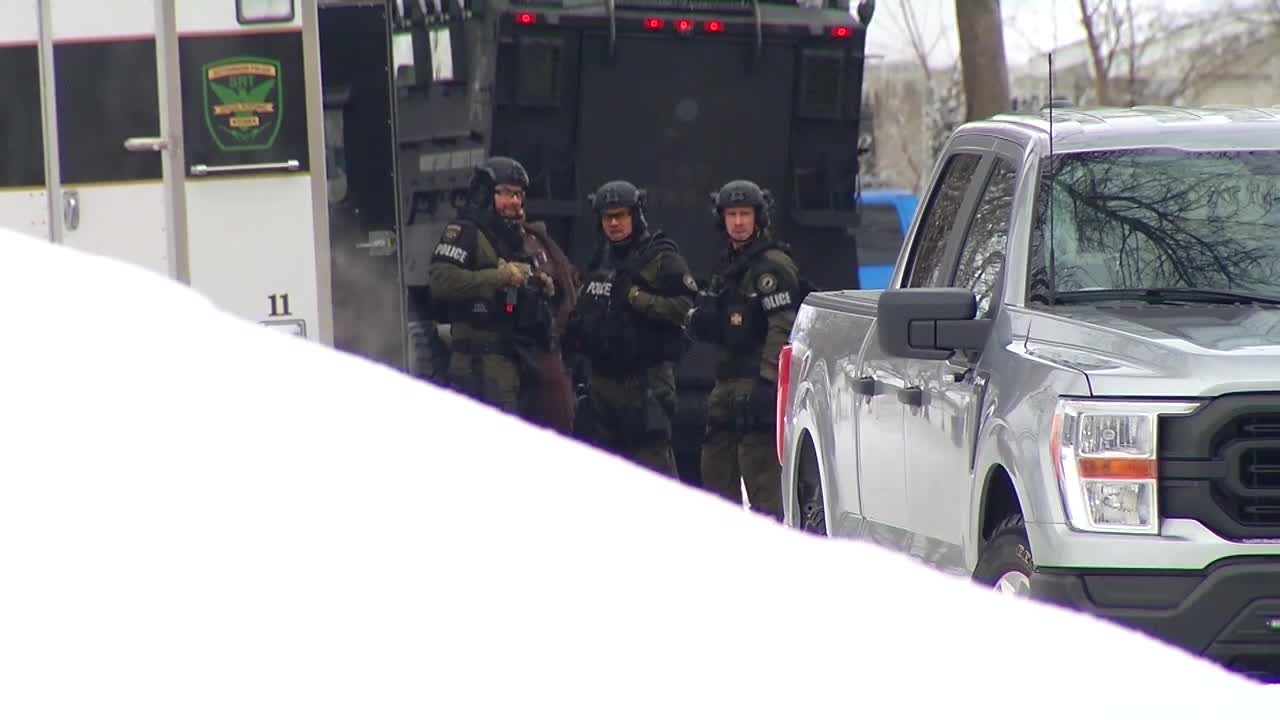 Law enforcement officers wear body armor outside a home in Winsted, Minnesota, where a suspect who had shot two McLeod County deputies had barricaded himself inside on Monday, Jan. 23, 2023. (KSTP)

The suspect, who was wanted on suspicion of felony child pornography charges, was not responding to crisis negotiators but had communicated to his daughter that “he was not going to go to jail,” the warrant application states.

Rolf had requested a no-knock nighttime search warrant because the suspect firing his gun made it “not safe for [the suspect], or law enforcement, to be required to knock and announce prior to making entry to this property” and because law enforcement anticipated the situation extending past 8 p.m., the cutoff for daytime warrants.

The sheriff’s office said the situation concluded when deputies sent a drone inside the house and saw a man’s dead body inside. The deceased man’s name has not been released to the public.

The Minnesota Bureau of Criminal Apprehension is leading the death investigation.

Another member of law enforcement was shot within 36 hours. At about 9:30 p.m. on Tuesday, a White Bear Lake officer was shot three times in the abdomen as officers tried to arrest 33-year-old Daniel Holmgren for a felony domestic assault warrant.

The veteran officer was quickly rushed from the apartment on Karth Rd. to the hospital where he is in stable condition.

“This is an alarming trend,” said Jeff Potts, the executive director of the Minnesota Chiefs of Police Association. “There’s inherent dangers to being a police officer, we know that and people who enter law enforcement understand that, but what’s really troubling is we’re seeing that level of violence, violent encounters increase in Minnesota and across the country.”

The latest uniform crime report from the Minnesota Bureau of Criminal Apprehension released in August shows peace officers were assaulted in 900 incidents in 2021, which was a 35 percent increase over 2020.

“I think there are some complexities as to why we’re seeing violent crimes increase, not just crimes that involve attacks or interactions with law enforcement but […] in Minnesota we saw historic increases in violent crime in 2022,” said Potts, who advocates for additional mental health supports for law enforcement. “There is definitely going to be mental health trauma that comes with that.”