Reporter’s Notebook: Inside the courtroom in the Derek Chauvin trial

Day 10 of jury selection in the trial of Derek Chauvin, who is charged with the death of George Floyd, came with some key rulings. 5 EYEWITNESS NEWS reporter Kirsten Swanson was one of the pool reporters on Friday. This is what she saw and heard during the court proceedings.

The sun was barely up over the horizon as I sprinted down the street toward the Hennepin County Government Center. The downtown Minneapolis building and plaza are surrounded in concrete barricades and barbed wire.

Just after 7 a.m., the guards waved me through the fencing and pointed me toward the building entrance. I instantly regretted wearing my favorite brown boots as they set off the metal detector, but the guards let me through and I made it inside with plenty of time.

This is a building I’ve been inside of more times than I can count. Normally, it’s one of the busiest places in downtown Minneapolis. People come for court appearances but also to pay their property tax or to do other business with the county. It’s common to see people sitting on the ledge of the water fountain that stretches the length of the skyway level of the building. 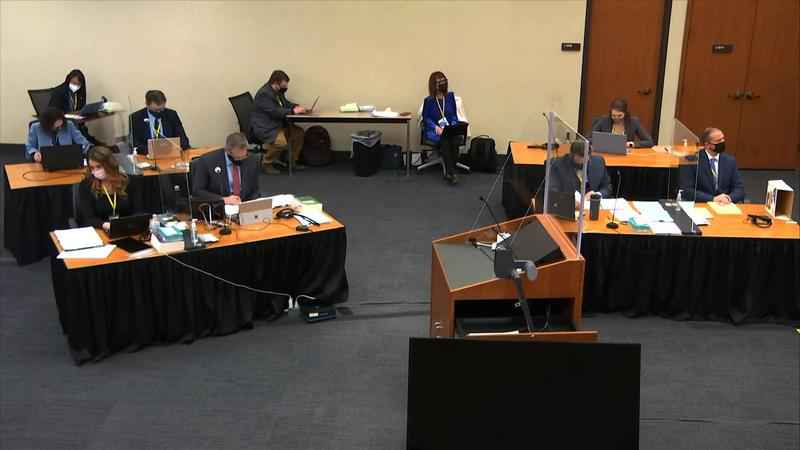 But today was different. There was no one. Only the hum of the escalators and the periodic beep of metal detectors.

When I reached the 18th floor, the deputies gave me a badge on a yellow lanyard, the designation that you belong on the floor. I looked out the wall of windows that open up to face the opposite tower. The offices are dark. That’s partly a symptom of the pandemic, but also in large part due to the trial, as the government center wanted county and court employees to work from home during the trial.

Courtroom 1856 is completely deconstructed. The only thing in its normal place is the seat where the judge sits. The witness stand is to his right, surrounded on three sides by plexiglass. Jury seats are scattered, socially distanced on one side of the courtroom. On the other side are tables where the prosecution and defense sit.

Derek Chauvin arrived with his attorneys Eric Nelson and Amy Voss just after 8 a.m. Chauvin walked into the courtroom standing tall. He placed a black briefcase underneath the table and pulled out a yellow legal pad and pen. He spent a few minutes arranging items on the table in front of him, including the audio device used during sidebar meetings.

Judge Peter Cahill entered the courtroom minutes later and immediately jumped into the business of the day. I’ve been in Cahill’s courtroom before covering other cases. What viewers have seen during jury selection is how he runs his courtroom on a regular basis. He is stern but patient and polite with a good sense of humor. He even chuckled during the defense questioning of one juror when the young man mentioned that he had tattoos all over his body.

What you don’t see on the livestream are all the little moments and interactions between everyone in the courtroom. During the first sidebar in the morning, Cahill’s clerk had to round up an audio device for him to use. Prosecutor Steve Schleicher leaned over to defense attorney Eric Nelson and told him he could turn up the volume by using a button on the side of the device. Nelson was pleasantly surprised to learn this on Day 10 of jury selection. The pair shared a smile and a laugh.

Being able to see the jurors is the biggest difference. Their body language can tell the attorneys a lot about how they are feeling when they are answering questions. This is an emotional process. What you can’t hear in their voices you see on their faces, even at times when a mask is covering half of it.