Don’t mess with the Red Bulls. Combatants have been learning that about the 34th Infantry of the Minnesota Army National Guard since World War I. Now they’ve won another battle.

A fundraising campaign last November was a huge success, raising more than $17,500 for a memorial to the storied military unit to be built at Fort Snelling National Cemetery. In fact, they surpassed their original goal of $10,000 by so much they now plan to also put a memorial at Camp Ripley near Little Falls.

Lieder has been exchanging emails with GoFundMe and its payment processing partner, PayPal Giving Fund, since last week. GoFundMe and PayPal initially told Lieder they would not be able to collect their funds because the 34th Infantry Division Association, the unit’s official nonprofit organization, didn’t have the proper tax code designation. They’re a 501(c)(19) under the federal tax code and need to be a 501(c)(3), according to GoFundMe and PayPal.

Lieder says he was not informed of that when he registered his fundraiser with GoFundMe. “GoFundMe accepted them as a charity, and once I saw that it was accepted in my account, that’s when I started the fundraiser,” he told 5 EYEWITNESS NEWS. 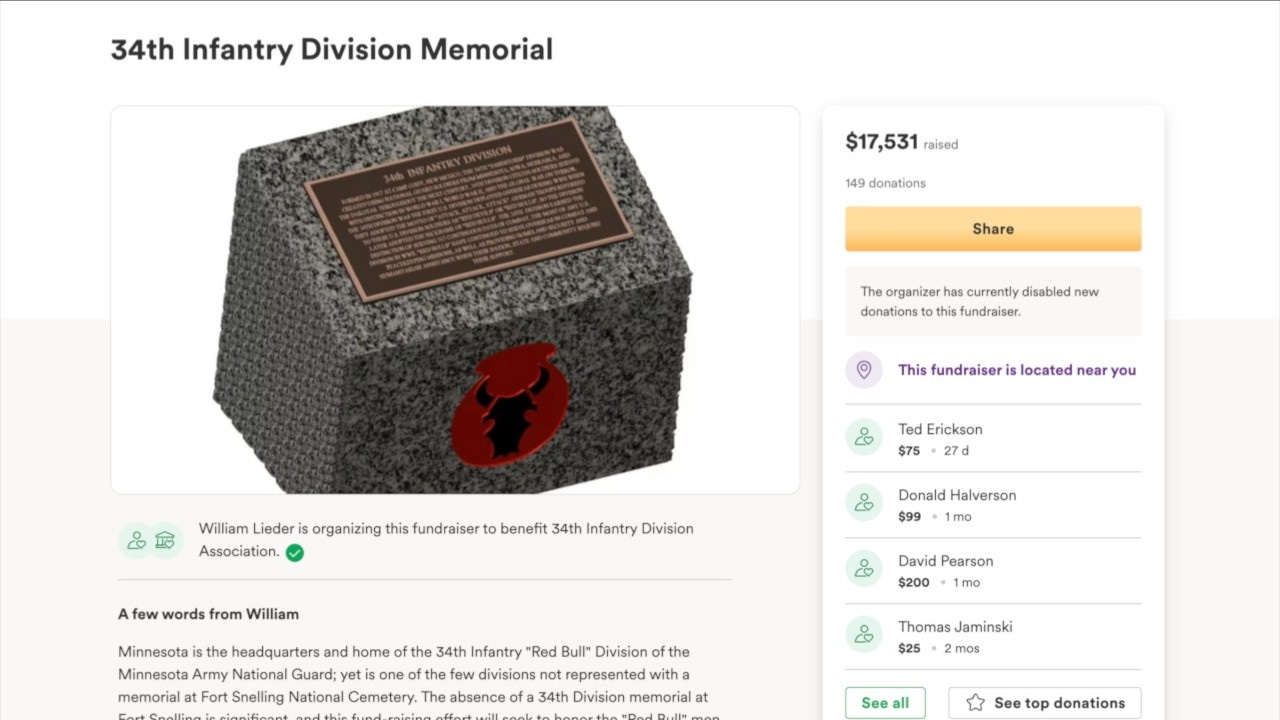 Eventually, Lieder was told by GoFundMe that if he could find another 501(c)(3) organization willing to accept the funds on the Red Bulls’ behalf, they could get their money that way.

However, when he found another veterans group willing to accept the money as a 501(c)(3) nonprofit, PayPal Giving Fund told them that is against their policy and said the 34th Infantry funds could be refunded to donors or given to other charities.

Finally, after inquiries with GoFundMe by 5 EYEWITNESS NEWS this week, PayPal sent an email to Lieder saying the company will release their funds.

“After further discussion with PayPal Giving Fund, they confirmed that they will be able to redirect the funds you’ve raised to the new 501(c)(3) of your choosing,” the e-mail says. “We understand that this circumstance has been inconvenient for you, and we hope this determination can bring you some peace of mind.”

“Our Trust & Safety team is continuing to work with the fundraiser organizer, William Lieder, and our payment processors to ensure the funds raised are delivered quickly and safely to support the memorial efforts of the 34th Infantry Division Association, as indicated in the fundraiser description. When funds are raised on GoFundMe, what’s most important to us is that organizers’ and donors’ intentions are honored. In this instance, donors will be informed of a change in the benefiting charity, as identified by the fundraiser organizer.”

Lieder says he’s hopeful this will clear up the matter but added, “I’ll believe it when I see it.”

If all goes as planned, the 34th Infantry Division veterans hope to dedicate a memorial at Fort Snelling National Cemetery in August to coincide with the 105th anniversary of the founding of the division.