Prosecutors say Potter ‘betrayed her badge,’ defense says ‘she made a mistake’ 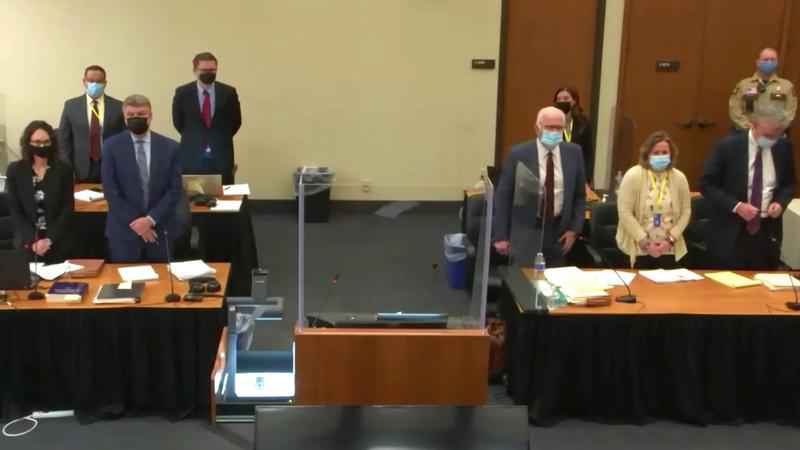 In this screen grab from video, the prosecution, left, and the defense, right, rise as the jury enters the court as Hennepin County Judge Regina Chu presides over court Wednesday, Dec. 8, 2021, in the trial of former Brooklyn Center police Officer Kim Potter in the April 11, 2021, death of Daunte Wright, at the Hennepin County Courthouse in Minneapolis, Minn.[Court TV, via AP, Pool]

The jurors hearing the trial of former Brooklyn Center police officer Kimberly Potter got their first taste of what they’ll see and hear over the coming days when opening statements were made Wednesday.

Potter, 49, is charged with first- and second-degree manslaughter in the case.

Eldridge emphasized all of the extensive training Potter had been through and the policies the Brooklyn Center Police Department has to ensure something like this doesn’t happen but said Potter didn’t follow those pieces of training or policies during Wright’s traffic stop.

The state also told the jury the case isn’t about Wright or whether Potter intended to kill him, saying it’s about Potter recklessly and negligently shooting Wright.

After a 20-minute break, the defense laid out its case to the jury, saying Potter was following her training to save a fellow officer and simply grabbed her gun instead of the Taser.

"She said, ‘I’ll tase you, I’ll tase you.’ The language was direct, it was clear, it was unmistakable, and all Mr. Wright had to do was stop," defense attorney Paul Engh said to begin his opening statement.

He highlighted the fact that Potter’s partner, Sgt. Michael Johnson, was hanging onto Wright’s car as the situation unfolded on April 11 and Potter knew he could be seriously injured or killed if Wright drove away.

"So when she says, ‘Taser, Taser, Taser,’ and one last pause, the facts will show you Mr. Wright can stop, all he has to do is stop and he’d be with us, but he goes," Engh said.

"She made a mistake. This was an accident. She’s a human being but she had to do what she had to do to prevent a death to a fellow officer, too," Engh said.

While explaining who the defense will call to testify, Engh told the jurors they’ll hear that Potter was following her training and trying to save her partner and that she believed she was firing her Taser. He also explained how Wright was pulled over and why officers were arresting him, saying it’s more than just the air freshener and tabs and instead about a potentially violent person who may have had a gun and was possibly under the influence of marijuana.

With opening statements finished, the state is expected to start making its case at 1:30 p.m.

Click here to see more about the jurors who are hearing this case.