Police issued a warning for residents in Woodbury and Oakdale, following a string of armed carjackings and robberies Monday night.

All four incidents happened outside popular businesses between 8:15 and 9 p.m.

"This makes you really nervous about coming out and shopping," said Joyce Hurley, who lives in Woodbury. "It’s very frightening because this always seemed like such a safe area for us."

The Woodbury Police Department confirmed an armed carjacking in the Target parking lot at 7200 Valley Creek Plaza, an armed robbery outside Chick-Fil-A at 6939 Valley Creek Road and a stolen car outside the Holiday Stationstore at 2030 Eagle Creek Lane.

Police believe those three crimes are connected, with the same suspect vehicles involved. They said the suspects arrived in a gray 2014 Honda Pilot and newer black BMW X1. 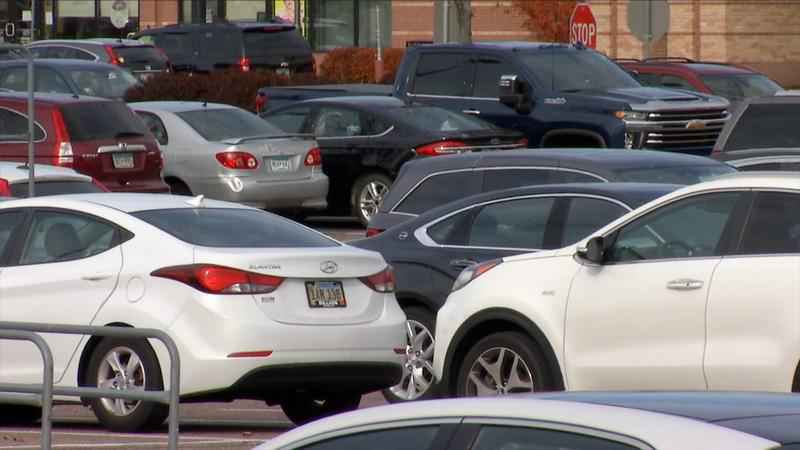 Police said in the carjacking outside Target, the suspects wore masks and carried handguns while stealing a blue Jaguar sedan. In an update Tuesday afternoon, police said that vehicle has since been recovered.

A Target spokesperson told 5 EYEWITNESS NEWS the female victim ran into the store and one of their greeters helped her call 911. They said the employee helped the woman navigate the situation with police, noting that "the right person in the right place can make a big difference."

Police said the victim was not hurt but was understandably traumatized. The stolen car was recovered overnight by Ramsey County Sheriff’s Office, with assistance from Minnesota State Patrol and Minneapolis Police Department.

Target said it will increase security in the parking lot following this incident.

In the armed robbery outside Chick-Fil-A, police said suspects stole a person’s purse and phone.

Police said the Honda Accord stolen from the Holiday gas station had been left running but the owner had the key fob. The car has not been recovered yet.

The Oakdale Police Department also confirmed an incident outside the Hy-Vee at 7180 10th Street North on Monday night.

A spokesperson said a female was getting into her car around 8 p.m. when a male tried to get in the passenger side. The female ran into the grocery store and called police as the male left in a different vehicle. Police said he did not show a weapon, make any threats or say anything during the encounter. The female told police he was wearing a hooded sweatshirt with the hood up. They have not arrested anyone in this case.

"What’s going on around here? I’ve lived in Oakdale almost 30 years and I’ve never seen anything like this," Nanci Kook said. "Where do you go to be safe anymore?"

Kook said she was shopping at Hy-Vee shortly before the incident Monday night.

"Actually, as I was leaving Hy-Vee, I was thinking to myself, ‘Just be aware of your surrounding because it’s dark out and you don’t know who’s going to come up behind you,’" Kook said. "So it was kind of freaky to hear that on the news this morning."

Woodbury police posted to Facebook, asking residents to be "vigilantly aware of their surroundings" and to call 911 if they notice any suspicious activity.

A spokesperson for the department provided this statement to 5 EYEWITNESS News about the crimes:

"Over the summer, we saw strings of opportunistic auto thefts, but this is the first where victims have been confronted and faced with weapons. It’s safe to assume that suspects are arriving in stolen cars, and subsequently stealing additional cars. This recent bold increase in force is concerning, and detectives from around the Metro are in collaboration to solve the cases that have occurred around the Twin Cities area."

Woodbury Police Department has not made any arrests yet.