UPDATE: The Robbinsdale School District said Friday night that administrators became aware of an accusation that a student may have brought a gun to school on Thursday.

In a letter that was sent to families and staff, the district said they did not notify law enforcement.

This is the third letter in a week notifying parents of a gun or possible gun at a school in the district.

The entire letter from the district can be read below: 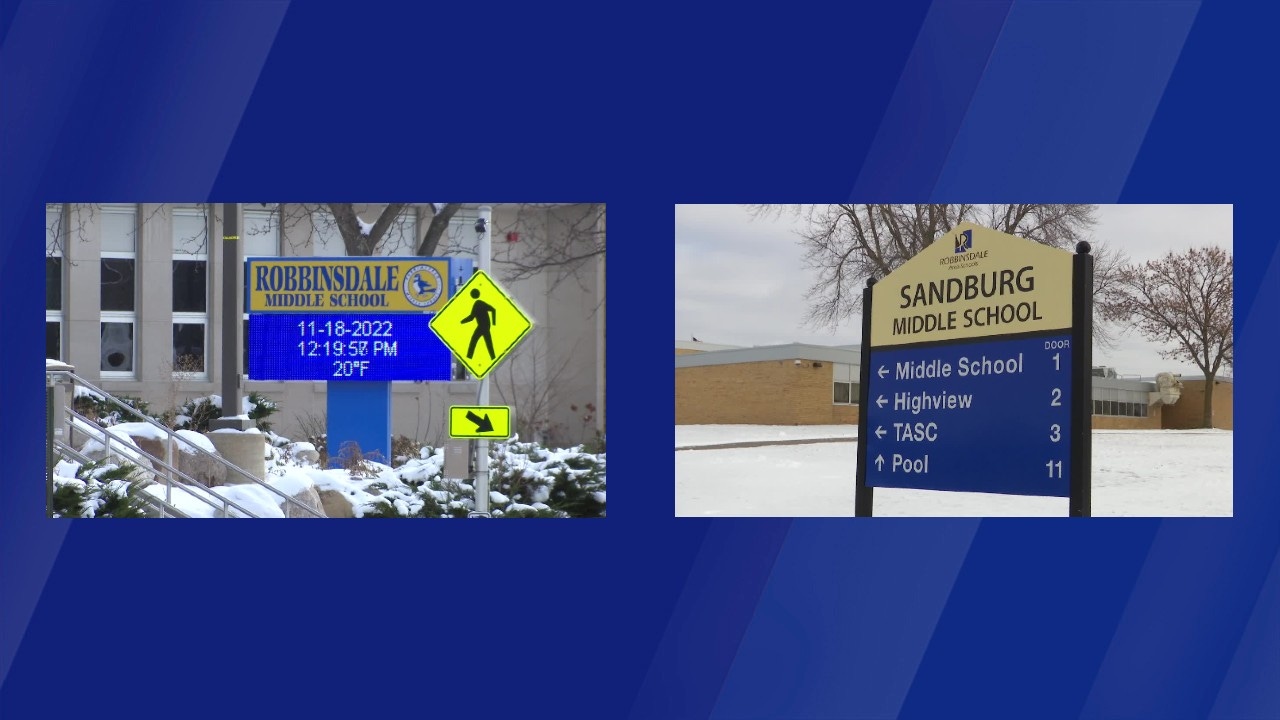 “Our district is in the news this week for reasons that are not positive. Both Robbinsdale and Sandburg middle schools experienced separate incidents involving weapons.

“We’re sad for the anxiety, fear and stress these incidents have caused for students, families, and staff. No one should have to go through this at school. At the same time, we deeply appreciate the members of the public who alerted us to a social media post and other information that raised concern.

“In two cases earlier this week, well after the school day had ended, school leaders learned about alleged situations involving guns. As soon as leaders learned about the situations, they launched investigations to determine if the incidents involved the schools or their students. We have completed our internal investigations and turned the matters over to local law enforcement.

“As we shared with families at both schools, at no point during these investigations did administrators find a weapon on school property, nor were direct threats made to students or staff.

“Unfortunately, just today Sandburg Middle School administrators heard an accusation that a student may have brought a gun to school on Thursday. This news causes us great concern. But, as with the other incidents, school leaders began investigating the situation immediately. The investigation is ongoing.

“Based on what is known thus far, there was no immediate threat to the school, and we did not notify law enforcement.

“Due to state student data privacy laws, we cannot share additional details about those involved, including discipline information. In general, students who bring a gun to school can be disciplined in a variety of ways, including through out-of-school suspension and exclusion from their school.

“Federal laws govern what we can and cannot share with law enforcement in complex situations like these, including video recordings. We will continue to cooperate with the police in any incident that involves an immediate threat.

“This country’s gun culture results in daily occurrences of people, young and old, posting photos and videos of themselves with firearms. However, no student should have access to firearms.

“We appreciate our partnership with the police departments that serve our communities, and we strive to cooperate with them to ensure our schools stay safe.“

5 EYEWITNESS NEWS has also learned that the school board chair has called for a closed-door meeting Monday to discuss the matter further.

In an interview Friday, Golden Valley Police Chief Virgil Green said the delay in district officials reporting the incident at Sandburg Middle School to his agency bothered him.

“It’s something you don’t typically, do not see with how school districts communicate with police, especially when a dangerous weapon is involved,” Green noted, adding it was “very concerning as to the really lax approach that this school.”

In a news release, Green said the district had an obligation under state law to report a student possessing a gun on campus as soon as practicable.

“This was not followed by the leadership at Sandburg Middle School,” Green said in the release. “Almost five days later isn’t practicable.”

Green also said Sandburg is asking his agency to obtain a warrant to see the social media video that prompted the investigation.

“This video is not property of the school,” Green said. “This is a video that the student shared on Snapchat.”

Meanwhile, Robbinsdale Police have launched an investigation into a separate incident of a gun in a school at Robbinsdale Middle School earlier this week.

School officials waited over a day to report that incident to law enforcement, which Robbinsdale police said was concerning to them as well.

Helen Bassett, school board chair for the district, told KSTP in an email that she has “immediately called for a closed session for the board to receive an incident report on all and any recent school safety matters.” That meeting is scheduled for Monday.

Late Friday afternoon, the school district sent out a statement saying it conducts its own investigation before notifying law enforcement when there isn’t any immediate threat. The full statement can be seen below.

Thursday, 5 EYEWITNESS NEWS reported that district officials waited days before alerting law enforcement and parents to a video showing what appeared to be a gun inside Sandburg Middle School.

The incident at Sandburg was followed by another at Robbinsdale Middle School Tuesday, in which a student brought a gun to school and showed it to classmates. That same student is alleged to have made threats on social media Monday evening, but school officials didn’t notify police in Robbinsdale until late Thursday afternoon.

After a late afternoon Nov 17, 2022 call from the Sandburg Middle School principal, Golden Valley police are investigating a Nov 11, 2022 incident involving a student who had a posted a Snapchat video showing himself with a firearm inside of a school bathroom.

Golden Valley Police Chief Virgil Green said he first learned about the incident at the Golden Valley School after being contacted by several news media outlets Nov 16, 2022. Green then contacted the Robbinsdale School District’s security director and superintendent’s office, where he learned the security director was also just hearing about the incident that had occurred five days earlier.

“As we worked to investigate the incident, the school refused to turn over the Snapchat video, stating we would need to obtain a search warrant,” says Green. “This video isn’t property of the school district. It has been shared on social media by the student and others.”

Green said police were able to view the Snapchat video, which is less than six seconds long, late night Nov 17. “It shows a Black male student holding what appears to be an actual firearm, removing a magazine clip and reinserting that clip into the firearm,” explains Green. “The Golden Valley Police Department (GVPD) is working to verify the video was taken inside a bathroom at Sandburg Middle school.”

Green adds that it’s very important for parents to know what the law says about weapons on school campuses.

According to Minn. Stat. section 121A.05, each school board must adopt a policy requiring the appropriate school official to report a student possessing an unlawful firearm to the criminal or juvenile justice systems as soon as practicable.

“This was not followed by the leadership at Sandburg Middle School,” says Green. “Almost five days later isn’t practicable.”

“It’s very important that our schools have a good partnership with GVPD and any local police department,” explains Green. “We are here to help support the school’s safety procedures for both students and staff. When these types of incidents occur, we need to be communicating with each other as soon as possible, so parents know we are doing everything possible to address issues when a firearm is brought on a school campus.”

Green says that once the GVPD completes its initial incident report, investigators will start interviewing the parties involved.

The school district’s statement from Friday afternoon is as follows:

“We’re sad the incident, in which a student was shown in a video holding a gun in a bathroom at Sandburg Middle School, may have caused anxiety, fear and stress for our students, families, and staff. No one should have to go through this at school.

“As we shared with families yesterday, at no point during the school’s investigation into this incident did administrators find a weapon on school property, nor were direct threats made to students, staff or the school community.

“Upon completion of our investigation, we turned the matter over to the Golden Valley Police Department. Due to state student data privacy laws we cannot share additional details about those involved, including discipline information. In addition, federal laws govern what we can and cannot share with law enforcement in complex situations like this, including video recordings. We will continue to fully cooperate with the police investigation, to the extent allowable by law.

“This country’s gun culture results in daily occurrences of people, young and old, posting photos and videos of themselves with firearms. However, we all agree that students should not have access to firearms.

“In this instance, before we notified law enforcement, we needed to determine if the video involved the school or a student at the school.

“We appreciate our partnership with the Golden Valley Police Department and look forward to cooperating to ensure our schools stay safe.”