Over 370 crashes and 200 spinouts reported during Friday snowfall

Snowfall across much of Minnesota left many roads slippery and contributed to several crashes around the state.

The Minnesota State Patrol reported 377 crashes — including 33 involving injuries — statewide between 5 a.m. and 5 p.m. Friday. An additional 214 vehicles ran off the road or spun out, and four semis jackknifed in the timeframe.

None of the crashes resulted in fatal injuries.

Snow started falling early Friday morning in western Minnesota, with maps showing either fully or partially covered roadways. By noon, the snow had fully arrived in the Twin Cities, causing difficulties on the roads in time for the evening commute.

In one case, lanes of Highway 169 near Canterbury Road were shut down due to a crash. Crews could be seen via traffic management cameras working to provide assistance. Crews could also be seen diverting traffic prior to the crash site. 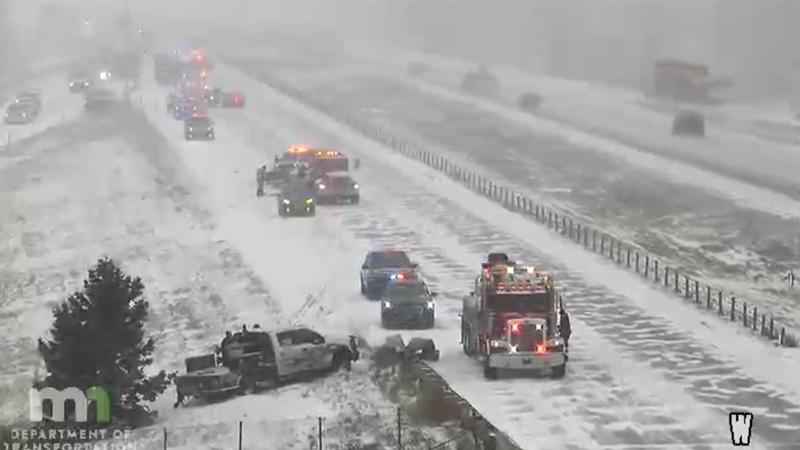 Lanes of Highway 169 near Canterbury Road were shut down due to a crash. [MnDOT]

Plow cameras from the Minnesota Department of Transportation (MnDOT) show there may be low visibility in areas near Marshall, as well as anywhere with open country.

Snow is expected to pick up just in time for the morning commute in the Twin Cities metro area.

Plows have been out since Thursday getting the pavement ready for those driving to work and school, but you’re still advised to take it slow.

Troopers responding to several crashes & spin outs. Blowing snow, along w/some roads getting slippery throughout MN. Use caution, keep the cruise control OFF, headlights/taillights ON, Buckle UP, phone DOWN. This pic I94 west of Sauk Centre jackknifed semi non-life threat inj pic.twitter.com/OSjsdz79p2

While some schools are open in the area, dozens of others have either closed or moved to e-learning. CLICK HERE for an updated list.

Meteorologist Ken Barlow says depending on where in the Twin Cities metro you live, you could see anywhere from 1-3" for the east metro, and 2-4" to the west throughout the day and evening.

Still a crazy setup for the snowfall today. A few inches east of St Paul and up to 8" just west of the metro area. Most Twin Cities west metro areas will see up to 4" by 6 pm when the snow tapers. Sun is back Saturday! It’s also a fluffy snow…easy to move! pic.twitter.com/aXaxANBLOp

However, Barlow says the southwest part of the state will see more, with some places picking up close to a foot of snow.

Meanwhile, heavy snow was spreading across a large swath of the Midwest, where travel conditions deteriorated and scores of schools closed or moved to online instruction.

The National Weather Service issued a winter storm warning for parts of Minnesota, the Dakotas, Iowa and Illinois, where forecasters were expecting up to 10 inches of fresh snow. The weather service tweeted that the snow will combine with gusty winds to produce slippery roads and reduced visibility.

Forecasters say the fast-moving storm may make travel difficult across parts of the Northern Plains and Upper Midwest into the Mid-Mississippi Valley through Saturday morning.

If you and your family and friends are out enjoying the snowfall, make sure to send us your photos! CLICK HERE to do so.