"Basically it’s making a first impression each side is going to layout for the first time what their theory of their case is,” said Mark Osler, a University of St. Thomas law professor and former federal prosecutor. 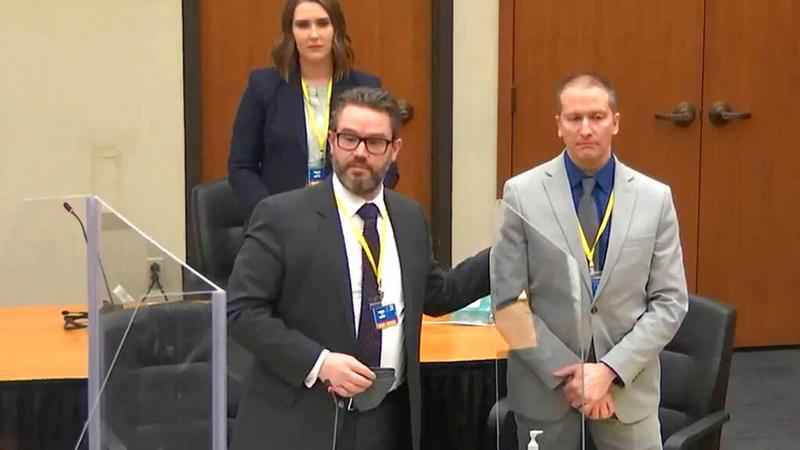 In this screen grab from video, defense attorney Eric Nelson, left, defendant and former Minneapolis police officer Derek Chauvin, right, and Nelson's assistant Amy Voss, back, introduce themselves to jurors as Hennepin County Judge Peter Cahill presides over jury selection in the trial of Chauvin Wednesday, March 17, 2021 at the Hennepin County Courthouse in Minneapolis, Minn. Chauvin is charged in the May 25, 2020 death of George Floyd.[Court TV]

Osler said he’ll be listening to see if Eric Nelson, Chauvin’s defense lawyer, will say if his client will take the stand during the trial.

State vs. Chauvin: Who’s who in the courtroom?

Osler estimates that both sides each could take more than an hour to make their opening statements to the jury.

“The government is going to set out methodically what the evidence is, that will prove each element of the crime,” Osler said. “The defense is going to have a turn to explain why there is reasonable doubt and there’s something’s they may tip their hand about that will come up later in the trial."

"It’s going to be a one or two-sentence opening salvo in which he’s really trying to explain to the jurors and to implant in their minds how he sees the case on behalf of his client," Daly said.

Nelson once sat in Daly’s class back in law school.

Chauvin’s background may also come up during opening statements, according to former U.S. Attorney for the District of Minnesota Erica MacDonald.

“The prosecution is the one that really has to prove by proof beyond a reasonable doubt each and every element of the three charges against former officer Chauvin. The defense, on the other hand, do not have to prove innocence,” MacDonald said. “They bear no burden of proof at all — it’s all on the prosecution — so you’ll see that difference in what they’re talking about in their opening statements. I would expect for both of them to talk significantly about causation. That, as we know, is going to be a major issue in this case.”

In court earlier this month, Assistant Attorney General Matthew Frank said the prosecution intends to bring in photographs of Floyd at various stages of his life, along with two spark-of-life witnesses.

“One is a family member who would talk about Mr. Floyd’s family and his growing up and him being a brother to this witness,” Frank said. “As many people know, during the incident Mr. Floyd references his mother, so there will be discussions about that and why that was so important to him. Another spark-of-life witness will talk about more contemporaneous things in Mr. Floyd’s life since he came to Minnesota.”

How to watch live coverage of the Derek Chauvin trial

MacDonald told us it’s not unheard of to have two spark-of-life witnesses.

“Given the length of his life and given that he lived in different spots and they might have different things to offer … they’ll tell different sides, different parts of Mr. Floyd’s life,” she said. “The spark-of-life witness, it’s not about impassioning the jury or making them mad someone died — it’s about humanizing the person because they are also part of the trial.”

MacDonald believes it’s likely they’ll only get through one or two witnesses on Monday.

“You don’t want to wear the jury out on the first day,” she said. “You want to keep them fresh and alive and really listening and paying close attention because both sides deserve a fair trial.”

State prosecutors filed a motion Friday asking the judge to weigh in on what can be said during those opening statements.

The state wants both sides excluded from attempting to characterize George Floyd’s thought processes that would have been "unknowable" to ex-officer Chauvin at the time.