Encouraging projections about the economy were shared Monday by the Congressional Budget Office. The non-partisan advisory group released its 2021-2031 Economic Outlook.

According to the report, more Americans will return to work over the next year as the economy expands.

It predicts real GDP, which measures the values of goods and services, will “expand rapidly over the coming year, reaching its previous peak in mid-2021”.

Those who left the workforce will seek employment again, restoring the workforce to its pre-pandemic size in 2022, according to the report. It also anticipates the number of people employed will reach pre-pandemic levels by 2024.

“They are the first to acknowledge that these projections come with a lot of uncertainty,” said V.V. Chari, a professor of economics at the University of Minnesota, “It’s certainly more positive than it was six months ago but look, we’re in the middle of the worst pandemic in a century. It’s a hard time for us to say things are looking great, no they’re not, but certainly it does appear that there is a light at the end of this tunnel.” 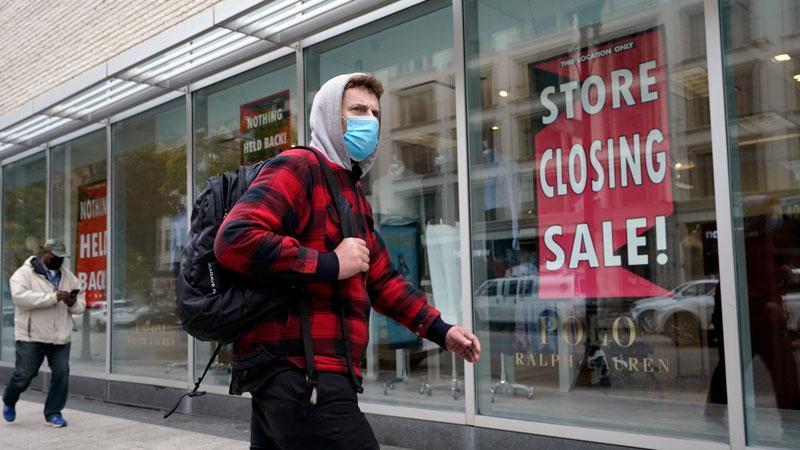 A passer-by walks past a store closing sign, right, in the window of a department store, Tuesday, Oct. 27, 2020, in Boston. Americans may feel whiplashed by a report Thursday, Oct. 29, on the economy's growth this summer, when an explosive rebound followed an epic collapse.[AP/Steven Senne]

Chari, who is also an advisor to the Federal Reserve Bank of Minneapolis, told 5 EYEWITNESS NEWS the projections align with what private-sector economics are forecasting.

“The vast majority of professional economists have also become much more optimistic over the last six months,” Chari said. “Partly because of the developments in respect of the vaccine, partly because the economic downturn was exceptionally severe in the second and third quarter but the recovery was much more rapid than most people had expected.”

Despite growth, however, unemployment is not expected to reach 2019 levels.

The average annual unemployment in 2019 was about 3.6 percent. The report estimates that between 2026 and 2031, average unemployment will be 4.1 percent.

“These are averages,” Chari said. “You have to remember late 2019, early 2020 were exceptionally strong periods for the labor market in the United States. We reached an unemployment rate in late 2019 and early 2020 which was the lowest it had been in 50 years.”

According to Chari, the health of the economy will depend on the vaccine rollout and whether people practice social distancing and take basic precautions.

“We here in Minnesota have a very diversified economy and so in many ways we mirror what is happening in the nation overall,” he said. “We should expect the economy gradually to recover over the course of the next year and a half […] the pace of that recovery is going to be determined in substantial part not so much policy decision on the economics’ sphere as by decisions on the public health sphere.”

In December, the Minnesota Dept. of Employment and Economic Development said job growth “is expected to slow over the coming months and a recovery of all jobs lost is not projected to be reached until late 2022 or early 2023.”

Growth will depend on case numbers and federal relief spending, according to DEED. The state agency expected 116,000 jobs to be added between the third quarters of 2020 and 2021, with it accelerating during the spring and summer months when the vaccine is more readily available.

The largest gains are expected in hospitality and food services, health care and social assistance, according to DEED. Arts, entertainment, recreation and local government are also expected to see a rebound.