MPCA: Contaminated water found in Andover but drinking water is ‘clean and safe’

While MPCA and Minnesota Department of Health employees conducted a water sampling near the closed WDE Landfill in Andover, they found high levels of a chemical, which chemical is likely a carcinogen and was discovered in private residential wells near Bunker Lake Boulevard and Crosstown Boulevard.

The "chemical of concern" is called 1,4-dioxane, which MPCA Assistant Commissioner Kirk Koudelka said has been detected near manufacturing sites, industrial sites and landfills. It can be a byproduct of the manufacturing process for products such as cleaners, detergents, adhesives, inks and car fluids. Its main use is as a stabilizer for the chlorinated solvent 1,1,1-trichloroethane, often used for industrial purposes.

The WDE Landfill in Andover was a municipal dump that accepted hazardous waste until it closed in 1983. The MPCA said it discovered contamination in the nearby Red Oaks neighborhood as a result of expanding monitoring near the site. Agency officials noted they are still investigating the exact source of the contamination. 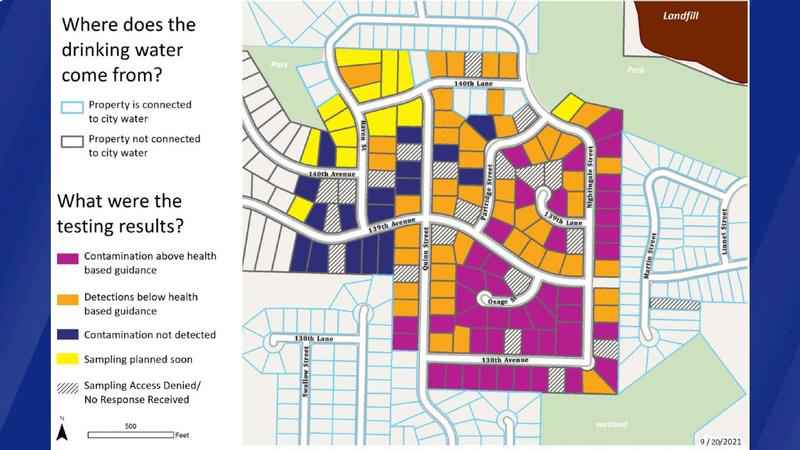 Fortunately, according to the MPCA, all Andover residents don’t need to worry. Residents using a municipal water supply have access to safe drinking water.

"Andover works hard to provide residents with safe and reliable municipal water supply that meets federal and state water quality requirements. They work with the Minnesota Department of Health to test drinking water for more than 100 contaminants," the MPCA said, in part.

The agency said it asked to sample 142 private wells in Andover and so far has found 43 instances of the contaminant.

The source of the contamination remains under investigation. MDH and MPCA are collecting additional water samples in order to determine the extent of the contamination. Residents with the study area have received requests from the MPCA to sample their wells. Additionally, they have been notified if the sample results are a health risk and are receiving bottled water.

The MPCA discovered the same contaminant while testing private wells near the edge of the Water Gremlin industrial site in Gem Lake near the end of July. They asked 150 homeowners on private wells to allow sampling there. Of those, 15 wells exceeded the health risk limit for 1,4-dioxane.

The MPCA is continuing to work with city officials to identify and implement the best long-term solution to providing clean and safe drinking water.

Impacted homeowners are urged to use bottled water for drinking and cooking.

"It has the potential to be carcinogenic or cause cancer, based on studies in laboratory animals, as well as cause other effects to the liver and so forth," said Jim Kelly, manager of the environmental surveillance and assessment program with MDH.

Kelly noted the effects have only been observed rodents exposed to high levels of 1,4-dioxane and there haven’t been any studies documenting a connection between exposure and cancer in humans. Still, officials urge homeowners to take the proper precautions.

"We will continue to do work to delineate the entire scope of the plume and its potential source," Koudelka said.

Chris Carroll and Tammy Paulson, who live in Andover, told 5 EYEWITNESS NEWS they received a letter from the state alerting them to the contamination in August. Carroll said he believed something wasn’t right with his water after experiencing irritation while drinking and showering.

"I can feel my eyes burning and my skin burning and prior to that, even drinking the water, I could tell my tongue was burning," Carroll said.

The couple said they’ve had at least 20 conversations with various state agencies since becoming aware of this issue but don’t feel like they’ve received many answers as to what went wrong and how long they’ve been drinking contaminated water.

The couple is considering legal action and said they would welcome help from an attorney in dealing with this issue.

5 EYEWITNESS NEWS asked the MPCA if there are any indications on the timeline of the contamination. A spokesperson responded:

"The contamination is not the result of a recent event. We don’t have data that shows when the contamination we are investigating occurred. We do have information about 1,4 dioxane production and use. Manufacturing of 1,4 dioxane reached its highest levels in the early 1970’sand mid 1980’s It is estimated that 90% of 1,4 dioxane use has been to stabilize chlorinated solvents like TCE, PCE and TCA. The practice of using 1,4 dioxane as a stabilizer occurred from the 1950’s until 1996."

MPCA said it is working with the impacted areas on long-term solutions. They provided the city of Andover with a grant to explore options for connecting homes on private wells to municipal water systems.

A virtual public meeting will be held on Thursday, Sept. 30 at 6 p.m. For more information, click here. Another public meeting for Gem Lake residents will take place virtually on Oct. 14.

For other questions or additional information about private well sampling, contact John Hunter of the MPCA through email or by calling 651-757-2456.