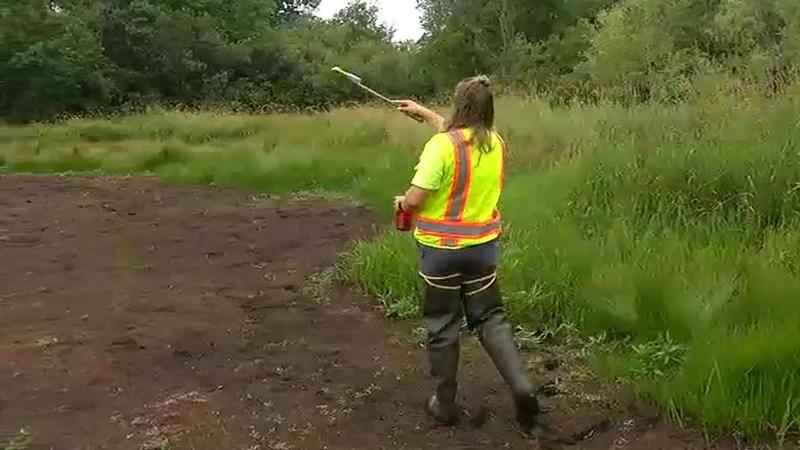 Drought is never good for a region, but the Metropolitan Mosquito Control District (MMCD) says if there’s one good thing to come from the recent lack of rain, it’s there are fewer mosquitoes.

Before Wednesday’s rain, 5 EYEWITNESS NEWS joined a mosquito control team in Oakdale as it laid down preventative treatment.

On Wednesday, a mosquito control team set out to a dry pond bed in Oakdale. In anticipation of a week of rain, the team scattered dry pellets onto what’s normally a classic wetland submerged in a foot of water.

"Obviously, it’s been a very dry season, so everything is pretty dry," said Lauren Smith, an MMCD field technician.

According to MMCD, there are fewer mosquitos this season because of the dry weather, but Smith says prevention is paramount, especially ahead of a week of expected heavy rain.

Technicians like Smith do property inspections to check for standing water in containers such as wheelbarrows and buckets and spread pre-hatch and other treatments in case mosquitoes are carrying diseases like West Nile virus. She says early July is when they will typically start to find insects testing positive for the virus, but they haven’t found any this year.

Alex Carlson, a public affairs coordinator with MMCD, said it’s too early to have any data on West Nile cases in humans because the peak season is just beginning.

MMCD said whether or not a mosquito is rain-dependent, the organization is still seeing far fewer of the bugs this year, partly because the end of last year was also dry.

Crews will come back out in another month to do more preventative treatment.