Thirteen people were killed and another 145 were injured when the Interstate 35W bridge spanning the Mississippi River in Minneapolis suddenly collapsed during rush hour.

The incident garnered national attention and sparked conversation about road and bridge safety across the United States.

The National Transportation Safety Board blamed the collapse on gusset plates, which were half as thick as they should have been due to a flaw in the original design.

The new bridge opened to the public on Sept. 18, 2008, and a memorial for the victims was also built near where the bridge once stood. 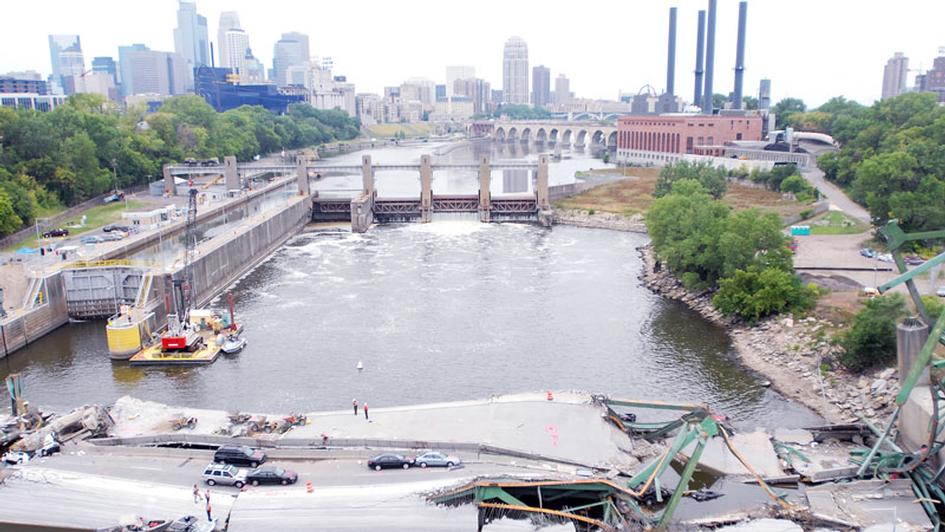 The aftermath of the I-35W bridge collapse. (Credit: Minnesota Daily)

Fifteen years after the collapse, we’re revisiting coverage of the day on 5 EYEWITNESS NEWS and KSTP.com.

Monday morning, Gov. Tim Walz called for Minnesotans to “recommit to investing in the future of our state’s infrastructure to ensure nothing like the I-35 bridge collapse ever happens in Minnesota again.”

TIMELINE OF THE BRIDGE COLLAPSE

Click each month via the dropdown below to see the timeline of events.

At 6:05 p.m., the Interstate 35W bridge spanning the Mississippi River in Minneapolis collapses.

An order for a review of bridge inspection processes is issued from Governor Tim Pawlenty’s office. The order also includes an emergency inspection of other, similar bridges.

In the days following the collapse, Pawlenty warns against a rush to judgment about the cause of the Interstate 35W bridge collapse, after a misprioritization of earmarks is proposed.

FBI and U.S. Navy divers assist at the scene with special equipment to help in the recovery process.

The Minnesota Department of Transportation begins demolition of the bridge’s remains, after the recovery process is complete.

Dive teams recover the final victim from the Mississippi River. Greg Jolstad of Mora was a construction worker on the bridge when it collapsed.

Preliminary plans for a bridge replacement are made public.

Through September and into October, research and negotiations begin for building a new bridge.

Colorado contractor Flatiron/Manson is selected by MnDOT for the new bridge.

Meanwhile, the Minnesota Court of Appeals rejects a challenge to the state's decision to award the contract to Flatiron/Manson.

Responding to the order released a day after the collapse, MnDOT crews complete special inspections of roughly 4,000 bridges throughout the state.

The National Transportation Safety Board states the bridge collapsed because gusset plates were half as thick as they should have been, due to a flaw in the original design from the 1960s. Board members also criticized Minnesota officials for allowing 287 tons of construction materials to be stockpiled on the bridge’s center on the day of the collapse.

Construction of the new bridge reaches the halfway mark.

"I can't say I anticipated this type of progress at this time," project manager Jon Chiglo said.

The Interstate 35W bridge is substantially complete, putting the Flatiron Manson construction team in line for a $25 million bonus.

A $38 million deal is reached for bridge collapse victims and Gov. Tim Pawlenty says in a prepared statement that he looks forward to signing the legislation into law.

"It provides needed relief and support for victims and family members directly impacted by the I-35W bridge tragedy," Pawlenty said.

The new I-35W bridge opens to traffic, completed even earlier than expected.

A panel of lawyers administer a nearly $37 million victim compensation fund created by the state legislature for the victims of the collapse.

The new Interstate 35W bridge is named one of the Public Works Projects of the year due to its accelerated construction and the methods used to build it. The American Public Works Association names the bridge to receive its award in the category of Disaster or Emergency Construction and Repair.

At the end of July, the state sues URS Corp., the engineering firm that was hired to inspect the 1960s-era bridge and suggest ways to shore it up before it collapsed, claiming the firm “violated the applicable engineering standard of care” and failed to warn the state “of the substantially compromised and urgent hazardous condition of the bridge.”

Paving company Progressive Contractors Inc., which was hired to resurface the old 35W bridge, settles with collapse victims, their families and the state of Minnesota.

URS Corp. and the state of Minnesota settle the lawsuit filed in July 2009 over the 2007 collapse.

Attorneys representing the victims of the 35W bridge collapse announce a $52 million settlement is reached in the lawsuit against URS Corporation. It resolves the last remaining piece of litigation brought forward by victims.

The "35W Bridge Remembrance Garden" near Gold Medal park in Minneapolis is dedicated to those affected by the bridge collapse.

View photos from the day the bridge collapsed via the gallery below. WARNING: Some contain imagery that may be sensitive to viewers.