Minnesota wineries are on track for a bountiful grape harvest after what they describe as a "California summer."

Winehaven Winery and Vineyard in Chisago City expects an early harvest, with 20-30% more grapes than usual.

"The fruit has just really responded to the heat in a way we haven’t seen before," said Kyle Peterson, one of the owners of Winehaven. "I think 2021 is for sure going to be a banner year."

Those at the 40-acre family vineyard believe the flavor of the wines made from this season’s grapes will be unprecedented for Minnesota, thanks to an early spring and a hot, dry summer.

"They’re like candy. They’re so sweet already and in a couple more weeks, they’re just going to be like magic," Peterson said. "The warmer and drier it is, the more intense the grapes are. A little bit of rain can swell up the fruit and dilute your juice and ultimately dilute your wines. And it doesn’t seem like we’re going to get that this year." 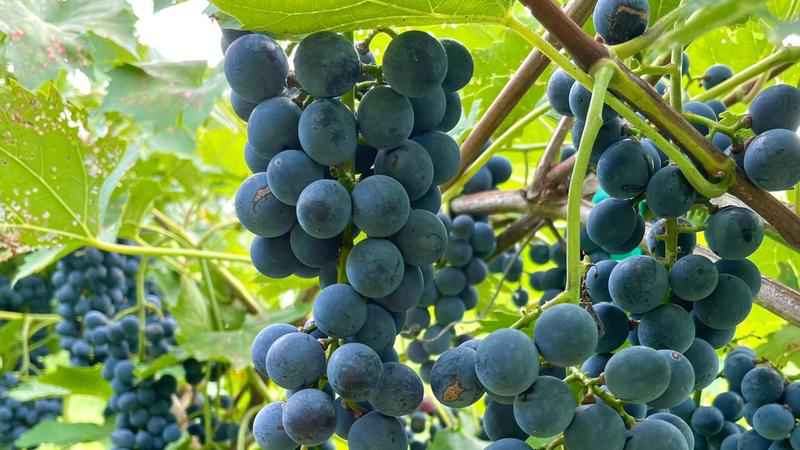 Peterson said Minnesota typically produces high-quality, fruity white wines, but they expect the red wine grapes to do extremely well this year as well, which can be unusual for this part of the country.

"These will be really bold, really big, just really impressive red wines," Peterson said. "I think we’re definitely going to raise some eyebrows and turn some heads and get noticed in a way that we never have in the past. I can’t wait to get these wines evaluated by the world-class judges and see what they think of them."

He noted the grape clusters are about double their normal size this year as well. He showed 5 EYEWITNESS NEWS clusters of their Nokomis variety grapes, which normally grow to about a half-pound. This year, some clusters weigh closer to a pound.

"I’ll take some pictures and I’ll show these to the grandchildren someday and say, ‘Remember the year of 2021, how amazing those clusters were? How amazing that fruit was?’" Peterson said.

Winehaven expects to start picking grapes in late August, a few weeks earlier than they ever have before.

"If the pattern continues just for the next couple weeks, it’s just going to be one of those — I hate to say perfect — but probably a perfect year," Peterson said.

The wines made from this season’s grapes will start to be available around Thanksgiving, with others released in the spring.