Minnesota to expand vaccine eligibility once 70% of seniors receive doses

Gov. Tim Walz, along with state and health leaders, discussed the process for expanding COVID-19 vaccine eligibility for Minnesotans on Thursday afternoon.

“We can finish this the end is in sight and we can do it the right way,” said Gov. Walz.

The governor announced that at least 70% of Minnesotans ages 65 and older will be vaccinated before eligibility is expanded to other groups. 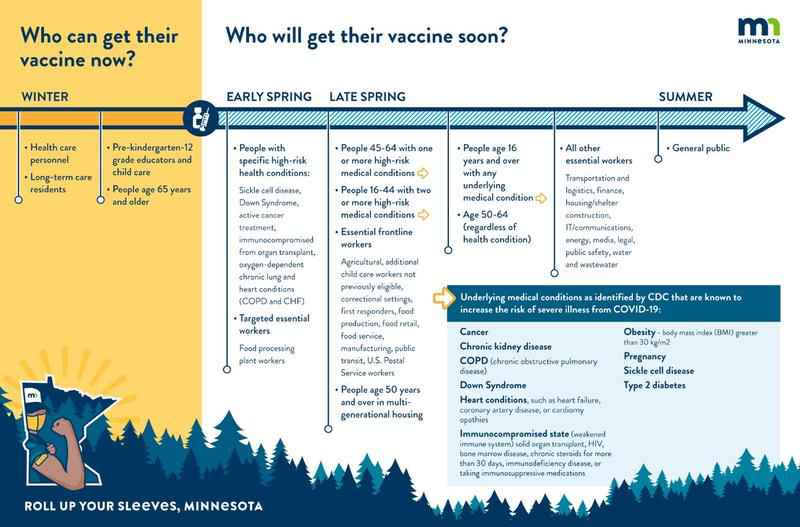 State officials said the state is hoping to reach that benchmark by the end of March.

“I’ve heard somebody say well if this group is the most vulnerable why wouldn’t you set the number at 100 percent? We’ll never get to 100 percent, we never even get close to 70 on flu shots,” said Gov. Walz. “What we do believe is 70 is an ambitious number.”

Once the state reaches the 70% threshold for vaccinating seniors, eligibility will expand based on underlying health conditions and risk of exposure in the workplace, Walz said.

“This is a freeway that’s being built and that freeway is running and we’re almost done with the healthcare folks, the seniors,” said Gov. Walz. “That lane will continue at 65 miles per hour and we will merge in another lane because we have more vaccines and that lane will go on and as that lane starts to get further down the line, we’ll merge more people and this will accelerate.”

According to a full timeline released on Thursday, the top-priority health conditions include people with sickle cell disease and Down syndrome, people who are undergoing cancer treatment, and people who are immunocompromised from organ transplants or have oxygen-dependent chronic lung and heart conditions such as COPD and CHF.

People with those health conditions, as well as food processing plant workers, will be eligible to receive the vaccine in early spring.

Eligibility will also expand to people 50 years and older living in multi-generational housing and essential front-line workers in the following sectors:

The next tier, which Malcolm projected would be reached between May and June, includes people age 16 and over with any underlying medical condition and all people ages 50 and over. Eligibility will then be expanded to all other essential workers.

The Governor’s Office says vaccines will be open to the general population by this summer, based on current projections.

“We set out to protect the most vulnerable Minnesotans, and we are honoring that commitment. Older Minnesotans have borne the brunt of the COVID-19 pandemic and we are focused on making sure they get vaccinated and keeping them safe," Walz said in a statement. "These vaccines work — we can see that in the plummeting cases, hospitalizations, and deaths in long-term care facilities around our state."

According to a news release from the Governor’s Office, at least 43% of Minnesotans 65 and older have been vaccinated thus far. As a result, long-term care facilities have seen a 97% reduction in deaths since the peak in November, and cases are down 89%.

Close to 90% of all COVID-19 deaths in Minnesota have been among people 65 and older, the release stated.

If demand slows down among the 65 and older population before they reach their 70% vaccinated goal, Walz told reporters he’ll work with partners to determine whether to move ahead with the next group.

Walz and Minnesota health officials have said they’re anticipating receiving a larger supply of vaccine doses from the federal government in the coming weeks. The current plan does not consider that increase in doses, or the possibility of the Johnson and Johnson vaccine getting approval.

“Everything I have seen leads me to believe it is not going to be less [vaccine], it’s going to be more which means the timeline moves to the left and accelerates,” said Walz.

As a coalition we’re ready for more,” said Andrea Walsh, president and chief executive officer for HealthPartners. “We’re currently administering 7,800 vaccines a day and we’ve got the capacity to administer 20,000 a day currently and, if and when that highway opens up and we get access to more, we can double that yet again.”

She also addressed the concerns that some who are 65 and older are currently having trouble accessing vaccines.

Across the healthcare community, we haven’t had enough vaccine to do 65 and up,” said Walsh. “For those 75 and up, the likelihood of hospitalization and death is far greater – five to six- times greater than 65 and up and so as a system for instance, for HealthPartners, we began at 75 and up […] we’re currently at 70 and we can’t wait to get to 65 and the other categories.”

Gov. Walz didn’t rule out the possibility of a 2021 Minnesota State Fair.

“Are we going to get to the place where we have thousands and thousands of people elbow to elbow? I don’t know at this time but I think the probability is going up every single shot we’re giving,” said Gov. Walz.