Terra and Jason Leight say this has been the most difficult year of their lives.

A time of pain, loss, and many questions, after the sudden death of their son, Zachary.

“You hear about sudden cardiac arrest, but I didn’t know it would affect me,” Terra says.

“You’re not only losing your child, but they die in your lap,” Jason adds quietly. “It’s tough.” 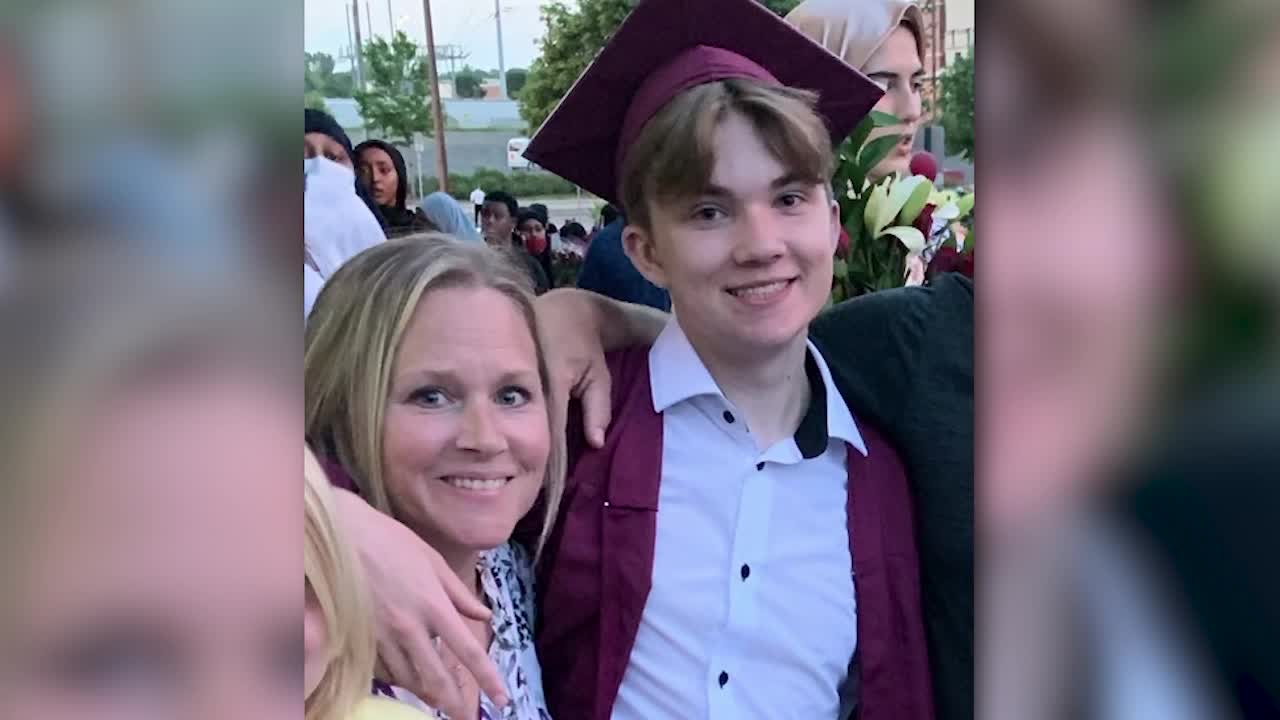 But on January 7th, he started feeling ill and disoriented.

Two days later, a Sunday, it got worse.

“He ended up getting sick, just vomiting occasionally,” Terra recalls. “He got himself dressed and he walked to the car.”

The Leights began driving Zachary to an urgent care, heading out on I-694, near their New Brighton home.

Terra recalls looking in the back seat, and seeing her son’s eyes roll back, and his fingers curl up.

They pulled over to the side of the road, and Terra climbed into the back seat to help.

“It was three minutes later that he had passed in the car, and I provided the CPR and called 911,” she remembers.

The couple says paramedics arrived in minutes — and later, a medical team at Children’s Minnesota worked on Zachary for more than an hour.

But they were unable to revive him.

“Never in my mind would I think that he was going to die, otherwise I probably wouldn’t have let him walk to the car,” Terra says. “We would have called 911, or went to my neighbor who has an AED.”

Terra says her son’s cause of death was listed a sudden cardiac arrest, also known as SCA.

She adds the death certificate also made note of a condition called left ventricular hypertrophy, or LVH for short.

“It affects the heart walls or the muscle thickens, and they found that his was mildly thick,” Terra says.

The National Institute of Health says between fifteen and twenty percent of Americans have LVH.

But Dr. Rajat Kalra, an assistant professor of cardiology at the University of Minnesota, says the condition is rare in young people.

“I would say even for a high school athlete, it’s a little unusual to have left ventricular hypertrophy,” he explains.

Kalra says there are dozens of causes, ranging from high blood pressure, to an abnormal heart rhythm, to genetic factors.

“That’s something our field in general is studying more carefully,” Kalra notes. “So these are generally people who are healthy and sometimes it’s picked up incidentally.”

The Minnesota Department of Health says 2,964 people died from sudden cardiac arrest in 2021.

In the 15-to-24-year-old age group, twenty-five people in the state died from SCA.

The Leights say Zachary’s death was an unexpected, terrible shock since he appeared to be in good health.

“He saw a doctor three months prior and his heart was fine,” Terra says. “He had his wellness check and he was fine, and somehow developed something that killed him.”

After grieving, she began looking for answers.

They also had echocardiograms, an ultrasound of the heart.

While everyone in the immediate family tested normal, further testing found a red flag.

Kirsten Christianson, Terra’s cousin, says in September, she took her 11-year-old son James for a checkup, after his pediatrician found he had high lipid levels.

She says she shared Zachary’s story with a cardiologist.

He was later diagnosed with hypertrophic cardiomyopathy, a thickening of the heart — a condition similar to LVH.

“We were at the cardiologist — he actually had borderline cholesterol and she was asking about family history,” Christianson says. “The walls of his left ventricle are thickened to two times the size of an adult male’s.”

She says James has had to limit his physical activity, and is on heart medication.

Christianson says she hopes he’ll be able to carry a portable defibrillator soon.

“Had that not happened to Zach, there’s no reason I would have thought to mention anything to that degree,” Christianson declares. “I think the biggest one for us is being vigilant and being a tremendous advocate for your children — being the one voice in the room for your kids.”

Dr. Kalra says if anyone in your immediate family is diagnosed with LVH, he recommends you get an EKG and a heart ultrasound — and check with your doctor if you have questions.

One resource in the metro is ‘Play for Patrick’ — the Patrick Schoonover Heart Foundation — named after the 14-year-old Minnesota boy who died of multiple heart defects during a hockey game in 2014.

Since 2015, the foundation has set up nearly 4200 free heart screenings for kids.

Meanwhile, in a corner of the Leight’s living room is a special place, celebrating Zachary’s life.

There are photos and mementoes, including a plaque that says ‘because someone we love is in heaven, we have a little heaven in our home.’

The family has started a non-profit they call ‘Soles and Fishes.’

The name comes from Zachary’s love of shoes and fishing.

The Leights used a previously scheduled trip to Mexico this past March, to start up a shoe and clothing drive for children there.

The effort has also grown into donating fish to feed families.

Terra says so far, the non-profit has donated hundreds of shoes and 750 pounds of fish in Mexico.

She explains a new drive has donated 120 backpacks filled with school supplies, and 1,200 pairs of new socks.

The Leights say they are hoping to connect with schools or food shelves in Minnesota, to find families in need of an annual sponsorship.

Terra says these efforts are ‘a purpose in our pain.’

The couple hopes what happened to Zachary will be a wakeup call — for parents to consider heart testing for their kids, especially for those trying out for sports.

“What we’ve learned is it’s so simple to screen,” Jason says. “Our kids have been screened, I’ve been screened, it was literally a ten-minute procedure. I feel like especially if a kid is in athletics, when you’re in for your annual physicals, get it checked, or at least ask about it.”

They say getting heart checks for more kids would be a would be a good legacy for Zachary — especially among youngsters taking part in sports.

“I’m one voice, and I feel like if there’s more parents that are educated that this could happen,” Terra adds. “Maybe a change could happen at their physicals and more EKGs and echoes can be done.”

You can find out more about ‘Play for Patrick’ — the Patrick Schoonover Foundation here.