Voters in Minneapolis were deciding Tuesday whether to replace the city’s police department with a new Department of Public Safety, more than a year after George Floyd’s death under the knee of a white police officer launched a movement to defund or abolish police across the country.

Democratic Mayor Jacob Frey was also in a tough fight for a second term, facing a bevy of opponents who have attacked him for his leadership in the wake of Floyd’s death. Frey opposed the policing amendment. Two of his leading challengers in the field of 17 candidates, Sheila Nezhad and Kate Knuth, strongly supported the proposal.

Minneapolis voters were also deciding whether to replace the city’s unusual "weak mayor, strong council" system with a more conventional distribution of executive and legislative powers that would give the mayor clearer authority over day-to-day government operations.

While results from the ballot questions were expected Tuesday night, the mayoral race was a question mark because the city uses ranked choice voting. If no candidate reaches 50% in the first round of counting, the winner would be determined after a tally Wednesday of second- and potentially third-choice votes.

The future of policing in the city where Floyd’s death in May 2020 launched a nationwide reckoning on racial justice overshadowed everything on the municipal ballot. The debate brought national attention to the election, as well as a river of out-of-state money seeking to influence a contest that could shape changes in policing elsewhere, too.

Election Day: What you need to know 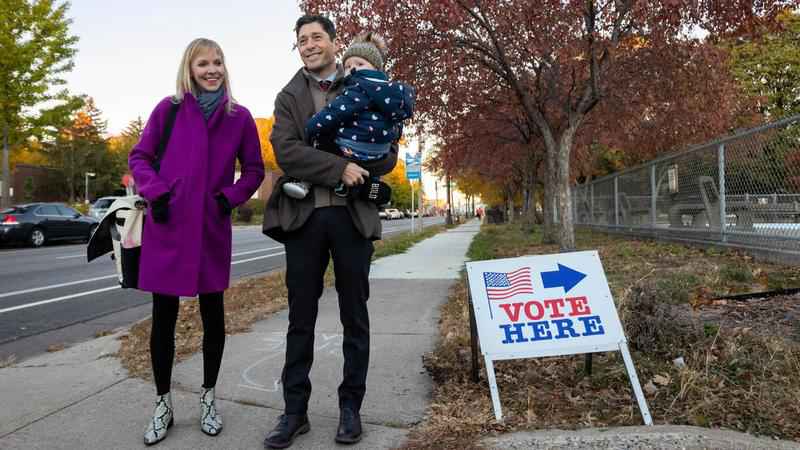 Mayor Jacob Frey casts his vote on Election Day alongside his family at the Marcy Arts Magnet Elementary School on Tuesday, Nov. 2, 2021 in Minneapolis. Voters in Minneapolis are deciding whether to replace the city’s police department with a new Department of Public Safety. The election comes more than a year after George Floyd’s death launched a movement to defund or abolish police across the country.[AP Photo/Christian Monterrosa]

The proposed amendment to the city charter would remove language that mandates that Minneapolis have a police department with a minimum number of officers based on population. It would be replaced by a new Department of Public Safety that would take a "comprehensive public health approach to the delivery of functions" that "could include" police officers "if necessary, to fulfill its responsibilities for public safety."

Supporters of the change argued that a complete overhaul of policing is necessary to stop police violence. They framed it as a chance to re-imagine what public safety can be and to devote more funding toward new approaches that don’t rely on sending armed officers to deal with people in crisis.

But opponents said the ballot proposal contained no concrete plan for how the new department would operate and expressed fear that it might make communities already affected by gun violence even more vulnerable to rising crime. The details, and who would lead the new agency, would be determined by the mayor and the City Council.

Two nationally prominent progressive Democratic leaders — U.S. Rep. Ilhan Omar, who represents the Minneapolis area, and state Attorney General Keith Ellison — both supported the policing amendment. But some leading mainstream liberals, including Gov. Tim Walz and U.S. Sens. Amy Klobuchar and Tina Smith, opposed it and feared the backlash could lead to Democratic losses across the country in 2022.

Minister JaNaé Bates, a spokeswoman for the pro-amendment campaign, told reporters Monday that even if the proposal fails, the activists behind it have changed the conversation around public safety.

"No matter what happens, the city of Minneapolis is going to have to move forward and really wrestle with what we cannot unknow: that the Minneapolis Police Department has been able to operate with impunity and has done quite a bit of harm and the city has to take some serious steps to rectify that," Bates said.