Tentative agreements have been reached between the Minneapolis Public Schools (MPS) and the Minneapolis Federation of Teachers (MFT), as well as the Education Support Professionals (ESPs).

The announcement comes after more than two weeks of negotiations, and students having been out of class for 14 days. As previously reported, teachers first started picking Tuesday, March 8, the first time they did so in 50 years.

If the vote passes, students will return to school Monday, March 28.

During the news conference, Superintendent Ed Graff addressed students in the district, saying he and other district leaders are “really looking forward to having you back.”

District leaders also thanked parents and students for their patience, saying their focus right now is on rebuilding. 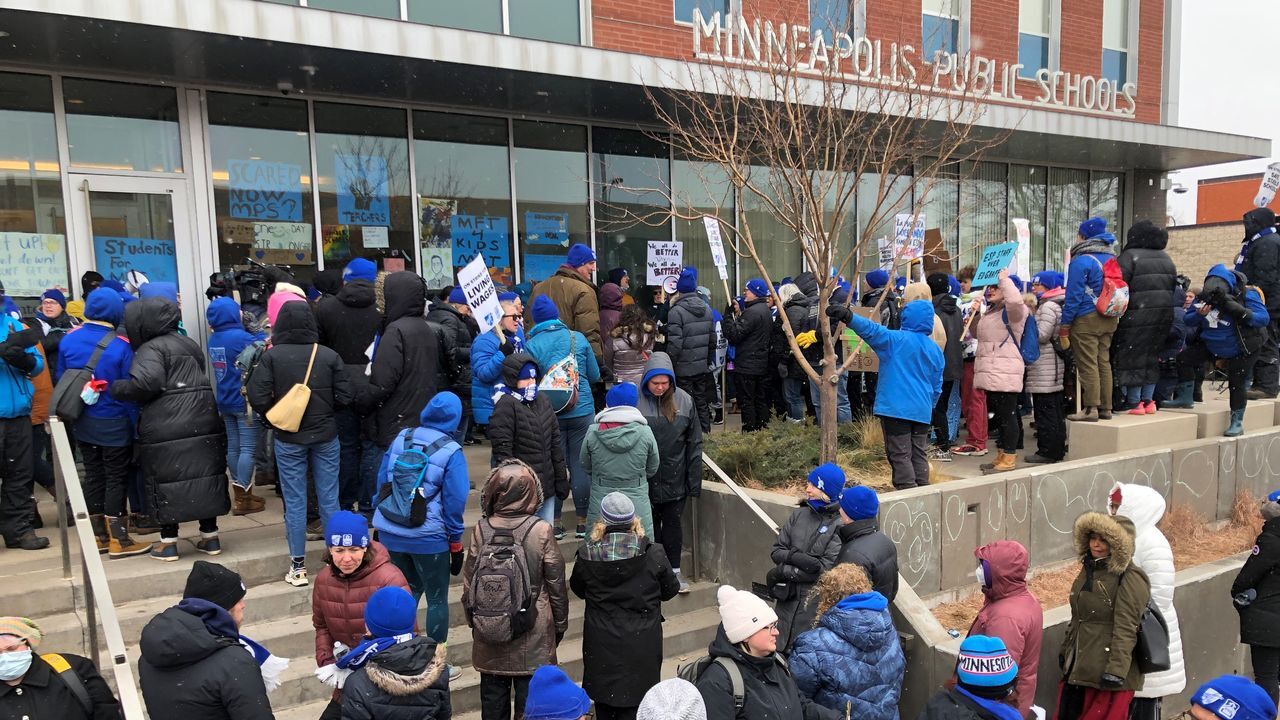 MFT members gather Friday, March 25, 2022 on the heels of a tentative agreement with the district. (KSTP/Jim O'Connell)

He also touched on the district meeting with members of the bargaining team at 10 a.m. Friday, saying they will go through the scenarios regarding the end of the school year, adding it will affect other groups as well, such as transportation.

Once those details are figured out, Graff said families will be notified of the changes.

However, he didn’t give any details as to what is included in the contracts both sides have tentatively agreed to, saying before those details are released, the union has to vote to approve the contracts.

Union leaders say the contracts include what they call “important wins” for students and schools, and that major gains were made when it comes to pay for educational support professionals, protections for educators of color, class size caps and mental health support.

According to Graff, negotiations started Thursday, and said there was “a lot of progress and momentum with teachers, and then switched gears to ESP group. Then about 3 a.m., things just kind of came together – had an agreement with the teachers around 3:30, and an agreement with ESP around 3:40.”

Graff went on to say the proposed contract will require the district to look at their budgets and make some adjustments.

Negotiations have been held virtually over the past few days, and the teachers union told 5 EYEWITNESS NEWS they were hopeful more movement would be made on their requests.

Shaun Laden, president of MFT’s ESP chapter, said during a news conference Friday that the union had reached agreements with district officials on raising pay for ESPs, stating hourly rates would go up roughly $4 per hour and that they are closer to a union goal of a $35,000 starting salary benchmark for teachers.

“The collective action of our members has shown that strikes work,” Laden said. “We know that we needed fundamental change in Minneapolis Public Schools and that was a big part of what this is about.”

Greta Callahan, president of the union’s teachers chapter, said, “We know that we have historic wins and our students have more mental health supports, that we have huge wins for education support professionals.”

Callahan went on to state, “We are so happy and so grateful to be here with community, with our families, with each other, and to get kids back in school and this is a historic day, this is a historic fight. We can’t wait to move forward and continue to get more for our students.”

The district said earlier this week they had what they called their last, final and best offer on the table. That deal included priorities the union had been asking for, such as smaller class sizes, higher wages and social workers in each school.

Here’s a recap of notable dates throughout the past few weeks related to the strike, as well as Minneapolis Public Schools.

Monday, Feb. 14 – A strike authorization vote is held, and lasts through Feb. 17.

Tuesday, March 8 – The strike begins, despite negotiations being held in the days leading up to the strike.

Wednesday, March 16 – Josh Pauly, a member of the MPS Board of Education, announces his resignation. The reason behind his resignation wasn’t provided, but was effective immediately.

Thursday, March 17 – MPS announces its Senior Human Resource Officer Maggie Sullivan will be leaving at the end of the month. The reason for Sullivan’s departure wasn’t given by the school district.

Sunday, March 20 – MPS says it has made its final and best offer for ESPs.

Friday, March 25 – Both MPS and MFT members announce a tentative agreement has been reached, but a ratification vote is still needed. Voting is expected to be held sometime this weekend.

In addition to negotiating with teachers, the district also worked with members of Service Employees International Union Local 284 to reach an agreement. The union members include food service workers who work for the school district. A tentative agreement was reached on Thursday, March 17, two days after union members filed a 10-day strike notice. Union leaders announced that day members would vote on the tentative agreement in early April once the district returned from spring break.

Teachers with St. Paul Public Schools nearly began a strike at the same time as Minneapolis teachers, but reached a contract agreement the night before the strike was supposed to begin.