This weekend, Minnesota and the nation are reacting to Kyle Rittenhouse’s acquittal of all charges.

The 18-year-old was charged with shooting three men — two of them fatally — during protests in Kenosha, Wisconsin, in August of 2020.

"If they don’t get no justice, we don’t get no peace,” protesters chanted, while marching in the streets of downtown Minneapolis.

Carol Yvonne Lewis of south Minneapolis was among the hundreds marching. 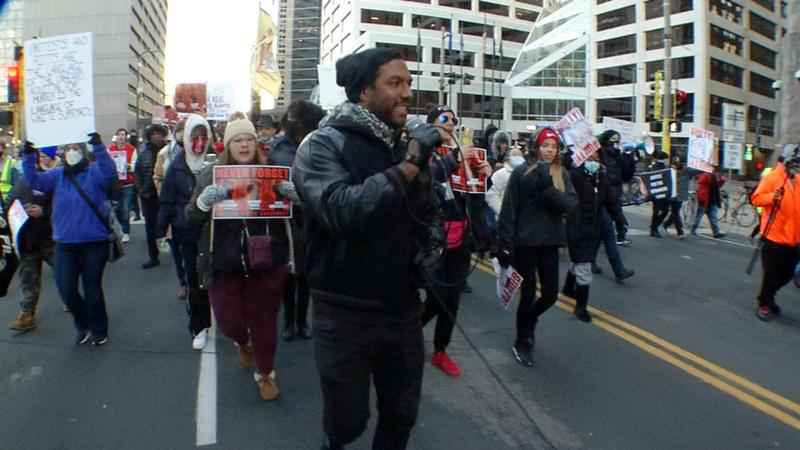 "It’s time to see people’s humanity and people’s non-humanity,” said Madeline, a Minneapolis resident. “He had no humanity when he came in with his AR-15 and shot people."

Rittenhouse was charged with homicide, attempted homicide and charges for recklessly endangering safety.

He claimed he acted in self-defense when he shot and killed Joseph Rosenbaum and Anthony Huber — and wounded Gage Grosskreutz — during the protests that erupted after a white officer shot Jacob Blake, a Black man.

Rittenhouse was acquitted on all charges Friday.

The verdicts sparked protests in Portland, Oregon and New York City, as well.

But groups of Rittenhouse supporters have also appeared on the streets.

"Kyle got in over his head, he might have been foolish to be in that situation in the moment,” says Michelle Darnell of Washington state. “At the end of the day, he still had the right to self-defense at that moment."

Rittenhouse had traveled from Illinois to Kenosha, where the protests were underway in August 2020.

He said he was there to help protect property — carrying an AR-15 style rifle.

"He had as much right to be there as anyone else,” says Mark Richards, Rittenhouse’s defense attorney. “And when Mr. Rosenbaum attacked him and then the mob came after him, he protected himself, and that’s legal in the state of Wisconsin and most places in the United States."

One of the acquitted "recklessly endangering safety" charges involved Rittenhouse firing at an unknown person trying to kick him.

“I think we’re all in shock,” John Huber says. “We did not expect this. This was just adding insult to injury.”

Protesters in Minneapolis say they believe if Rittenhouse had been a man of color, the verdict would have turned out differently.

D.J. Hooker — marching in Minneapolis — worries the verdict will embolden others.

"I’m here because justice wasn’t served,” he says. "All it does is give a green light to white supremacists that they can show up to BLM protests and even if it’s not in their community, they can shoot and kill people and claim it’s in self-defense."

ABC News is reporting Rittenhouse and his family has left Kenosha.

Experts say despite the not guilty verdict, he could still face legal consequences — including wrongful death lawsuits from the families of those who were killed.