City leaders in Minneapolis laid out plans Thursday for addressing the rise in violent crime across the city.

"It’s up to us right now to come forward, not just with words but with clear actions," said Mayor Jacob Frey.

Homicides are up 15% from last year and are 86% higher than the 10-year average.

There have been 92 homicides in Minneapolis so far this year, nearing the city’s all-time record of 97 homicides in a single year, set back in 1995. 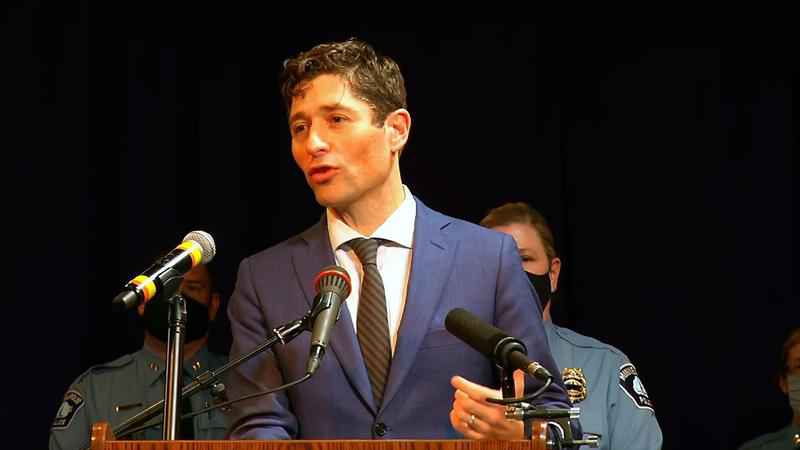 Minneapolis Mayor Jacob Frey speaks at a news conference Thursday, Dec. 16, 2021, at Shiloh Temple to address the city's response to a recent uptick in violent crime.[KSTP]

He noted a "tragic trend" of teens involved in recent violent crime, saying many are repeat offenders.

"Seventy-five percent of the arrests that have occurred are, in fact, recidivism," Frey said. "Thirty-nine juveniles have three or more arrests."

Minneapolis Deputy Police Chief Amelia Huffman added, "We are at an inflection point where we need to be very diligent and very smart about not casting a wide net, not painting with a broad brush, but using data to identify the kids who are at the highest risk because they are already down the pathway, well involved in violent crimes. Make sure that we’re providing meaningful interventions to change the circumstances of their life."

During Thursday’s news conference, 5 EYEWITNESS NEWS asked what the city will do differently moving forward.

Katie Blackwell, an inspector for MPD’s 5th Precinct, said the department is doubling or tripling patrols in crime hotspots and collaborating with other law enforcement agencies across the metro — including Edina and St. Louis Park — on investigations.

The mayor said the city will also renew partnerships with community groups to try and prevent violence out on the streets.

He noted city leaders will meet with organizers of the 21 Days of Peace movement Friday morning to talk about logistics for expanding resources.

The mayor also talked about the importance of attracting new officers to the Minneapolis Police Department at a time when the force is down by about a third.

"They need to get paid more so that we are, in fact, incentivizing the best possible talent to come to our police department and stay here," Frey said.

"We got nine people shot over the weekend, so while everyone’s chilling, my work doesn’t stop," said Jalilia Abdul-Brown, executive director of Change Starts with Community. "We need to go another direction of being proactive versus reactive."

When pressed on how the city will divert youth from crime, the mayor responded by saying the city’s budget will invest $2.6 million in youth recreation programs next year.