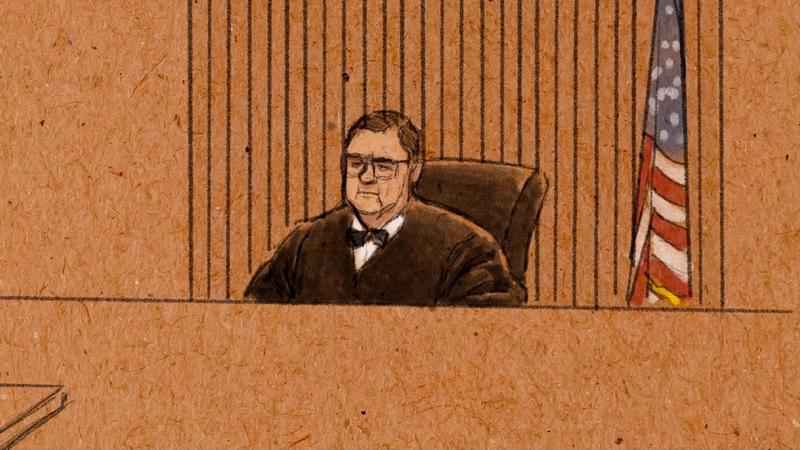 In this courtroom sketch, U.S. District Judge Paul Magnuson presides over a pretrial hearing for three former Minneapolis officers charged in the death of George Floyd, in federal court on Tuesday, Jan.11, 2022 in St. Paul, Minn. Floyd died in May 2020 after Derek Chauvin pressed his knee against his neck as Floyd, who was handcuffed, said he couldn't breathe. Tou Thao, J. Kueng and Thomas Lane are charged that they deprived Floyd of his rights while acting under government authority. Thao and Kueng are also charged with willfully depriving Floyd of his right to be free from unreasonable force by failing to stop fellow Officer Chauvin from pressing his knee into Floyd's neck.[Cedric Hohnstadt]

A coalition of media groups says restrictions on access to the federal civil rights trial of three former Minneapolis police officers charged in George Floyd’s death amount to an unconstitutional closing of the courtroom.

Citing the risks of the pandemic, U.S. District Judge Paul Magnuson has restricted the number of people who may be in his courtroom for the proceedings against Tou Thao, J. Kueng and Thomas Lane on charges that they deprived Floyd of his rights while acting under government authority. Jury selection begins Thursday. Magnuson has also restricted how much can be seen on a closed-circuit feed of the proceedings, which will be relayed to overflow rooms where only a limited number of journalists and members of the public can watch.

In keeping with longstanding federal court rules, the proceedings will not be livestreamed or broadcast to the public, in contrast to last year’s murder trial in state court of Derek Chauvin, the white former Minneapolis officer who kept Floyd pinned to the pavement with his knee on the Black man’s neck despite Floyd’s pleas that he couldn’t breathe. The judge in that case made an exception to the state’s normal limits on cameras, citing the need for public access amid the pandemic.

“We do not need to explain to this Court the gravity of the trial, the impact Mr. Floyd’s death had on the Twin Cities and the world, or the public’s ongoing and intense concern for how the criminal justice system deals with those accused of killing him," the news organizations, including The Associated Press, said in their letter dated Monday. "As a result, ensuring the trial … is open to the press and public is imperative.”

Two media members are to be allowed in the courtroom during jury selection. The media coalition — which includes KSTP’s parent company, Hubbard Broadcasting — pointed out that no members of the public will be allowed for that phase, not even members of the defendants’ families or the Floyd family.

During the trial itself, only four reporters and a sketch artist will be admitted, plus some family members, but nobody from the general public. Seating in overflow rooms for the media and public will be limited to about 40 apiece. Spectators in the overflow rooms will watch via monitors that will provide only limited views. Trial exhibits won’t immediately be made public.

“It is in the best interest of all involved for the media coverage of this trial to be fair and accurate and to enhance public understanding of the federal judicial system, including understanding of how juries reach their verdicts," the groups wrote. "The best way to ensure such coverage is to provide to the media unfettered access to the trial and the evidence it involves.”

Magnuson “has tried to accommodate the interests of the media and the public, but as the letter says, he needs to try harder,” said Jane Kirtley, director of the Silha Center for the Study of Media Ethics and Law at the University of Minnesota, which is one of the 18 groups that signed the letter.

Kirtley said the recent state court trials of Chauvin, and of former Brooklyn Center Officer Kim Potter in the shooting death of Daunte Wright, showed that cameras aren’t disruptive and don’t violate the privacy interests of witnesses or jurors.