Kyle Lindstrom works out nearly every day at 6:30 in the morning with a close-knit group of friends at the CrossFit City of Lakes gym in Golden Valley. But no one there expected to be brought closer together in their friendships after what happened at their workout on May 25.

But, that’s exactly what happened when the 38-year-old Lindstrom collapsed during the daily workout and suffered a heart attack.

“No one knew what happened at first, and I only remember becoming a little faint at the time,” Lindstrom said. “But I feel very fortunate that things turned out the way they did because it sure could have been a lot worse if not for those who helped.”

Golden Valley Assistant Fire Chief Bethany Brunsell, who also happens to be a family member of a Hubbard Broadcasting employee, told 5 EYEWITNESS NEWS that even though she was off-duty at the time, her first-responder training kicked in immediately. She started by grabbing an automated external defibrillator off the wall and using it right away. 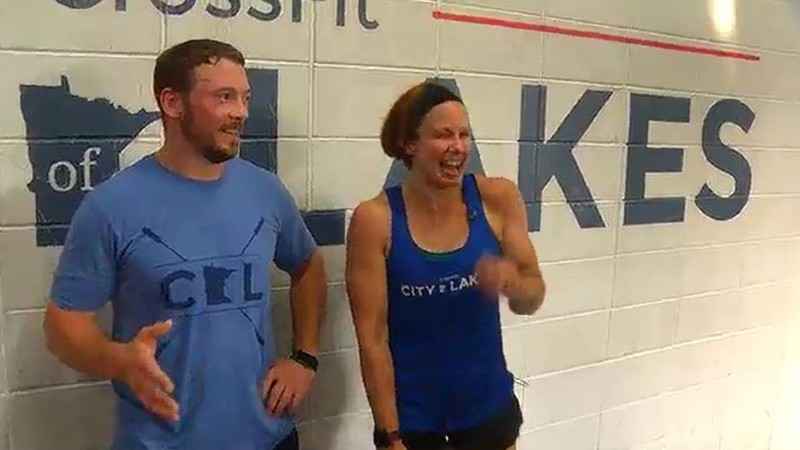 Kyle Lindstrom, left, stands with Bethany Brunsell during a workout at CrossFit City of Lakes Gym in Golden Valley.[KSTP]

“It’s the great thing about the skills as a first responder that it’s not just on-duty that you use those skills,” Brunsell said. “We’re able to translate those skills when we are off-duty into something that can actually save a friend’s life during an emergency.”

Simon Akerman, a licensed cardiology pharmacist, started chest compressions as Brunsell prepared to use the AED.

“It took a little while after everything happened for it to sink in for me while I was at work, and I was very distraught over the whole thing,” Akerman said. “But I was extremely happy and grateful about the outcome because when he had no pulse, effectively he was not living at that moment. And to see him alive and recovered from this is really nice.”

Lindstrom said his doctors found two blood clots in one of his main arteries and those were treated, and he is now cleared to resume normal activities because, he said, “doctors did not find any other problems with my heart.”