In cases of cardiac arrest, seconds matter. According to the American Heart Association, fewer than 8% of people who suffer cardiac arrest outside of the hospital survive.

A month later, on Friday, Aug. 21, he suffered a second cardiac arrest while he and his wife, Ruth, were on their way to Cross Lake.

He was behind the wheel of their SUV as they traveled on Highway 196, near Mille Lacs Lake. 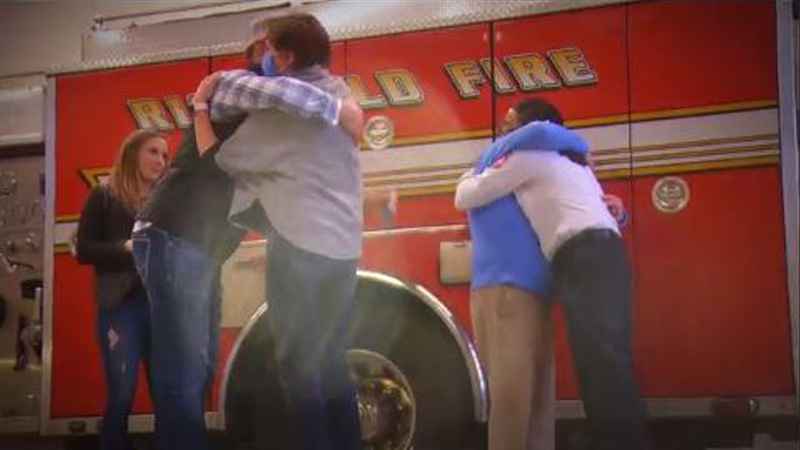 “It all happened very rapidly,” Kewitsch said. “I got very lightheaded and everything just went gray and went down to a pinpoint, and that’s the last thing I remember.”

“I saw Wayne was unconscious behind the wheel and a lot of thoughts went through my head real fast but the first one was ‘he’s in cardiac arrest’ because I witnessed his first cardiac arrest on July 1 in our home,” she said. “So I, with God’s help I think, grabbed the wheel and steered right, said a little prayer and we landed in a cattail swamp about 40 feet in […] I was just like, ‘I need to get off the road because I don’t want to hurt anyone else.’”

New device part of ‘bundle of care’ saving lives during cardiac arrest in Minnesota, across country

At the same time, Emily and Matt Roeder were on their way north to spend time with Emily’s cousins. They left later than expected, after stopping a couple of times, including for coffee.

“There was an SUV in front of us […] the next thing we know, we watch the car slowly drift off the road onto the road approach, went airborne and into the swamp,” Emily Roeder said. “I just looked at my husband and said ‘you need to pull over,’ like something is seriously wrong. Before he was even stopping the car, I was getting out and telling him to call 911 and running through this swamp.”

Emily is a registered nurse at Mercy Hospital in Coon Rapids.

“When I got down to the car, the driver of the car was sort of slumped down in the front seat,” she said.

Ruth told Emily she believed he was in cardiac arrest.

“I knew he needs chest compressions, he needs them and he needs them now,” Emily said. “The unfortunate thing was we were in the middle of a swamp, where do you do check compressions? So I just kind of looked at the situation and said, ‘Well, I’m going to do them right here.’”

She lowered the front seat and performed hands-only CPR.

“It was a gift from God,” Ruth said. “I was like ‘You go girl!’ because she just took over the scene, she ran it, she knew exactly what she was doing and she kept saying to me, ‘breathe, breathe.’”

Up on the road, Matt had immediately called 911.

“I stayed up on the road to try to flag everybody down,” Matt said. “It was scary too because being on the phone with State Patrol, all I could tell them was, ‘You guys need to hurry up.’ I could see through — they had the back hatch open — I said, ‘You guys gotta hurry up, I can see them doing compressions on this person.’”

“We had Tribal officers on scene, we had sheriff’s deputies on scene […] the vehicle had left the road and was actually in a ditch in about two to three feet of warm mucky area, which means you had no really firm surface to stand on,” Fronk said. “In my case, 32 years of service kicks in and realizing it’s a team effort, I assume compressions on this patient, not knowing who it was.”

“Ruth said ‘This is Wayne of Richfield Fire,’” Fronk explained. “Once you realize this is somebody you have trained with, been at conferences with, chatted with, the care of this patient — we do good care on any patient — but this turns out to be a brother or sister in the fire, EMS, emergency management world and you just get so focused on providing good quality care.”

Together, they worked to save his life and used the AED to shock him several times. Wayne said he was in cardiac arrest for about 15 minutes before he was revived.

“I relive it a lot,” Ruth said. “I was planning his funeral at one point, how do I get his body home? And seven shocks were bad […] to see him just lifeless, and I was holding his hand, unless they were shocking him, of course. I wouldn’t want anyone to go through it.”

She stayed by his side as first responders removed him from the SUV and brought him through the swamp to an ambulance on the side of the road.

When they reached the hospital in Onamia, Wayne was airlifted to the University of Minnesota Hospital where he received care following his first cardiac arrest in July.

Within a day, he was on the phone with Fronk.

“Especially when we have patients who are guests in our area or visitors, we don’t get, a lot of times, an idea of the outcome, especially if it’s a positive outcome,” Fronk said. “For myself, to get that call on Saturday from Wayne thanking us that he was still with us is one of the rarities because time and distance for us in rural Minnesota and Tribal nations is the challenge we face.”

“The first big hug, you could just feel the love,” Matt said. “Now, you could say we have two new great friends.”

They all gathered together at the Richfield Fire Hall to share their story with 5 EYEWITNESS NEWS.

“I’ve known Monte for about 15 years and, when he walked into the station this afternoon, it was really an emotional experience,” Wayne said.

Ruth added, “And Emily and Matt are just a godsend, they’re our guardian angels.”

“For me to see and be able to thank them personally is incredible,” Wayne said.

It was the first time since the event that he and Fronk had seen each other.

“The teamwork and the right people were there at the right time and he is here with us today, and that is an amazing story and an amazing gift that I think all of us that were there on scene will put that on a shelf and say, ‘This was a good day,’” Fronk said.

They hope this encourages others to learn hands-only CPR. The American Heart Association reports effective, immediate bystander CPR can double or triple a cardiac arrest victim’s chance of survival.

“I feel so fortunate I knew what to do and how to act,” Emily said. “Don’t be afraid to help somebody because you never know who it could be and whose life you can make a difference in.”

The Minnesota State Patrol presented Emily with a Meritorious Citizenship Award on Wednesday.

Col. Matt Langer said during the virtual ceremony, “Due to the remote location of the crash, it’s unlikely he would’ve survived had it not been for Emily’s quick actions, in this case, saving the life of a fire chief."