The sound of bagpipes echoed across Fort Snelling National Cemetery.

An emotional hail and farewell.

"He was really such a young person when he died," said Cailey Hansen-Mahoney, Melville’s great-grandniece. "I think it’s so important that the military makes sure that all of its dead are given a proper burial." 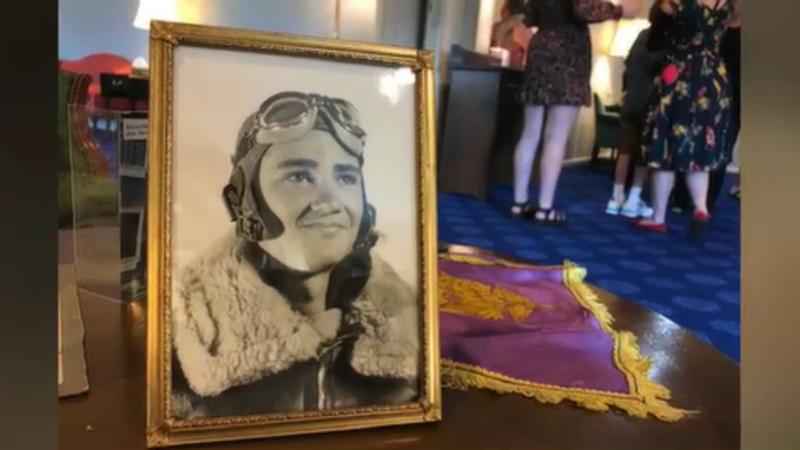 A long and difficult journey for the fallen pilot, and his family.

"There’s just a hole where he should have been, and he was lost," Kari Hansen, Melville’s great-niece, declared. "The sadness of that contrasted with the joy of finding him, and celebrating him, and honoring him, and having him back."

Melville’s burial comes after 77 years of questioning, uncertainty and sadness for those who loved him.

We asked if today brought closure to the family.

"Definitely," Hansen-Mahoney said. "I mean, It’s always been a family legend I’ve been hearing about, Uncle Billy and his missing plane in New Guinea since I was a little kid."

This World War II story of love, loss, and recovery began when Melville was 20 years old, fighting far from his home in Minneapolis.

"He arrived in Australia in mid-summerish of 1943, as a newly trained pilot, and they were doing combat patrol missions," Hansen recalled.

Those patrols, half a world away, were over New Guinea, just off the Australian Coast.

The then-island territory was considered the scene of some of the most horrific fighting in the war.

Melville and two other pilots went missing in the middle of a violent tropical rainstorm.

"He and three other planes went out on a combat patrol mission, on Oct. 28, 1943, and three planes never returned out of the four," Hansen said.

"They were hit with bad weather and three of them crashed," Massie added.

"They did searches the next few days," Hansen said. "They couldn’t find any remains for the other three pilots that went out. He was in a solo plane, a P-39 air cobra, and he was never found."

Thus began a series of searches, including reconnaissance missions, that started during and after the war and continued for decades.

The years went by with no trace of Melville or his plane.

"I worked with the Defense Department and the POW-MIA accounting agency. Got in touch with them, send them many letters and asked, please look for my — please look for William," Massie noted. "I was pushy about that because I knew he was there. It’s been 75 years then, and now it’s when he was actually identified, 77 years."

Massie says she was helped in that effort by the family of Francis Pitonyak, of Detroit, another pilot from Melville’s fighter group who was also lost.

Pitonyak’s remains were recovered in July 2016, a family member says, after a seven-year lobbying effort to continue the search.

He was buried in September 2017 at Arlington National Cemetery.

Massie says the discovery of Pitonyak’s remains led to a renewed push to search for Melville.

“Frank’s family member contacted me and said let’s see if we can’t repatriate William,” she explained. “So that was two-and-a-half years ago.”

Then, on June 3, 2019, a recovery team searching the area around Pitonyak’s crash site made a startling discovery.

"Some different objects, they found a belt buckle, and they did find his machine gun with the matching serial number and then, of course, there was some ossified remains," Hansen said.

"They dig, and he was probably buried 8 feet underground… they put the earth on a screen, and put a hose over it, and the soil will go through and anything that’s remaining," Massie added. "They had a bit of the skull, they didn’t know at the time, but they called it osseous and other remains."

Just a few bone fragments, the family said, but enough for DNA testing.

"When they found remains, then I was asked to give my DNA, they sent me a little tube, I put in my spit," Massie said. "They also wanted a male person."

In July 2020, a military spokesperson confirmed the remains were Melville’s.

"He called me and he gave me the news on the telephone, and I cried," Massie said quietly.

On Thursday night, Melville’s extended family, some from as far away as California and Georgia, gathered at a south Minneapolis funeral home.

There, they honored his life and got close-up looks at his uniform, his medals — including a Purple Heart — photos from the war years, and even his letters home.

Hansen-Mahoney and other family members in their 20s read those letters out loud to a rapt audience.

"Today I was flying in formation and on the takeoff, I started to skid. Almost chewed off the lead ship’s tail," one said.

Another: "I’ll be back home when it’s all over and starting to live a normal life again."

"I think the most powerful thing for me is that when he passed away, he was 20 years old and I’m 20 right now," Hansen-Mahoney said. "He talked about all the things that I’m thinking about. I want to buy a car, I’m thinking about getting married someday. I want to settle down."

The arc of Melville’s life touched several generations of his family.

"I was born in 1942, and he was killed in action in 1943," Massie said. "We never knew Billy but we got to know him through the pictures we have and by the letters we found in the trunk that my grandmother, his mother, had saved."

During the burial service, there was silence, except for the mournful notes of "Taps" playing.

Then, finally, a flyover in the missing man formation.

"I feel sad that my mother and my grandmother, who grieved a lifetime for their son, for the only son in the family," Massie said. "I just wish they were here, but maybe they know."

He was no longer one of the more than 72,000 Americans who served in World War II who remain unaccounted for.

"I just pray that more families can find closure like we have and are able to honor their departed as we are," Hansen-Mahoney added.