It’s a welcome respite, in our masked-up world.

“It’s winter, it’s cold, I mean, people are looking for something to do today,” declares Tim Schloe, the organizer of the Twin Cities Record Show. “We’ve had a lot of time to spend at home, so a lot of people took this opportunity to start collecting records.”

The buy and sell trade show, at the Able Brewery in northeast Minneapolis, turned out to be a popular event on a snowy Saturday.

“Just trying to start the collection strong,” says Lawson Ramuta, from St. Louis Park. “Just like when that needle hits the record, especially with a lot of these older records, it just sounds a little different.”

Vinyl fans in the metro are not alone. 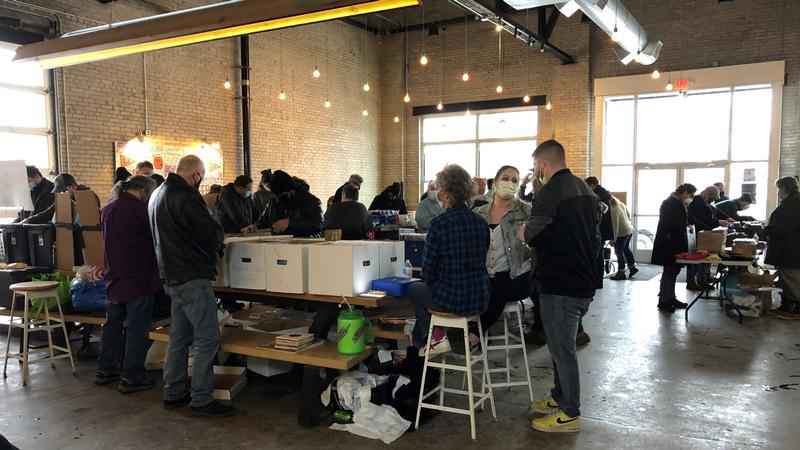 The Recording Industry Association of America says nationwide, vinyl sales rose 51% in 2021 — beating out sales of CDs for the first time in decades.

The association’s latest figures show more than $620 million in sales.

“It was just fun to see if they have anything here I could grab,” notes Sandy Schell, from Shakopee. “I was interested in coming here because I just watched the Beatles documentary and it just reignited finding more of that, the Beatles albums.”

There was, of course, many-a-glass raised here — but most say vinyl was the big draw.

"The pandemic has actually brought more people into record collecting than it’s been for a long time,” Schloe says. “They enjoy the larger size, they can read the liner notes, and get all that information. It’s more of an active experience because you’ve got to actually listen to the record, flip it over.”

We found Steve Isadore flipping through stacks of 45s, carefully looking them over for scratches or other damage.

"The tactile feeling I guess and just watching it spin on the turntable and it’s kind of fun,” he smiles.

This show has a little bit of everything, from Devo-hat-wearing vendors to legendary names in rock history emblazoned on tee shirts and album covers: The Ramones, Warren Zevon, Pat Benatar, Led Zeppelin, and of course, Bob Dylan, among many others.

"This is just decades-old records and they last forever,” Schell says.

She adds, maybe there’s a bit of yearning here, too.

"It’s finding something you’re looking for, you haven’t thought about that band in 10-20 years,” she adds quietly. “It takes you back to those memories of your childhood and growing up, so it’s a little bit of nostalgia."

For others, the show is just the start of a musical journey.

Ramuta and his friend Lizzie Thoofe weren’t even alive when album sales started taking off during the 1970s.

"I had just gotten him a record player for Christmas,” Thoofe notes. “So we’ve been just hopping around record stores trying to find as many as we can to start the collection.”

Their picks: Steely Dan’s greatest hits, plus some Dylan and Van Morrison.

What looks like just the start of a vinyl love affair.

"We have one, two, three of the ones that we need to get,” Thoofe grins. “Then every time we go to a concert we’re adding to the list of records we need to get so just see if we can find anything on the list.”

Some of the albums sold are years or even decades old— but Isadore says he doesn’t mind any audio imperfections.

They remind him of his own journey.

“As opposed to downloading or digital media, it’s just kind of old-time, I guess,” he says. “There’s some cracks and pops — it’s a little bit warmer. Truthfully, my ears are kind of wrecked from playing drums for 45 years, so I probably can’t hear it. I think it is a little bit different sound, though.”