“It was meant to be.” A very special equine friendship on display in the west metro.

It’s an unlikely friendship at the Horseplay Ranch in Corcoran.

On the one hand is Ty, a 10-year-old rescue horse who is sightless.

His new best friend is Tiptoe, a 10-month-old seeing-eye donkey.

“The moment Tiptoe was put in the pen with him, they’ve been, it was obvious at the moment it was meant to be,” declared Kym Garvey, operator of the Save the Brays Donkey Rescue. 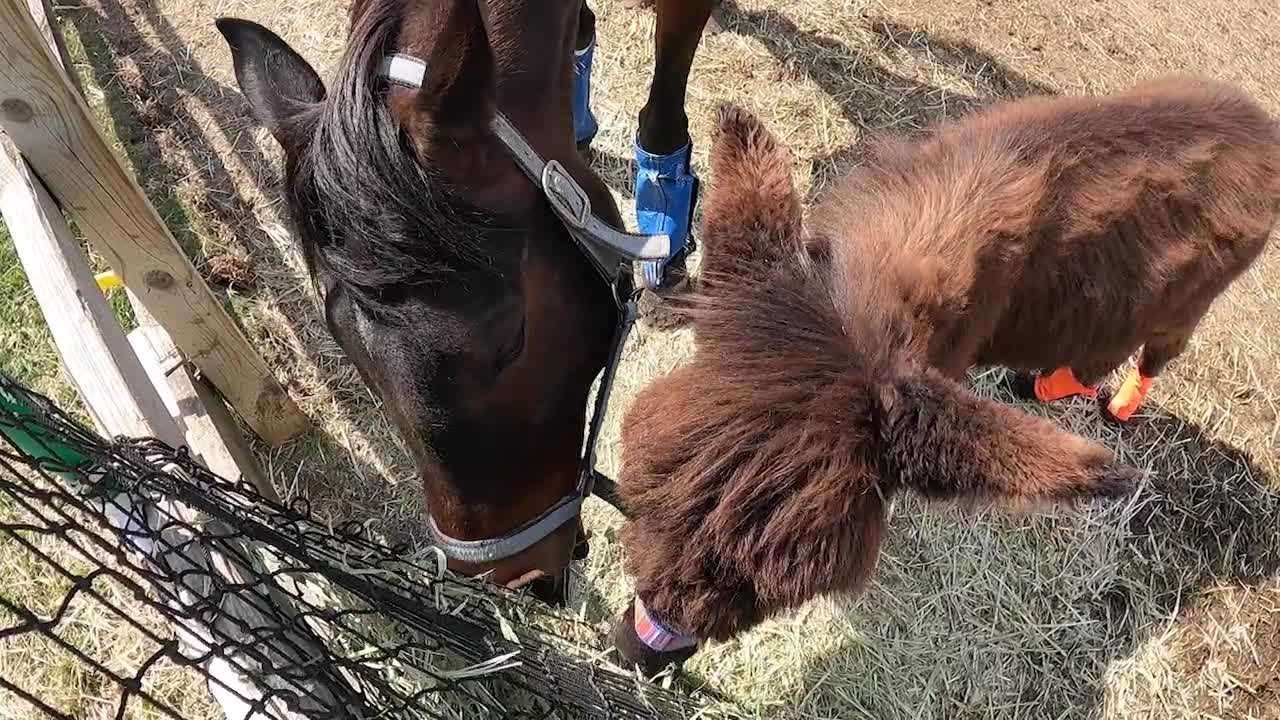 It’s not always been an easy life for Ty.

He’s been treated for chronic eye inflammation and cataracts.

One of his eyes has been removed, and the other is to be taken out soon.

Recently Erin Larson, Ty’s owner, and Brockman spotted a social media post by Garvey about how Tiptoe — an orphan previously named BJ — had recently lost a furry friend and needed some companionship.

“We average between 55 and 60 donkey (rescues) at any one time throughout the year,” Garvey noted. “They saw that social media post and reached out to see my thoughts on Tiptoe partnering with the horse here.”

Experts say donkeys and horses can get together for therapy or other reasons.

But the question here was, would Ty and Tiptoe get along? Even become friends?

A week ago Wednesday, there was an introduction of sorts, with the two equines taking part in a nose-to-nose meet and greet.

“I was worried about the size and difference,” Garvey recalled. “Tiptoe is really small. He’s easier to push around.”

But the humans needn’t have worried.

“They started grooming,” Brockman said with a grin. “And it’s like, Ty knew this little dude was for him. And BJ, right away, he had a bell on, and he followed him around. So he’s basically his seeing-eye donkey. It’s Ty’s eyes now, and he gets the job.”

A bell around Tiptoe’s neck lets Ty know exactly where his burro buddy is.

But maybe there’s something more here.

“Animals understand so much more than we realize or give them credit for, and it’s as if Tiptoe knows that there’s something different about Ty,” Garvey explains. “They can just sense that through different waves we can’t understand.”

“We had a feeling and the signs,” Brockman says. “So sometimes you just have to believe it.”

Two equine pals who could maybe teach us humans lessons in friendship and kindness.

You can find out more about Save the Brays Donkey Rescue here.