More than 100 children with conditions such as cerebral palsy have seen "remarkable" improvements in motor skills, thanks to an innovative therapy program at Children’s Minnesota.

Constraint-induced movement therapy involves putting a cast on the child’s stronger arm for four weeks so they are forced to use the weaker one.

Grinde recently published a national study on the outcomes of constraint therapy after following 19 children, ranging from 14 months old to 6 years old. 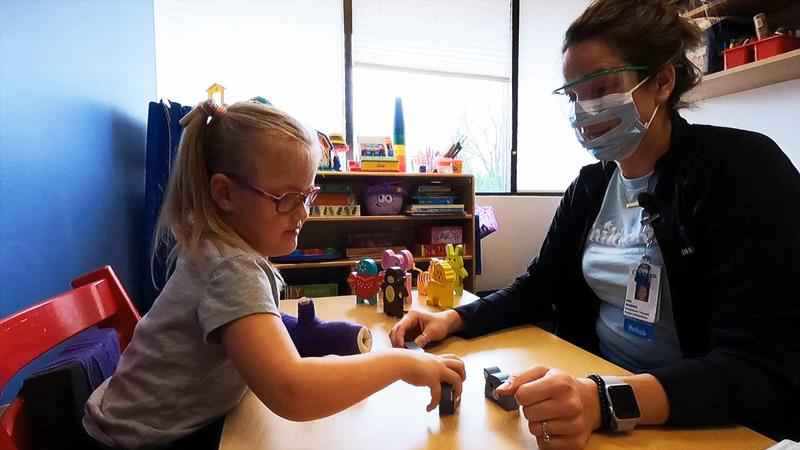 Kids enrolled in the full program at Children’s Minnesota do six hours of intensive therapy every day for four weeks while wearing the cast.

"The changes that they would make in one month would be equivalent to having therapy for a year or more," Grinde explained. "It really is life-changing for these kids."

Grinde said the therapy originated in Alabama. She brought the program to Children’s Minnesota after witnessing the improved outcomes and decided to start her own study on it.

"The full program is very rare throughout the country. We’re one of the few across the United States that I’m aware of still who does the full program, so we do get people coming from other places just for that," Grinde said.

5 EYEWITNESS NEWS visited the Children’s Minnesota rehabilitation clinic in Minnetonka on Monday to see how the therapy works.

Five-year-old Brinley Arvidson of Alexandria was there working with an occupational therapist on fine motor and gross motor skills as part of the program.

Her mother, Nicole Arvidson, said her daughter suffered two brain bleeds after being born 10 weeks premature and was diagnosed with quadriplegic cerebral palsy.

She said the 5-year-old has never been able to use her right arm.

"Basically, she needs to learn she has a right arm," Nicole Arvidson explained. "Her right arm would just dangle and sit by her side or she would drag it when she would crawl or it would get stuck behind her. It was like she didn’t have any feeling in it. Nothing."

Brinley is now in the fourth week of constraint-induced movement therapy. Her mother said having her left arm in a cast has made a huge difference in Brinley learning to use her right arm.

"It’s crazy. Just casting that arm forced her to use the one that’s weak and really makes those brainwaves and remapping of her brain come to life," Nicole Arvidson said.

She said her daughter is now able to complete daily tasks, such as putting a cap on a marker and folding clothes, noting those were things she never thought Brinley would be able to do.

They also offer a modified program that involves less of a time commitment from families.

Grinde said her study showed the improvements kids make in therapy tend to last over time.

"Previously, if we had been working with them in weekly therapy and they were a couple years old, we’d be like, ‘OK, if they’re not using that hand that much, that’s kind of where they’re going to be.’ But now we’ve learned there’s a whole new outlook for those children," Grinde said. "It’s thrilling to be able to see the changes the kids make in the end."