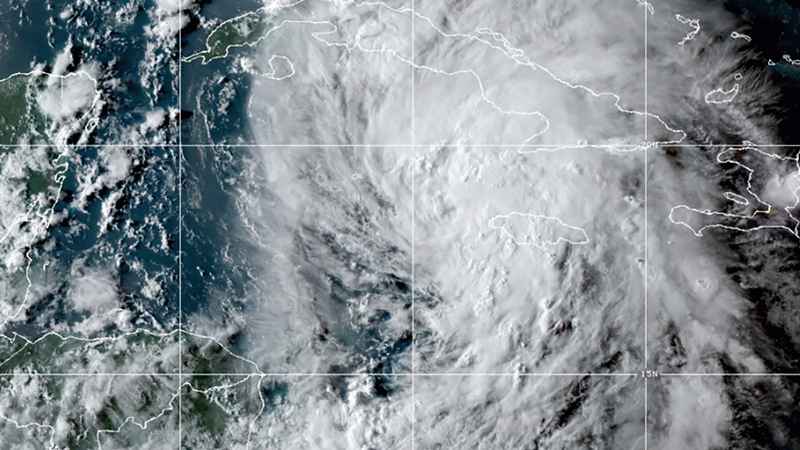 This OES-16 East GeoColor satellite image taken Thursday, Aug. 26, 2021, at 10:20 p.m. EDT, and provided by NOAA, shows Tropical Storm Ida in the Caribbean Sea. Tropical Storm Ida formed in the Caribbean on Thursday and forecasters said its track was aimed at the U.S. Gulf Coast, prompting Louisiana's governor to declare a state of emergency and forecasters to announce a hurricane watch for New Orleans.[NOAA via AP]

Hurricane Ida struck Cuba on Friday and threatened to slam into Louisiana with devastating force over the weekend, prompting evacuations in New Orleans and across the coastal region.

“This will be a life-altering storm for those who aren’t prepared,” National Weather Service meteorologist Benjamin Schott said during a Friday news conference with Louisiana Gov. John Bel Edwards.

The governor urged residents to quickly prepare, saying: “By nightfall tomorrow night, you need to be where you intend to be to ride out the storm.”

In New Orleans, Mayor LaToya Cantrell called for voluntary evacuations. With the storm intensifying so much over a short period of time, she said it wasn’t possible to order a mandatory evacuation which generally calls for using both lanes of highway traffic to evacuate people from the city.

“The city cannot order a mandatory evacuation because we don’t have the time.” Mayor LaToya Cantrell said.

City officials said residents need to be prepared for prolonged power outages, and asked elderly residents to consider evacuating. Collin Arnold, the city’s emergency management director, said the city could be under high winds for about ten hours. Earlier Friday, Cantrell called for a mandatory evacuation for residents outside the city’s levee protections — a relatively small sliver of the city’s population.

Other areas across the coastal region were under a mix of voluntary and mandatory evacuations. The storm is expected to make landfall on the exact date Hurricane Katrina devastated a large swath of the Gulf Coast exactly 16 years earlier. Capt. Ross Eichorn, a fishing guide on the coast about 70 miles (112 kilometers) southwest of New Orleans, said he fears warm Gulf waters will “make a monster" out of Ida.

“With a direct hit, ain’t no telling what’s going to be left — if anything,” Eichorn said. He added: “Anybody that isn’t concerned has got something wrong with them.”

A hurricane warning was issued for most of the Louisiana coast from Intracoastal City to the mouth of the Pearl River. A tropical storm warning was extended to the Mississippi-Alabama line.

At the state’s largest hospital system, Ochsner Health System, officials ordered 10 days worth of fuel, food, drugs and other supplies and have backup fuel contracts for its generators. One positive was that the number of COVID-19 patients had dropped from 988 to 836 over the past week — a 15% decline.

Ida made its first landfall Friday afternoon on Cuba’s southern Isle of Youth. The Cuban government issued a hurricane warning for its westernmost provinces, where forecasters said as much as 20 inches (50 centimeters) of rain could fall in places, possibly unleashing deadly flash floods and mudslides.

An even greater danger will then begin over the Gulf, where forecasts were aligned in predicting Ida will strengthen very quickly into a major hurricane before landfall in the Mississippi River delta late Sunday, the hurricane center said.

If that forecast holds true, Ida would hit 16 years to the day that Hurricane Katrina made landfall as a Category 3 storm with 125 mph (201 kph) winds near the riverside community of Buras, just down the Mississippi River from New Orleans.

Katrina is blamed for an estimated 1,800 deaths from the central Louisiana coast to around the Mississippi-Alabama state line. A massive storm surge scoured the shores and wiped houses off the map. In New Orleans, failures of federal levees led to catastrophic flooding. Water covered 80% of the city and many homes were swamped to the rooftops. Some victims drowned in their attics. The Superdome and New Orleans Convention Center became scenes of sweltering misery as tens of thousands were stranded without power or running water.

Memories of Katrina still haunt many who scrambled to prepare for Ida on Friday, lining up for groceries, gas and ice, as well as sandbags that the city was offering.

Traffic snarled at entrances to a New Orleans Costco, where dozens of cars were backed up at the gas pumps and shoppers wheeled out carts stacked with cases of bottled water and other essentials.

Retired police officer Wondell Smith, who worked on the police force when Katrina hit, said he and his family were planning to stay, but were also getting ready to head farther inland if the forecasts worsened. He loaded water, bread and sandwich meat into his SUV.

“I know what that looks like,” Smith said, referring to the potential devastation. “This is my first time being home in 34 years of service,” he added. “And I want to be prepared.”

Saturday’s preseason NFL game between the Arizona Cardinals and the Saints at the Superdome was first moved up seven hours to avoid the weather, and then canceled altogether.

The hurricane center predicted the peak storm surge could reach 10 feet to 15 feet (3 to 4.5 meters) along the Louisiana coast, with a possible surge of 7 to 11 feet (2.1 to 3.4 meters) in the New Orleans area. The storm’s track put New Orleans on the eastern side — often called the dirty side — which generally sees much more significant effects than the western side.

“Being east of this storm’s track is not ideal,” said Arnold.