KSTP has team coverage today on storm cleanup throughout Minnesota. Click the video player above to watch the latest reports.

The small western Minnesota town of Forada will be starting the cleanup process after being hit by a tornado Monday.

Forada was one of the worst-hit communities during Monday’s severe weather outbreak.

The National Weather Service (NWS) says law enforcement confirmed a tornado touched down in the city, and Forada Fire Chief Stephen VanLuik there says he isn’t surprised based on what the town looks like.

“Part of the town didn’t get touched,” he said. “The other part of town there’s nothing left.” 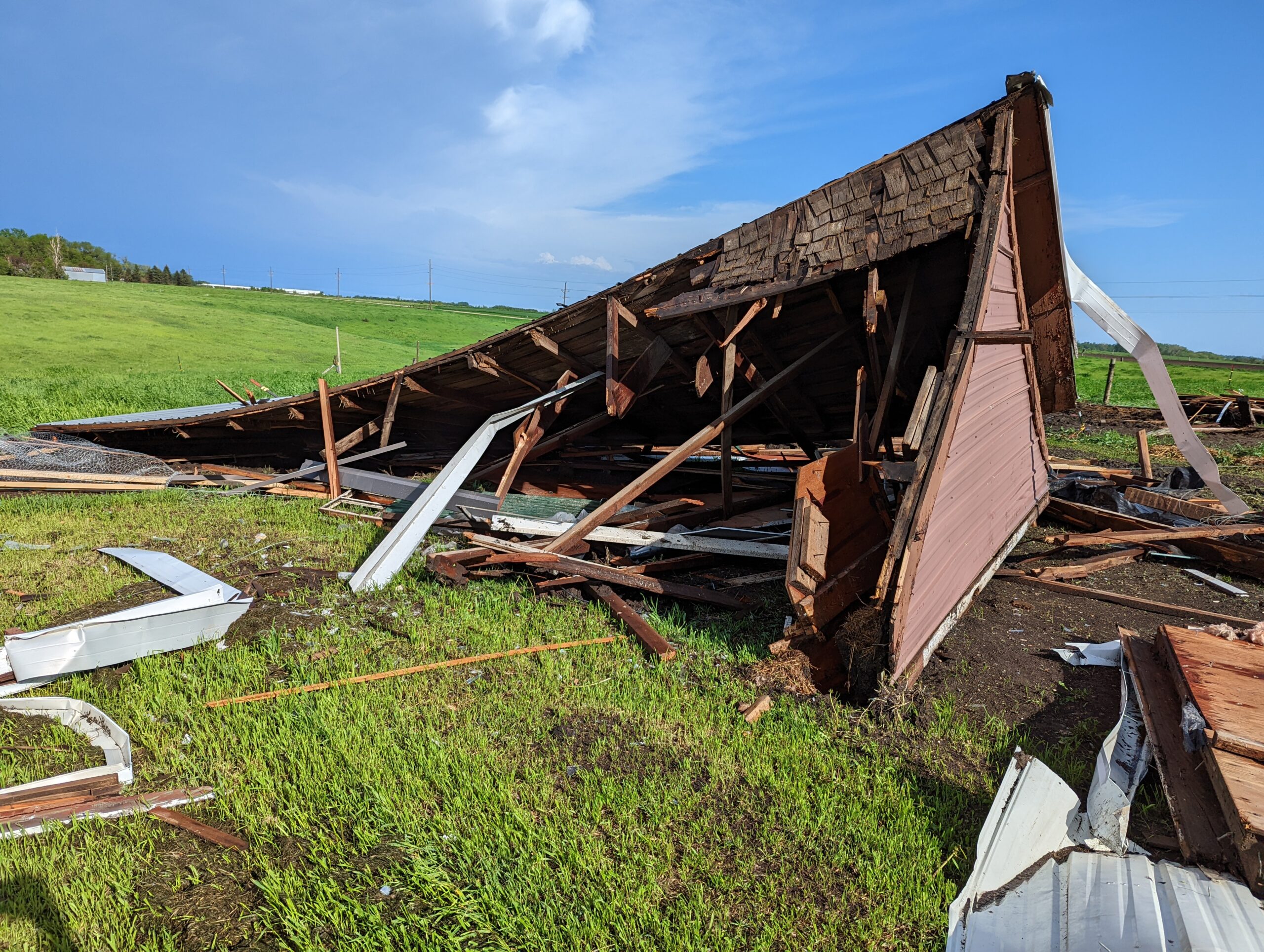 Two horses stand out of frame after an airborne shed (remains pictured above) nearly crushed them in Morris, Minnesota, according to the owner. Credit: Jacqueline Vargas

The NWS assigned an EF-2 rating to the tornado in Forada, with winds reaching 120 mph. The tornado produced “multiple vortexes” and carved a path at least half a mile wide through the town.

Video shows a path more than a mile and a half long of damaged buildings, including homes and cabins.

The storm brought high winds and heavy rain, ripped roofs and walls off of buildings, tossed boats and small buildings around and knocked trees down across the area.

Majerus-Lieser said her family got down to the basement right before the storm passed over their home.

“It was less than a minute and then it was just glass. Glass, and one second everything was gone,” she said.

Her husband, Greg Lieser, remembers feeling the rain on his shoulders while sheltering inside after the tornado ripped the roof off the home.

“It’s unbelievable,” Lieser said. “It hit — within seconds, it was gone.”

Another Forada resident, Ali Chinn, said the sound of the storm is something she can’t shake from her mind.

“It’s a horrific sound that I cannot describe — nor will I ever forget,” Chinn said. “I just hung on to my boys and my dogs and prayed that we’d stay safe.”

While her family was safe, their home suffered significant damage. Volunteers helped the Chinn family collect what they could from the scattered debris in their front yard.

“As overwhelming as this loss is, the outpouring of the people in the community — from friends to neighbors to colleagues — has been as overwhelming,” Chinn said.

VanLuik says his team has searched homes, and says no major injuries were reported. The damage from the storm limited access to areas around Maple Lake to residents and licensed contractors out of concern over flying debris.

“I’ve been on the fire department for 33 years and … first time I’ve ever seen anything like this,” said VanLuik.

As of this time, 5 EYEWITNESS NEWS hasn’t heard of any organized cleanup efforts.

In addition to Forada, viewers have submitted photos and videos of storm damage from across the state. A gallery of photos can be found at the end of this report.

Among the items submitted to 5 EYEWITNESS NEWS include a video showing what appears to be a flattened barn in Plato, just southeast of Hutchinson.

The Todd County Sheriff’s Office also shared photos from Eagle Bend of destroyed buildings, roofs torn off others and debris scattered across lawns and roads.

The NWS confirmed Tuesday EF-1 tornadoes touched down in Plato and Eagle Bend, with winds reaching 90 and 95 mph, respectively. The NWS also reported a track of tornado damage across four counties from Appleton to Glenwood, with maximum wind speeds of 100 mph.

Photos from Starbuck and Appleton show funnel clouds in the area.

As of Tuesday morning, there were roughly 38,000 customers without power, according to PowerOutage.us. You can find information regarding restoration times with your power company by CLICKING HERE.

The outage number is down from roughly 51,000 customers experiencing outages during the overnight hours.

Although power crews will have to deal with gusty winds Tuesday, temperatures will be lower than the past few days. 5 EYEWITNESS NEWS Chief Meteorologist Ken Barlow adds there will be a few showers throughout the day. You can find the current forecast by CLICKING HERE.