A state-of-the-art, life-saving vehicle is ready to respond 24/7 in the west metro. The mobile ECMO truck provides specialized care to cardiac arrest patients. It’s the first of its kind in the world to hit the streets.

“We could not get to patients as early as we’d like to get them, so we decided instead of the patients coming to us, we need to find a way to make our team get to the patient,” said Dr. Demetris Yannopoulos, a professor and the director of the Center for Resuscitation Medicine at the University of Minnesota Medical School.

RELATED: Life-saving SUVs hit the road from the U of M, carrying high-tech medical equipment

Its size is striking and it’s outfitted with technology typically only found in some hospitals. It was designed from scratch with the help of multiple experts to have the power and durability to provide mobile cardiac care, even in the most extreme weather.

An ECMO machine is at the heart of the vehicle. ECMO stands for extracorporeal membrane oxygenation, and it keeps the blood flowing when the heart and lungs fail. 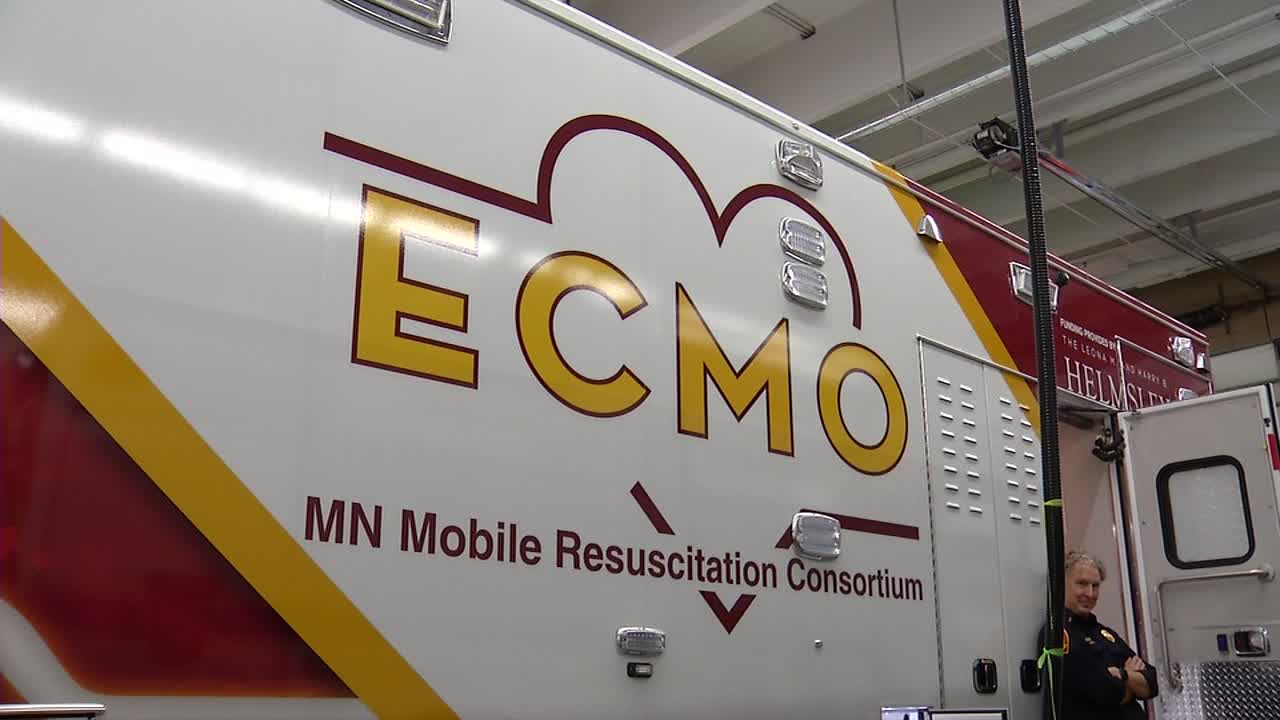 The first-of-its-kind vehicle in Edina is equipped to quickly respond to cardiac arrest patients (KSTP).

“We can take over circulation of the patient by putting tubes inside their veins and arteries, take the blood out and oxygenate it, pump it back in with pressure,” Yannopoulos explained. “Effectively this bypasses the heart and lungs.”

He added, “You have everything you need to survive for days but in this case it gives us the stability to take care of everything else the patient needs.”

It’s been based at an Edina Fire Department station since May. Paramedics have received extensive training to support the medical team that performs the procedure.

“There’s a lot of excitement about being part of a program like this,” EMS Chief Ryan Quinn said. “They’ve hit it head on, they’ve worked hard, and I’m super impressed by the amount of dedication and work that’s been put in.”

When a call comes in, a team of two to three paramedics drive to a designated spot. Quinn explained they use a custom lift to bring the patient up into the vehicle, where Yannopoulos or another physician will work with a Life Link medic to perform the procedure.

“Edina Fire folks will be on the front side drawing up meds and getting all of the equipment ready so that they can perform the procedure with as much support as they can get,” Quinn said.

Once the patient is hooked up to the ECMO machine, they’re transferred to an ambulance. The patient goes to the hospital while the ECMO truck returns to the fire station for cleaning and restocking.

They’ve treated six patients so far. Because it’s groundbreaking technology, ambulances currently meet the truck at the Southdale Hospital parking lot so there are backup resources nearby. According to Quinn, It will be ready to head out into the community after they treat a few more patients.

“We’ll be taking this further south, west, northwest and in directions that we can increase the number of people we help with this,” Quinn said. “The more we do that, hopefully the more the program will grow and hopefully spawn more programs across the country.”

Yannopoulos thought of the idea back in 2017. Engineers started building the truck in 2019. It took about a year and a half to build the vehicle and then its launch was delayed by the pandemic.

It’s a continuation of ongoing work by the Minnesota Mobile Resuscitation Consortium, which launched a fleet of mobile ECMO SUVs in 2019. The MMRC team rushes an ECMO machine to the hospital nearest the patient.

“This is a program that is really unique because it relies on collaboration between multiple medical systems and hospitals and it cannot be replicated easily unless the willingness exists in the communities to actually come together,” Yannopoulos said. “What we have seen is that we have been able to save 40 percent of the patients.”

The new truck takes this response a step further by reaching patients directly. It also expands ECMO access throughout the west metro.

“We do not have a hospital that we can actually collaborate that far out,” he said. “There is a very large suburban population that lives west, northwest and southwest, that could benefit from this.”

According to the University of Minnesota Medical School, this is a collaborative initiative funded by an $18.6 million grant from The Leona M. and Harry B. Helmsley Charitable Trust and in-kind donations from industry and private donors. Other recognized donors are Zoll Medical, Stryker Emergency Care, Getinge Incorporated and General Electric. Health care system partners include Fairview Health Services, Regions Hospital (HealthPartners), and North Memorial Health Care System, with contractual partnership for physician services with M Health Fairview, Health Partners, U of M Physicians, Hennepin Healthcare, and Life Link III for clinicians.