Winston Smith, the Black man who was shot and killed by law enforcement last week at a parking ramp in Uptown, was laid to rest Saturday.

During the ceremony at Shiloh Temple in north Minneapolis, family and friends remembered the 32-year-old, also known as "Weezy," as a good person and a jokester.

"Just getting to know him you find his soul and you know that he’s a good person," said Waylon Hughes, a friend of Smith.

"The talks I’m going to miss, how he uplifted me," said Tieshia Floyd, Smith’s sister. "And I knew he was going through, he knew I was also concerned and worry. But he always says, ‘Don’t worry, I’ve got it.’"

It was also a time for some to echo their calls for justice. 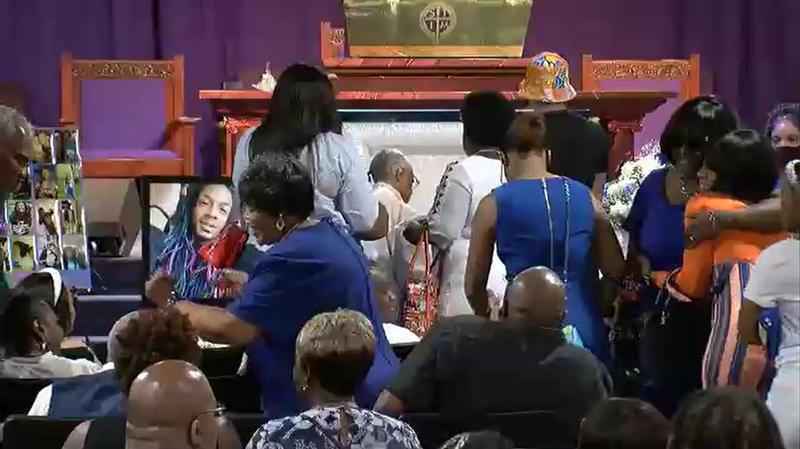 Mourners gather Saturday, June 12, 2021, at Shiloh Temple in Minneapolis for the funeral of Winston Smith.[KSTP]

"When they do what they do to brothers like Winston, it takes all of us as a community to kind of stand up and get justice for him, one way or another," said Kwame Anderson, a friend of Smith.

Investigators say Smith shot at members of a U.S. Marshals Service-led North Star Fugitive Task Force while they were trying to arrest him in a parking ramp.

A lawyer for the woman who was with Smith maintains that she didn’t see him with a gun.

The Minnesota Bureau of Criminal Apprehension, the agency investigating the shooting, said members of the task force weren’t wearing body cameras, and there is no known video of the incident.

The U.S. Marshals Service has said it would allow deputized law enforcement officers on the North Star Fugitive Task Force to wear body cameras, but several agencies have said they would not allow their officers to serve on the task force until the body camera policy is in effect.