Encampment growing in size and concern, talks toward solutions

It’s been growing in size and number of people for almost a year and city officials say it’s getting close to being removed.

Nestled near Sheridan Memorial Park, since late summer 2020, there’s been a homeless encampment in northeast Minneapolis.

Property records show the area people have been living on belongs to the city, but people living there tell 5 EYEWITNESS NEWS they have no plans of moving.

"What’s the point of shutting us down when you’re just going to push us down the road and it’s just going to start up again anyways?" Shane Bennett, who lives in the homeless encampment, said about the threat of city officials removing the encampment.

"I just think we should all work together on this issue," Bennett added. 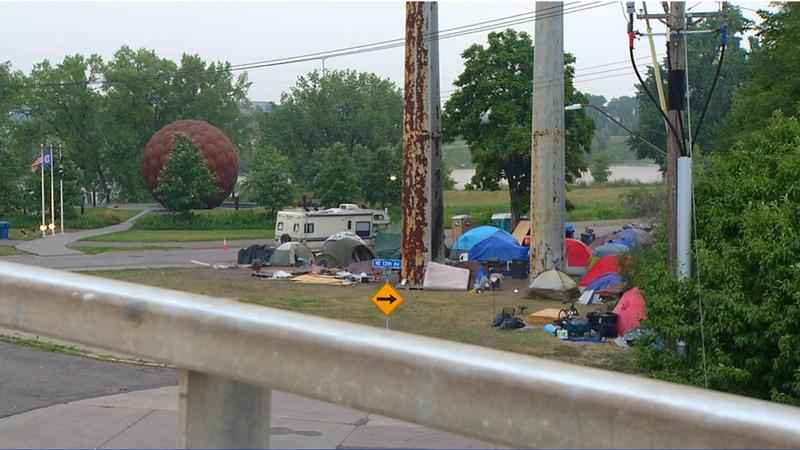 That work has been started and is continuing.

The encampment sits within the city’s third ward, represented by council member Steve Fletcher. In one of his recent community meetings – usually hosted in a casual location where people who live and work in his ward can meet and talk with him – the encampment dominated the conversation, despite it not being on the agenda.

From local business owners, residents, to people who live at the encampment – including Bennett – there were an array of people. Fletcher said at times the meeting got "intense" but was still productive.

One of the local business owners that was there was Rich Waryan – he’s watched and experienced firsthand what he says are negative impacts of the encampment.

"Drug paraphernalia, discarded condoms, discarded evidence of over-intoxication with piles of vomit right in front of the door, piles of human feces," Waryan said about what he’s seen over the last year. His security camera also captured thick black smoke fill the air as a tent burned in early July.

A big reason Waryan attended the meeting was to connect with Fletcher, who he feels has not done enough to get control of the situation. Waryan also mentioned that after attending the meeting and hearing from those who live in the encampment, he has a better understanding of the situation.

"I made it clear to the representatives of the homeless encampment I’m not against them as individuals," Waryan said. "I’m not trying to downplay or dehumanize their situation, all we’re asking for is for things to improve."

That, he feels, happens through our elected officials.

"I was very pleased about how the meeting went," Fletcher said. "We had all those perspectives present, we heard some hard things, and it wasn’t an easy conversation."

Fletcher said over the last year the city has done more to combat homelessness than ever before. While the pandemic – that brought homelessness into a spotlight – sped that up, Fletcher says that work is still happening right now.

"What I think people mean when they say that is that they want us to just go in and evict people (from encampments), and that is something the city did a little bit of, and frankly, it wasn’t a good strategy," Fletcher added.

Thursday afternoon, surrounded by city and county leaders, Mayor Jacob Frey address the issue of homelessness. The main reason was to share resources for people to stay cool during this heat wave – but he also spent time focusing on more permanent solutions.

"We have managed to provide more than 200 additional beds in our shelter system than we had last year," Frey said. He also mentioned that there are currently dozens of beds available and that there’s a 36-bed facility currently under construction.

The city of Minneapolis and Hennepin County have invested $26.5 million to expand and improve shelter and outreach services.

The departments, community organizations, and foundations that have been helping in this effort include:

Since April of this year, Simpson Housing Service has not turned anyone looking for housing assistance away.

Those outreach services are a bit unique in regards to addressing this issue. Officials know – and 5 EYEWITNESS NEWS was told by some in the encampment – that even though beds and shelter are available, some don’t want to go and would rather stay on the streets.

To address that, outreach teams have been connecting with homeless individuals to find out their needs. Not only has that allowed staff to better craft shelters but it’s strengthening trust and moving the city closer to a time without tents.

Frey and Fletcher say there are no plans to remove the encampment – but that if dangerous activity and safety concerns – including the July fire – continue, it may have to step in and remove it.