A crowd gathered Wednesday afternoon at the corner of 50th Street and Wooddale Avenue in Edina to stand up against hate. The community has been shaken by racist, anti-LGBTQIA+ and antisemitic incidents over the last two weeks.

“This should never happen in any community,” said Leticia Guadarrama, who lives in Edina. “Nobody agrees with this, nobody in their right mind would agree with this.”

The rally drew dozens of people who held signs celebrating diversity. Vehicles that passed the group honked in support of their message.

On Tuesday, Edina Police confirmed a rope that was tied into a noose was found hanging at the Edina Community Center. 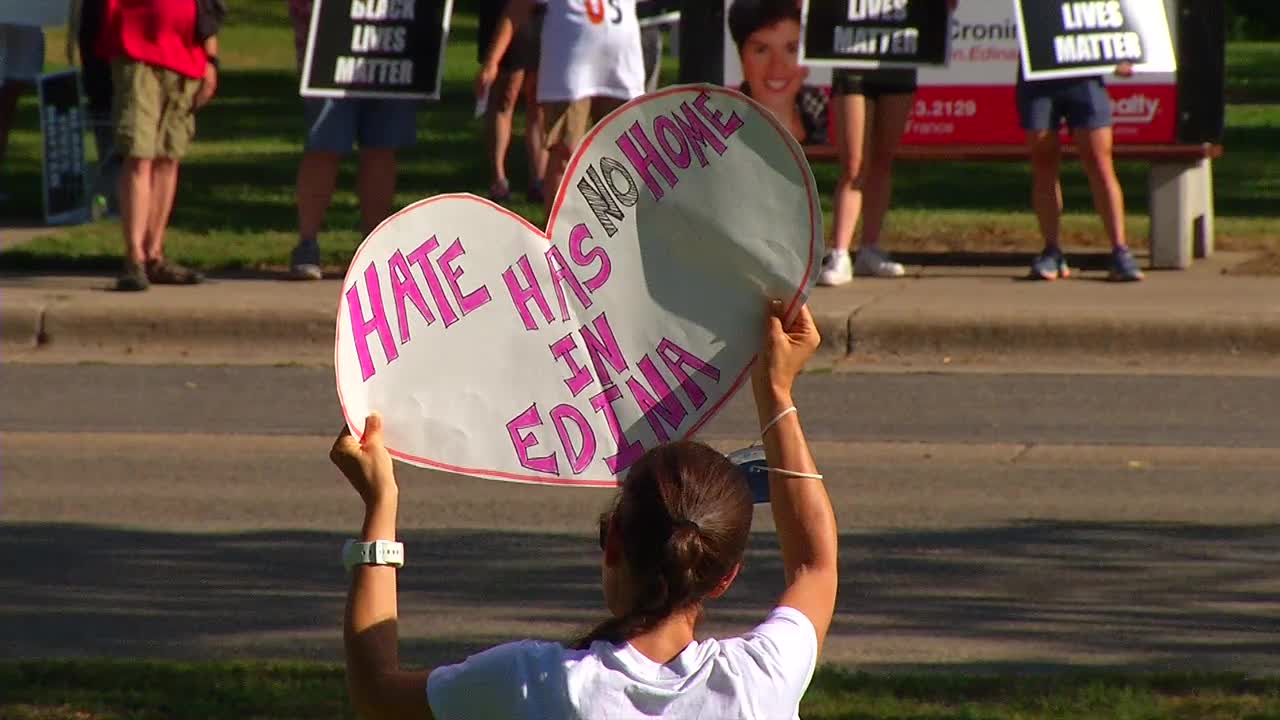 “I am fearful, but this is my community. I shouldn’t live in fear and I just continue saying, ‘I’m not going to be silenced,’ no matter the intent of whoever is doing that is,” said Janet Kitui, who lives in Edina.

She brought her daughter’s Black Lives Matter flag to the rally to confront racism, which she said has been pervasive in Edina Public Schools.

“We’ve been dealing with this years,” Kitui said. “My children have been facing it in school. It’s traumatic for them every time they see this.”

Edina Public Schools Superintendent Stacie Stanley joined the crowd to speak out against the incidents.

She told 5 EYEWITNESS NEWS the district started holding community meetings to develop steps to address discrimination after a racist, antisemitic video surfaced in the spring. The first meeting was held in April and the second took place in June.

Stanley called the incidents over the last week “frustrating” given their ongoing work to prevent hateful messages.

A third meeting is scheduled for Thursday, Sept. 22 from 5-8 p.m. in the Edina High School Cafeteria.

Meanwhile, Stanley said that EPS is working on updating its disciplinary policies regarding hate and threats. A vote on the new procedures is expected on Aug. 8.

“It’s been very encouraging to see the show out today,” Kitui said. “I sure hope that there is meaningful actions that all of us take as individuals and eventually collectively we can start effecting the change we desire.”

“We’re looking for leads everywhere,” Mayor James Hovland said. “We’re just not going to put up with it. We’re not going to let hate park itself in Edina.”

He added, “If you’re the kind of person who has those kind of feelings, you’re not welcome here.”

Edina has also been the target of antisemitic flyers. According to the Jewish Community Relations Council of Minnesota and the Dakotas, the leaflets have been distributed in Minneapolis, St. Paul, St. Louis Park, Hopkins, Edina, North Oaks, New Brighton, Cottage Grove, and Arden Hills.

He told 5 EYEWITNESS NEWS a version of the antisemitic fliers started surfacing about three or four weeks ago in St. Paul and North Oaks. In the last week, there’s been a wider distribution of a new leaflet.

“Same vein, same type of flier,” Hunegs said. “Same M.O., putting a leaflet in a bag with some corn, something to weigh it down, throwing it out into the yard or into the driveway.”

According to Hunegs, it appears to originate from a group based in California. The organization he named has been identified as a hate group by the Southern Poverty Law Center.

“It’s dangerous, it’s noxious, mean-spirited, ugly, divisive, there to sow hatred and discord,” Hunegs said. “So all bad things, right? And then there’s the mechanism in which it’s delivered in the middle of the night, thrown onto lawns designed to intimated people, harass people, annoy people.”

The latest data from the FBI shows crimes motivated by race, ethnicity, and ancestry nearly doubled between 2018 and 2020. Crimes based on religion and sexual orientation also increased. New statistics soon to be published are expected to show the problem is getting even worse.

“For whatever reason, motivated by hatred or malice, these people want to undermine a sense of community and perhaps the most important thing we can say is we’re going to reject it, we’re going to repudiate it,” Hunegs said.