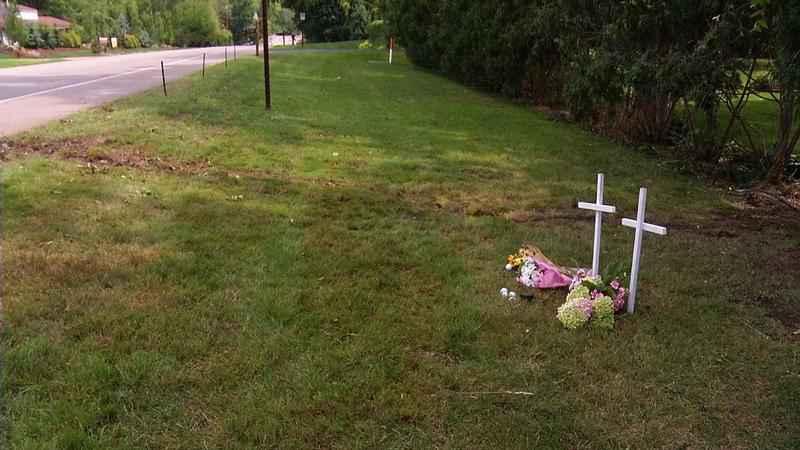 Crosses are seen near the site of a crash in Orono that killed Mack Motzko and Samuel Schuneman.[KSTP]

Lab test results show the man suspected of being behind the wheel during a drunken-driving crash that killed two men in their 20s had a blood alcohol content (BAC) over twice the legal limit.

Additionally, data obtained from the vehicle’s airbag module indicated that Blue was going anywhere from 94 to 99 miles per hour seconds before the crash.

A criminal complaint with charges is expected to be filed by the Hennepin County Attorney’s Office, the police department reported.

Blue turned himself in on July 28 and was booked into Hennepin County Jail on suspicion of criminal vehicular homicide. He was then released from custody pending formal charges.

A police report states that officers responded to a single-vehicle crash around 11:23 p.m. July 24 on the 3100 block of North Shore Drive in Orono. A vehicle that was speeding had left the road and crashed into "several trees."

A 24-year-old man in the front passenger seat — later identified as Samuel Schuneman — was pronounced dead at the scene. Mack Motzko, the 20-year-old son of Gophers men’s hockey coach Bob Motzko, was taken to the hospital where he later died.

The driver, Blue, had been ejected from the car and was also taken to the hospital with critical injuries.

This is a developing story. KSTP will update this story when official charges are filed. Be sure to refresh your page for the latest updates.