A COVID-19 testing company with several locations in the Twin Cities has now suspended operations for a week after the Better Business Bureau dropped the company’s rating to and “F” due to growing complaints.

The BBB Minnesota-North Dakota office joined an investigation into the Center for COVID Control on Monday.

According to BBB Chicago spokesperson Thomas Johnson, “BBB is actively looking into an influx of multiple complaints that have been coming in regarding this ‘F-rated’ business. The company has been unresponsive to the BBB inquiring about the complaints.”

Customers have reported not getting test results, getting inaccurate test results, paying money for expedited results but not receiving them and a lack of response from the company when inquiring about results, according to Johnson.

Beth Steuer from Minneapolis turned to a Center for Covid Control testing site on Hiawatha Avenue after a close exposure. She told 5 EYEWITNESS NEWS she filled out her information online after receiving a QR code at the testing site. 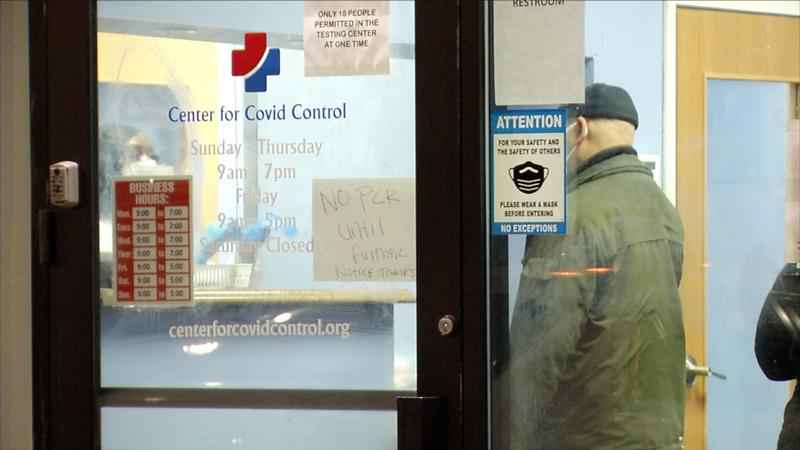 A man waiting to have a COVID-19 test taken stands in line outside the Center for COVID Control in Minneapolis.[KSTP]

“By that time the line was way down the side so I didn’t have time to test so I just got back in my car and left,” she said.

Later that night, however, Steuer said she received an e-mail from the company that showed the results of the test she didn’t take were negative.

“[I was] confused and concerned because I hadn’t given them my social security number or anything but I had given them all of my insurance info and driver’s license photo,” she said.

A spokesperson for Attorney General Keith Ellison told us through email, “The Attorney General’s office is not able to confirm or deny the existence of complaints or investigations under the Minnesota Government Data Practices Act.”

The Minnesota Department of Health, however, said, “We are aware of reports of problems with Center for Covid Control. We have experienced issues with reporting of results from this company. We have been in contact with them and asked them to resolve a number of issues. Clinical laboratories are regulated under the federal Clinical Laboratory Improvement Amendments (known generally as CLIA). Efforts are ongoing.”

The federal Centers for Medicare and Medicaid Services, or CMS, is also involved. A spokesperson for the agency told 5 EYEWITNESS NEWS it has "received multiple complaints from different state agencies regarding the Center for Covid Control and temporary testing sites. Each complaint will be investigated in junction with the ongoing case."

The spokesperson confirmed it received complaints from a Minnesota state agency. According to CMS, the Center for Covid Control is certified by the federal agency and must follow regulations.

The Center for Covid Control has more than 275 testing sites across the country. On Thursday, the company said it’s pausing all operations for the next week. It will use the time to provide additional staff training in sample collection and handling, customer service and "to ensure compliance with regulatory guidelines".

The company confirms it is responding to queries from several public health and regulatory agencies.

In a lengthy statement, the company said over the last few weeks the number of daily COVID tests it’s collected across the country jumped from 8,000 per day to more than 80,000 per day.

“Center for Covid Control is committed to serving our patients in the safest, most accurate and most compliant manner. Regrettably, due to our rapid growth and the unprecedented recent demand for testing, we haven’t been able to meet all our commitments,” said CCC founder and CEO Aleya Siyaj in the statement.

It also revealed the virus has spread among company staff as well, affecting wait times, hours and test result delays.

“For this, we truly apologize and are committed to resolve these recent customer inconveniences and loss of confidence,” Siyaj said

Center for Covid Control said it will still process any tests taken on Thursday or before. The company plans to reopen locations on Jan. 22.