The judge, jurors and attorneys in the Derek Chauvin murder trial will spend the next four weeks in the heavily fortified Hennepin County Government Center, with precautions that are intended to protect them from both people and disease.

Almost 30 people will file into the courtroom for opening statements in the trial of the ex-Minneapolis police officer who is charged in the May 25, 2020, death of George Floyd.

It will be the fullest the deconstructed courtroom has been during the proceedings so far, with all parties required to follow strict COVID-19 protocols, including wearing a mask and staying at least 6 feet from one another.

Holding an in-person jury trial in the midst of a global pandemic has been the ultimate test for the criminal justice system in Minnesota. 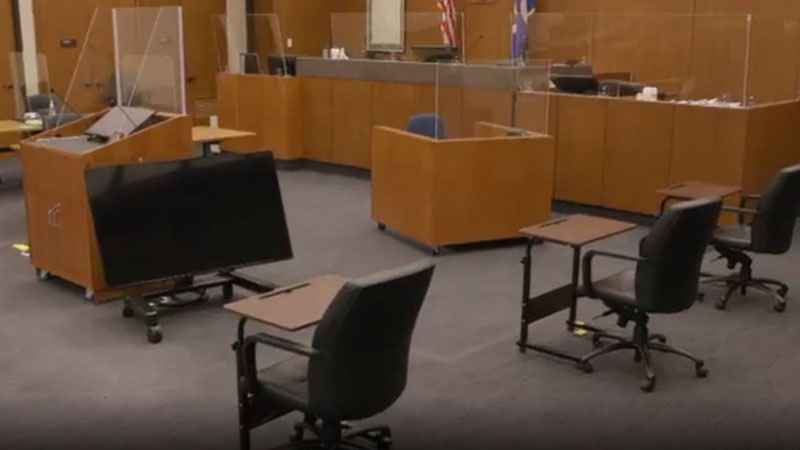 The physical changes to courtrooms and their corresponding price tags are most notable.

Ahead of the Chauvin trial, the county paid $17,250 for demolition work that made way for the reconfiguration of the space, according to a spokesperson. The changes include Plexiglas partitions between the judge, the witness stand and other parties.

The state court administration continues to update its COVID-19 preparedness plan that lays out recommendations for how to hold an in-person jury trial.

But even the best-laid plans can’t stop the spread of a contagious virus, said federal Chief Judge John Tunheim.

"It’s a complicated task to make sure you can adequately protect everyone," Tunheim said.

Despite renovations to two courtrooms in the federal courthouses in Minneapolis and St. Paul, a jury trial was stopped due to a COVID-19 outbreak.

"The last trial we did in November was a difficult trial to complete," he said.

As cases hit the highest levels seen in Minnesota late last year, a juror in a criminal trial tested positive after coming down the symptoms.

"We stopped the trial for a period and had all the other jurors get tested, and two of them tested positive," Tunheim said. "We were able to just barely eek it over the line. If we’d had another juror test positive, it would have been tough to finish the trial."

Tunheim said he worried the two-week break in the proceedings would have a significant impact on the case.

"If you get more than two weeks you’re worried about jurors remembering everything they heard and testimony in the beginning part of the trial," Tunheim said.

Delays can also open the door for a defendant to petition the court for a mistrial, but retired Hennepin County Judge Kevin Burke said it’s "rare," adding that if there was a COVID-19 outbreak during the trial, it would most likely result in a delay.

Judge Peter Cahill has the ultimate say on how to proceed if someone is exposed to the virus in the middle of the Chauvin trial, according to a court spokesperson.