“I think the heightened safety concern regarding covid and the new variant is the main catalyst,” adds Eli Fhima, the Director of Operations for Fhima’s Minneapolis. “I respect that, I understand that — and also the cold weather and the snow.”

The snowy streets are no stranger to Brian Peters.

“We come out and we drive you and your car home,” he explains. “So two drivers will come out, one gets in your vehicle… drives you and your vehicle with you home, and the other just follows and picks up that driver when they’re done.” 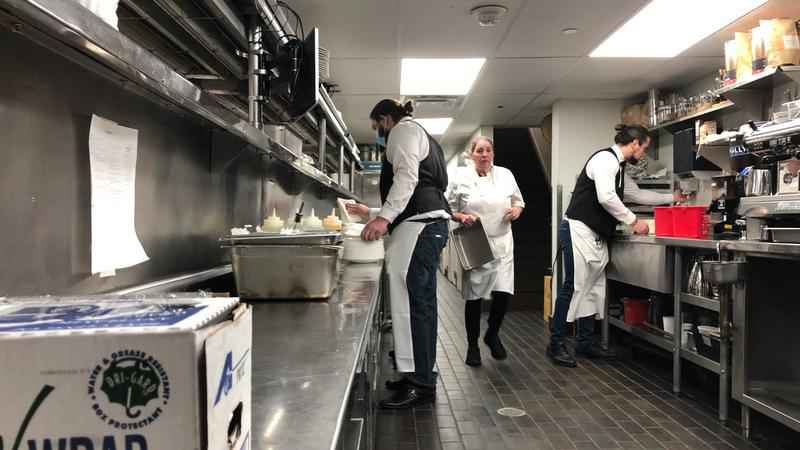 But by mid-afternoon, Peters says eight customers had called to cancel their rides.

"(Said) they weren’t going out tonight, whether it was due to the cold or somebody becoming ill from the holidays,” he says.

In the kitchen at Fhima’s Minneapolis, staffers worked through Friday afternoon and evening, doing food prep and gearing up for about 150 diners, versus three-to-four hundred on a typical New Year’s Eve.

Safety is a big concern here — both for customers and employees.

“We were planning a disco party with dancing and live music. Unfortunately, we had to cancel the disco,” Fhima notes. “Tables will remain but the guests will be further apart, so we’ll leave tables empty in between guests.”

The restaurant planned out new safety protocols, including filling a dance area with tables and setting up private booths and dining spaces.

“We’re mandating masks for our staff and we’re now suggesting the recommended masks for our guests,” Fhima says. “Social distancing goes without saying."

Lush Lounge and Theater is requiring its guests to show proof of vaccination or a negative covid test.

Face coverings are recommended, but not required — and sanitizer stations have been installed in various locations.

"It’s exciting but also terrifying in a lot of ways,” declares Andrew Rausch, Lush’s owner and general manager. “We are taking every measure possible to make sure our patrons are safe, as well as our staff."

Peters says this has not been an easy year.

He had eight drivers working on New Year’s Eve — but says he’s lost 75% of his employees during the pandemic. Peters says he too, is taking precautions.

"We have drivers who are vaccinated or they’re being tested and they’re all wearing masks,” he says. “So we’re all following CDC protocols for that, making sure that we’re being safe."

Fhima is also running the restaurant with a smaller staff — about 15 people versus the usual 35.

Part of that is because of safety protocols, part of it because he doesn’t need as much staff, even on a New Year’s Eve.

But Fhima says he’s lucky. Other restaurants, he says, remain shuttered during this final evening of 2021.