Crews have now cleared a space in Minneapolis occupied by protesters since the fatal law enforcement shooting of Winston Smith six weeks ago.

5 EYEWITNESS NEWS was there as cleanup equipment moved into the so-called Peace Garden Wednesday morning, near the intersection of Lake Street and Girard Avenue in the Uptown neighborhood.

The area where protesters created the garden — part of a memorial to Smith and Deona Knajdek, a protester who was killed in the area by a suspected drunken driver — is on private property.

Some community members and businesses owners said the space has become a hub for nightly acts of violence and lawlessness in Uptown.

The cleanup action Wednesday was initiated by the property owner, Seven Points Uptown, which is a real estate firm that rents space to local businesses. 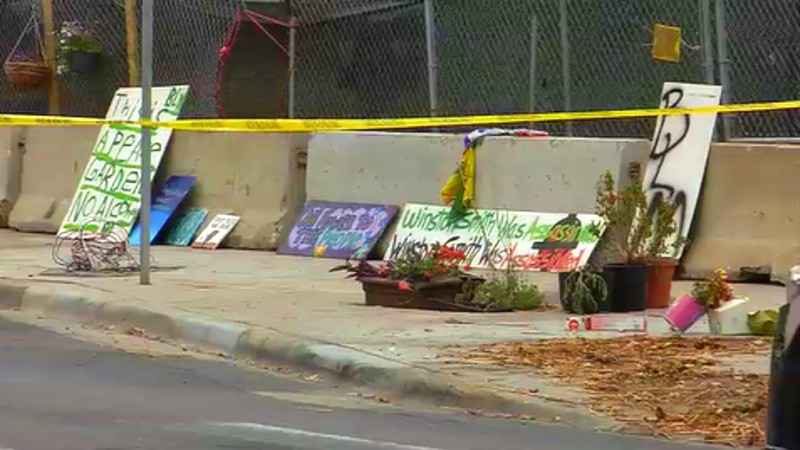 The company released this statement:

"In collaboration with our neighbors, and community stakeholders and the City, today the decision was made to remove the garden from Seven Points private property.

"We previously committed to work to allow a community garden as long as it remained a safe and peaceful gathering space. Unfortunately, that has not happened. The continued destruction of property, violent acts, arson, noise ordinance violations, and blocking access to Uptown residents and businesses created an unsustainable and unhealthy situation.

"The priority must be the health, safety, security, and overall well-being of all of our neighbors, businesses, employees, tenants, customers, and visitors.

"We will continue to work with the families involved and local artists to create a permanent tribute as we mvoe forward with the planning for the future Seven Points development."

The company confirmed it also hired private security in coordination with the city to patrol the block, effective immediately, to boost safety in the area.

Crews started dismantling barricades around the garden at around 5 a.m. Wednesday.

By mid-morning, 5 EYEWITNESS NEWS captured a small crowd of protesters standing nearby, yelling at police on the scene and clashing with other community members.

At one point, a passing driver got out of his car to confront the group, saying, "I need everybody to calm down and get yourself out of the street! It’s OK for you to protest but I don’t want to see you assaulting the officers. I want everybody to stop this violence."

Some Uptown residents believe the clearing of the area should have happened weeks ago.

"We’ve always believed in everyone being welcome and feeling safe in Uptown, so when you have one group of people that’s abusing the rest of the community, that’s got to stop," said Steve Taylor.

Taylor started a Facebook group called Uptown Crime, which has grown to more than 27,000 followers during recent unrest and violence.

"They just wanted to agitate and terrorize the neighborhood," Taylor said of the protesters. "I’m happy finally we got enough community support behind us that it kind of forced them to close this down."

Minneapolis resident and small business owner Nancy Ford said the growing crime in the area has taken its toll on nearby businesses.

One of the people opposed to the clearing of the garden said, "They say they’re clearing all this out because of private property concerns but, clearly, because they go after the memorial itself, it’s about silencing everyone who’s actually trying to get justice."

A Minneapolis spokesperson provided this statement to 5 EYEWITNESS NEWS:

"Seven Points leadership reached out to the City for counsel on how to initiate the process of restoring their private property to a state of full operation for their tenants and patrons. The decision was collectively made to move forward on July 14 with private contractors hired by Seven Points. Minneapolis Police Officers were stationed on nearby streets for the duration of the morning to ensure a peaceful transition. The City of Minneapolis is aligned with Seven Points and the families of Winston Smith and Deonna Marie in creating a permanent memorial dedicated to furthering racial justice and honoring their memory."

Gov. Tim Walz also addressed the recent unrest in Uptown and efforts to clear the protest space, saying the state isn’t directly involved in the ongoing safety efforts but is prepared to assist if necessary.

"We have to have our streets be able to be functioning," Walz said. "We have to be able to address the concerns folks have. We have to be able to create safe spaces for people to express First Amendment concerns to petition their government but it can’t be done in a manner that makes things unsafe. There’s work to be done here and I certainly anticipate that’s going to be an ongoing process."