Nelson recited several instances where Blackwell told jurors the defense had created "stories" or were "shading" the truth of what happened on May 25, 2020.

"I do believe that it constitutes … prosecutorial misconduct," Nelson said.

‘The case is in your hands’: Judge sequesters jury in Derek Chauvin trial 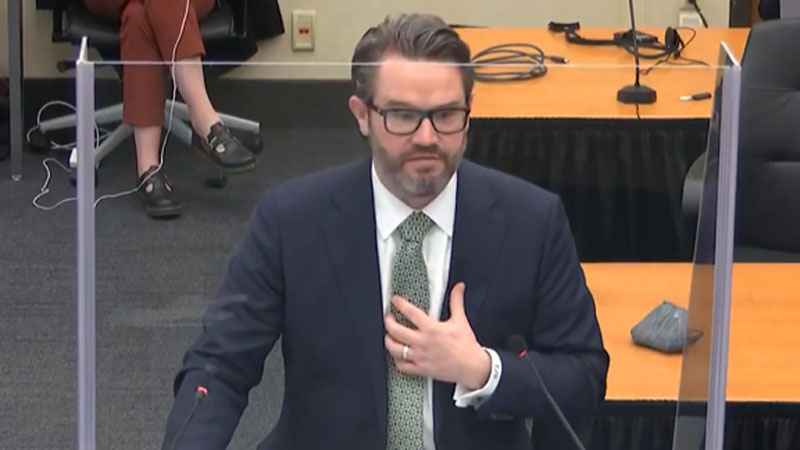 In this image from video, defense attorney Eric Nelson gives closing arguments as Hennepin County Judge Peter Cahill presides Monday, April 19, 2021, in the trial of former Minneapolis police Officer Derek Chauvin at the Hennepin County Courthouse in Minneapolis. Chauvin is charged in the May 25, 2020 death of George Floyd. [Court TV via AP, Pool]

Retired Hennepin County Judge Kevin Burke, who has watched the proceedings, said there are special rules in Minnesota that govern things you are not supposed to say in closing arguments, particularly in rebuttal to the defense’s theory of the case.

"You can be aggressive, but you have to be careful about what you say," Burke said.

Cahill denied the motion for a mistrial, but Nelson tried one more time in light of recent comments by U.S. Rep. Maxine Waters. The California Democrat had joined protesters on Saturday and pressed for protests to escalate if Derek Chauvin was not found guilty on murder charges.

"There is a high probability that members of this jury have seen these comments," Nelson told the court.

The judge denied the motion, but not before saying the Congresswoman’s comments could lead to a verdict being appealed and overturned.

"This goes back to what I’ve been saying since the beginning. I wish elected officials would stop talking about this case especially in a manner that is disrespectful to the rule of law and to the judicial branch and our function," Cahill said.

Cahill has been forceful about his wishes that elected officials, both local and national, refrain from commenting on the case, saying their failure to do so is "abhorrent."

"I think if they want to give their opinions they should do so in a way that’s respectful and in a manner that’s consistent to their oath to the Constitution, top respect the co-equal branch of the Constitution," said Cahill.